Speech on Yoga in simple and easy words 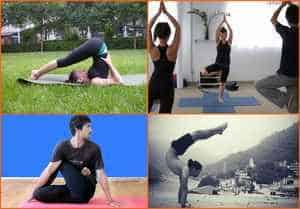 My greetings to everyone present here. Today you all are about to listen something about one of the most divine feelings or experiences in the world that is yoga.

If you think yoga as just a form of body movements then you’re mistaken.

Today as the world is moving forward to the technological and modern future, view of intend to neglect this ancient.

Treasure given to us by our ancestors. Yoga has the power to heal and to take us to divine salvation where the truth of life lies in front of our eyes.

Yoga means Oneness and constitutes the essence of every possible religion, the gist of every Creed and the core of every spiritual path.

In ancient India, yoga was practiced by such sages as Shiva, Ram, Krishna and Vyasa. What Krishna teaches Arjuna is not Krishnaism but just yoga.

The route of Jainism is yoga. Since Mahavir practiced Hata yoga. Jesus Christ even carried out a lengthy pilgrimage with the purpose of studying yoga.

Gautam Buddha studied Yoga throughout his life. Bodhidharma brought Buddha’s Raja Yoga from India to China. In the Middle East countries this practice is known as Sufa.

As the Bible teaches, search men are Samuel or David the prophets very rated to Sufi School. In Tibet people do not call themselves the Buddhists but the yoga practitioners.

Yoga comes from connecting to God just as the world religion means in a western context. There are many schools that are even called sampradajas with different forms of yoga.

All teachings guide and imported spirit in a non-personal relationship to God. The supreme God head resides in every being in its heart.

It seems as if these philosophies were once known all over the world.

Secondly, Niyama – this is the restraint of the Mind by means of its own rules and regulations. It is a form of self purification and involves the study of scripts and holy texts.

Asanas – these are body postures which develop inner awareness and aid in Calming the mind.

Pranayama – this is the rhythmic control and prolongation and restraint of breath. Its name is to discover a subtle psychic force or a subtle cosmic element.

Dharana – this is the Sanskrit word for, ‘ to hold ‘. It is an intense and deep concentration which enables the selected mental state.

Dhayana – this is meditation, contemplation and poised awareness.

Samadhi – profound meditation leads to a state of super consciousness. This state is called Samadhi.

It is the union of the individual aspirant with the object of his meditation or the supreme Universal spirit that is the all-pervasive truth.

We give undue importance to our health in treatment of diseases. A large number of medicine street cure only the symptoms of the disease and not the root cause.

In fact, the cause of mini chronic ailment is still being researched. It is here that yoga therapy comes to our assistance.

Yoga emphasizes treatment of the root cause of an ailment. It works in a slow subtle and miraculous manner.

Modern medicine can claim to save a life at a critical stage but for complete recovery and reasoning of normal health one must believe in the efficiency of yoga therapy.

The yogic way of life includes a code of ethics, regulations, discipline and more combined with prayer and meditation. Even a discussion of the subjects helps one relief mental tensions and change attitudes.

Simple asanas help to stretch and relax the whole body and neutralize tensions. The sincere practice of yoga postures benefits all level of experience.

From the Restoration of balance, flexibility, poise, health and well being to the body, to the cultivation of mental equanimity, emotional balance and inner strength.

On a physical level yoga postures stimulate the glands, organs, muscles, and nerves in which the traditional exercise cannot.

Muscle tightness and strain is quickly relieved and both circulation in digestion improves. Stress related symptoms like poor sleep, fatigue, muscle spasms, anxiety and in digestion are greatly relieved.

Through continued practice of yoga postures, we can have a profound effect on the inner dimensions of life, establishing deep calm concentration, emotional stability and confidence.