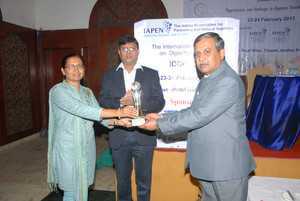 Good morning to one and all present over here. Today as we know is the celebration of the 59th Annual sports meet. Our school……………………………(school name), has been hosting this event ever since.

Sports is an important activity of a school’s curriculum. Hence an annual sports meet is needed in every school. I am ………………….(your name) of standard ……….(standard) and I will be your anchor for today’s event.

Our school invites every year some famous personalities to be the guest of honour. It is done so that we can learn from their lives. How they achieved success. So that they can inspire us.

They are supposed to be our role idols. This year too we have one such personality between us as our chief guest from whose life we have lots to learn. We have the famous cricketer Mr. Mahendra Singh Dhoni.

I will be dedicating a speech in his honour. I will highlight some lessons that I learnt from his life and his struggles. He had been my constant inspiration while playing. I request you to co-operate with me when I am presenting my speech. Also pardon me for any mistake that I make while presenting my speech.

First, I want to thank you sir for taking out some time out of your busy schedule and honoring us with your presence today. We are very grateful sir. Soon our principal Mr……………….(name) will be honoring you with a bouquet of flowers and a memento, just a memory of time that you spent with us. But before that may I have the opportunity of presenting a few things that I learnt from you.

Although we all are familiar with his life and achievements, let me still acquaint you all a little bit about Mr. Dhoni. MS Dhoni was born on 7th of July 1981 at Ranchi in Bihar which is now a part of present day Jharkhand. Since his younger days he was nicknamed Mahi.

Mr. Mahendra Singh Dhoni also has a sister Jayanti Gupta and brother Narendra Singh Dhoni. Admittedly he was a great fan of Adam Gilchrist and his childhood was spent idolizing his later team mate Sachin Tendulkar.

The life of this great personality was not at all easy and was filled with tremendous hardships. Nobody gave him what he deserved. He had to fight for it and achieve it with his hard work and skills. Interestingly in his school day he excelled in badminton and football and played at district level. He was the goalkeeper of the football team.

But the destiny turned in such a way that once he had to fill a position of a wicketkeeper in a cricket match. The coach of the team was greatly impressed by his wicket keeping skills and there after he became the regular wicket keeper for that Cricket team.

From there he just went up in the cricket hierarchy playing with the under 16 vinoo mankad trophy in 1997 and 1998. After this he had his 10th board exams and after which he again focused his attention on cricket.

Because office sports performance was given a job of travelling ticket examiner at Kharagpur railway station under South Eastern Railway in Midnapore district of West Bengal from the year 2001 to 2003. In his job too, he was known as a very honest employee of the Indian Railways.

Well-being on the job he never stopped his cricket practice and always was at his Prime peak form. On a funny note, there are rumors that he and his friends masqueraded as costs around the railway residential complex scaring the night guards. This just proves how humorous and fun loving this great personality is.

Mr. Mahendra Singh Dhoni played several Junior Cricket tournaments for the Bihar team as well as the Jharkhand Cricket team after which he was spotted by Prakash Poddar, the erstwhile captain of the Bengal team in the 1960, when he saw Dhoni on the cricket field playing for Jharkhand at a match in Jamshedpur in the year 2003.

There after he sent report to the National Cricket Academy after which Mahendra Singh Dhoni was recognized and voice quickly picked for the Indian 18 for the Zimbabwe and Kenya tour. There too, he excelled and stunned everyone with his performance.

After that things only went up for him and he started his ODI career playing first class cricket and later was elected as the captain of the Indian cricket team. His achievements as a captain of Indian cricket team is unparalleled till date winning the 2007 T20 World Cup as well as the ICC World Cup second time after India won it under Kapil Dev back in 1983.

We have a lot to learn from this great personality and his life and achievements. Thank you, sir, for being present here. Your presence greatly enlightens the day. Thank you.