Watermelon is my favorite food. It is a large oval-shaped fruit with green skin. It consists of pulpy red color flesh with black seeds.

Watermelon is very rich in water content. It adds hydration process to the human being. Watermelons contain 92% of water. The fruit is related to the cucumber and other fruits. Watermelon is a delicious and refreshing fruit.

Watermelon is rich in fruit because it is high in vitamins. It consists of Vitamin A, Vitamin C, Vitamin B6, and Vitamin B1. It contains 46 calories per cup.

There are lots of benefits of watermelon that will discuss later. Now we will be discussing facts about watermelon.

1. Watermelon is a fruit as well as vegetable

Watermelon is sweet; that is the reason it is majorly considered as the fruit, and they also grow like fruit. It originates from the flower that has been pollinated by bees. If we look from the botanical perspective, they are fruits because they contain seed, but many gardeners grow them as a vegetable.

2. You can eat the whole fruit

Yes, you can eat an entire watermelon. You can consume the inner part of the fruit as well as the rinds of the watermelon. Surprisingly, there are lots of health benefits of rinds. The southern people cook the rinds to make pickles, in the middle east and china; they roast it and make it a snack.

3. They are known as watermelon for a reason

Have you ever imagined why it is called watermelon? Because it contains 92% of the water in it that makes it a perfect refresher for the summer season.

Watermelon has 1200 varieties; to make it a little easier, the watermelons are grouped in 4 sections, Seeded, seedless, icebox, and yellow or orange. Icebox is also famous for mini or personal size watermelons. The most popular variety of the watermelon is the crimson sweet. It is the seeded watermelon with deep red, sweet flesh.

5. The seedless watermelons are not genetically engineered

There was a watermelon that grew at Sevierville, Tennessee, in 2013, which holds the Guinness world record for the heaviest watermelon on the earth. It weighed 350.5 pounds. It is equivalent to an NFL lineman.

Watermelons are a good source of lycopene; it is an antioxidant that has been shown to reduce the risk of several kinds of cancer such as prostate, lung, and stomach.

8. Farmers in Japan have a successful experiment of growing watermelons in different shapes

The farmers of japan are been growing cubicle shape watermelons from the last 40 years. They are forcing watermelons into their square shape by cultivating them in a box like braces. They sell these types of watermelons at the price of 100 US dollars. They have been successful in making other types of shapes like hearts, pyramids, and human faces.

9. A family from South Carolina kept an heirloom variety of watermelon alive for almost 100 years

In 1840, Nathaniel Napoleon Bradford created the unusual sweet Bradford in the summer country, South Carolina. The great-great-great-grandson of Nathaniel is growing that variety commercially now.

10. Watermelons are the official vegetable of Oklahoma state of the U.S.A.

There are lots of health benefits of watermelon. We will be discussing the top benefits of them.

As you all know, watermelon contains 92% water in the fruit. Due to its high water content, it assists to hydrate the body.

The combination of water and fiber means you are eating and drinking high volume without consuming lots of calories.

Watermelon has 46 calories in 1 cup. One cup means 154 grams of watermelon. The calories are meager, and fruit is high in volume. It contains vitamin A, Vitamin C, Vitamin B1, Vitamin B5, Vitamin B6, Potassium, and Magnesium.

3. It Contains Compound That May Help Preventing Serious Diseases Like Cancer

People across the world are dying because of heart disease. Several nutrients in the watermelons have specific benefits of heart health. Studies show that it has lycopene, which may help lower cholesterol and blood pressure.

Other vitamins like Vitamin A, C, B6, potassium, magnesium are also good for your health.

5. Watermelons Can Improve The Digestion

Watermelon has lots of water and a small amount of fiber; both things are suitable for the digestion process.

The fruits, which are rich in water and fibre such as watermelons, are beneficial for your digestive system.

6. Watermelon Is Great For Skin And Hair.

Watermelon contains two major vitamins, Vitamin A and C, which are very important for skin and hair growth. Vitamin C is right for your hair, and vitamin is helpful for your skin. Lack of vitamin A can make your skin look dry and flaky.

Many athletes consume watermelon or watermelon juice after intense training of workout. There is an amino acid in watermelon called Citrulline. It may help reduce muscle soreness. Citrulline is also available as supplements.

Other research has also proved that Citrulline has the potential to improve exercise endurance and performance.

Watermelons are very beneficial food if we use it wisely. They are rich in nutrients and compounds. There are many more facts about watermelons, which have the potential to surprise you. There are also various other benefits of watermelons. Because they contain high water content, they are very easy to consume. They are high in volume and less in calories, so there are lots of health benefits of theirs. The fiber in the watermelon plays an essential role in the digestive system. Therefore, the watermelon is the perfect fruit for the summer season.

Watermelon is juicy, sweet and large fruit. It is very popular among all ages whether children, adults or aged people.

It satisfies the need of quench of summers due to which it is known as summer cooler. Its cooling agents provide relaxation and respite from the burning sun.

Different color watermelons taste a little different from each other because of the substance that gives them their color.

Watermelons are of different types. Some have green rind on the outside and red-pink flesh inside while some have yellow flesh inside too.

This is due to the different enzymes present in them which brings a variation in its color, taste and size. The flesh can be seedless, depending on the variety of the fruit.

Watermelon’s outer rind is not edible but it can be used as vegetable. The rind can also be pickled to preserve it after the addition of preservatives.

Mostly watermelons are spherical, round or oblong in shape and they come from a vine-like plant. They generally grow on creepers but the creepers are not climbers.

Watermelons are bulky and heavy. Thus the tendrils are not strong enough to bear the weight of the heavy fruit.

Watermelons are a rich source of vitamin A, vitamin C, vitamin B6 and vitamin B1. They also have a high amount of potassium, magnesium, carotenoid antioxidant and lycopene.

It is actually made up of 92% of water and 6% of sugar. China is the leading producer of watermelons. Watermelons have very low calories but high amount of vitamins, minerals and antioxidants. 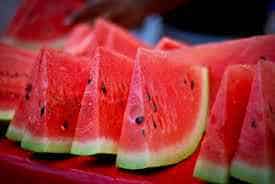 Watermelons have lycopene which is very important for our cardiovascular system. It helps in blood flow and thus improves blood pressure.

It is also good for our bones as it contains potassium which is necessary for the retention of calcium.

In this way it gives stronger bones and joints. It also reduces the possibility of osteoporosis.

Being low in calorie it helps in reducing body fat. Watermelon has citrulline which reduces the accumulation of fat in fat cells.

It is generally recommended by trainers and fitness freaks. It gives you a full feeling along with taste and also helps to stick to the diet.

The water content increases metabolic activities and thus helps greatly in waste emulation. This in turn stabilizes the weight of the person.

The potassium found in watermelons is a natural electrolyte. It helps in the regulation of muscles like contraction and extension in our body.

The health of muscles remains intact. The problems of cramps can be well dealt with by including a healthy diet in our eating habits.

Cramps are generally faced by the aged people due to weakening of joints and watermelon is really helpful for them in curing cramps as well as a number of heart diseases, joint pains, muscular pain etc.

The problem of fluctuating sugar level can also be dealt with the eating of watermelons.

It makes sure that it soothes the taste buds but does not inject sugar in the system as the body is incapacitated to deal with the load of sugar in the body due to the varying secretion of insulin.

The fully ripe watermelon contains the compounds that have anti-inflammatory properties. Thus it also prevents the body from overheating.

It reduces acidity and boosts the immune system also.

The beta-carotene present in watermelon is converted into vitamin A after entering into our body. Vitamin A is essential for our eyes, skin, teeth and bones.

Thus, watermelon indirectly helps in improving up sight. Watermelons are recommended by eye specialists all over the world for the treatment of vision related problems.

Watermelons provide the much needed richness and strength to the eyes for the functioning.

Watermelon detoxifies our system and throws all the waste out in the form of sweat and excreta.

Eating a watermelon is like an internal jogging session as it rejuvenates the organs and leaves the body in a state of fitness and health.

Watermelons have high content of water. Eating it increases the flow of urine and gets rid of fluid wastes from the body.

Vitamin C found in watermelon helps in healing wounds also as it increases the immunity by stimulating the sleeping white cells.

It also hydrates our body in hot summer days. The juice of watermelon have electrolytes which helps in the prevention of heat stroke.

Every year when the kink touches high degree in the summer, people sweat and die. Cases have reported of people falling sick from heat stroke or in critical cases were dying from the unbearable heat of the sun.

Watermelon is a seasonal fruit and is mostly enjoyed in summer due to its cooling properties.

The consumption of watermelon increases drastically in the summer and tends to be less in the other months which initially pulls the supply of it.

Drinking watermelon juice before intense workout helps athletes to save them from muscle pain, regulates their blood flow and maintains a high steady heart rate.

It contains dietary fiber which is very important for our digestive system. The dietary fiber is not a vitamin or mineral itself but it assists greatly in the digestion of food.

There are 1200 varieties of watermelon found till date by the human being. The heaviest watermelon was grown by Lloyd Bright in Arkansas, USA.

It weighed about 121.93 kg. The watermelon is the official state vegetable of Oklahoma which depicts the importance of consumption of watermelon.

This fruit can be classified as a fruit s well as vegetable. It grows from a seed and that’s why it is considered as a fruit.

It is considered as a vegetable because it belongs to the cucumber, pumpkin family. It can be grown in fields like vegetables.

Watermelons are loved by all people. The green beauty tastes amazing and has some extraordinary health benefits. Folks, if you haven’t had a watermelon till now, then you should definitely try.

It’s worth it’s praise. Watermelon will always be my favourite fruit because of the juicy rich taste which tempts me to savour it every time I use watermelon.