We have a very beautiful life given to us. In order to lead a healthy life, we need to be fit. We can remain fit by having healthy eating habits, doing physical exercises and playing sports regularly. This will help us to have a happy life, stay fit and a longer life.

Physical exercises and playing sports are very important for us. This will not only have a positive result on our body but on our inner self as well.

Children are encouraged to play sports from the time they join school. This was why every school has games period in which the students play different kind of sports. Some of them just play to remain fit but some of them take sports as their career. When people play sports regularly, there is improvement in the mental and psychological skills.

They become fit, motivated, confident, lively, courageous and disciplined. This shows that playing sports does not help a person just physically and mentally but there is overall development as well. Despite this some parents do not allow their children to focus so much in sports.

According to them if they do so their academics will be negatively affected. But one should try to understand that just academics or bookish knowledge is not important.

One should be good in other fields as well. Moreover, sports will not be hampering a child’s academics. Instead, it will help in the improvement. There are so many sports which people play both indoor and outdoor. One can learn to play any of them and regularly play it to be fit physically and mentally.

In 1965, beach volleyball had made its first association in California. In the Los Angeles Olympics of 184, the gold and silver medals in the indoor volleyball competition were taken mostly by American men and women. There have been changes in the volleyball from the time it was first invented.

The scoring points and rules were also changed. Many more associations were formed. The two man beach volleyball games got recognized in Olympics.

Rules of Volleyball and how is it played? 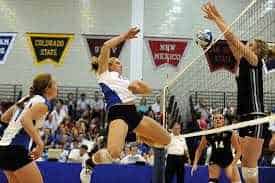 Every sport has its rules so that everyone plays the game fairly and there is no cheating. First, the rules on how to serve the ball. The player can serve the ball by standing behind the end line.

This can be done by overhand or else underhand. The opponents must be able to see the ball clearly before the player serves the ball. After the serve, if the ball drops on the opponent’s side they get a point.

The main serve of the game is decided by a volley. When a team loses they will serve the next game. When a player returns the serve, they cannot do it by an attack or setting. They need do it only by a hit.

Next, the rules are on the scoring criteria. In volleyball, there is the use of rally scoring. The team will get one point when they score on each ball. The team who serves gets a point when the opponent misses to attack back or hit wrong.

While the team who does not do the serve gets a point and also when they fails to hit back or the ball hits the net. The team which reaches to twenty five points first wins that game. It is necessary to win by 2 points to be declared as winner of the entire game.

Each team should have four to six players. When a team wins the serve, they rotate their positions and this is done clockwise. The players should remember the rules while playing the game. A player gets only three chances to hit the ball. They cannot hit a ball twice while in defense.

The hit is legal when the player’s body above the waist hits the ball. If not so the ball is on rest. Sometimes it happens when the ball comes to the players, two of them try hitting the ball. During such situations, it is called only one play but not two. But during the next play they cannot be a part.

It is illegal to carry the ball or palm it or throw the ball during the match. A player’s body cannot touch the net during the game. A play is allowed to serve only the right way. A player cannot block a ball if they are not following to stay behind the ten foot line when their position is in the back row.

Volleyball can be played both outdoors and indoors. The courts in outdoor and indoor games measure (18*9) m. When a person is playing they need to get thorough with the terms used while playing volleyball. Some of these terms are ace, roof, dig, sideout, stuff, kill.

Ace happens when a player serves the ball to the opponent but it drops to their side without anyone touching it. The roof occurs when a player blocks the ball by jumping more than the height of the net. When a player manages to save the ball when it is hit aggressively it is called dig.

Sometimes the team that is going to serve does a mistake and the ball reaches to the opponent it is called sideout. When a player blocks the ball by jumping more than the height of the net and the attacker gets the ball back it is called stuff. Kill occurs when a team hits a ball with aggression and it results in a sideout or else in a point.

What changes has volleyball experienced? 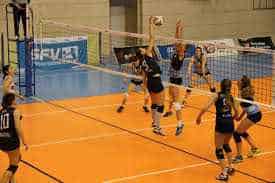 The game of volleyball has undergone many changes from the time it was first invented. With time volleyball started to become famous like boxing, football, handball etc. in the starting volleyball was formed by mixing various games like basketball, tennis, baseball and handball.

The name was given volleyball from mintonette because the ball used to be played by bringing it back and front over the net. The rules which existed years before have changed. At the present time there are many rules and people feel like it has turned to be a different game compared to before one. But even those rules needed changes. Or else people would have no fun to see and play the game.

The measurement of the court has changed. Earlier there were no center lines. The uniforms for both men and women have changed. For girls now the uniforms have become shorter pants or dresses. Earlier they were longer.

The type of ball used in volleyball has also changed. Earlier the balls were heavy enough to be played above the ground. So, the ball for volleyball was made light so that it can be held in the air but not so light too that the game will become easy.

Volleyball has today become very famous. People came to know about this game from the time it had been invented. We can clearly see that it spread all over the world very quickly. Volleyball helps a person to be flexible, coordinate properly and learn to balance well.

Everyone should learn to play volleyball as it is a fun and easy game. It is not difficult for a beginner to play this game. One can learn from the basics and then practice more to become an expert in the game. In the starting a person can learn this game anywhere. It can be a beach, gym, grass etc.