My first trip to Paris, ‘The Capital City of France’. It was the awesome trip to country side. On my birthday my father came to me and said son this is your 20th birthday gift, I was very surprised and opened it carefully, I saw 2 tickets of Paris and I shouted on top of my voice and hugged my father and said THANK YOU SO MUCH PAA.

Then dad in a calm voice said, ‘you can take your best friend with you and enjoy the trip son’.

I literally got excited and called my bestie and in a very exciting voice I said pack your bags babe we are going to Paris.

She thought I am kidding, she came to my house and I showed her tickets and we both started dancing in happiness.

Then after some time we planned that we have 2 days for shopping, we excitedly went for the shopping and had a good time with each other.

Then after 2 days we have to catch the flight at 10’o clock in the morning from Indra Gandhi international airport. We reached our destination in 9 hours. 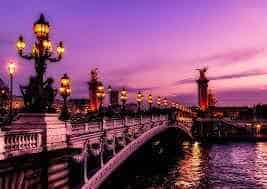 Paris is such a beautiful place. Such a clean and green place.

Then we hire a hotel ‘Intercontinental Paris le Grand’ a fibulas hotel, food is good, then we took some rest the whole day.

Then at night we got ready for a club party which is organised by the hotel itself every day for their customers.

Theirs’s a pool party also, we enjoyed a lot and made some new friends. Next day we woke up late in the morning.

We had some breakfast and then we went to see the Eiffel tower .

There we saw an iron tower which is an Eiffel tower, on its back side there’s a lake on both side, above lake there’s a bridge where couple’s hang the locks for their comfortable love life, but that is banned now a day due to bending of bridge with those heavier locks.

We brought some Paris key chains. Then we had gone for shopping to buy some stuffs for our family and friends. Paris is all about tourist places.

We roam all around the art galleries showcasing some masterpieces of art around the world. One of the famous art gallery is LOUVRE MUSEUM, contain master pieces of iconic Mona Lisa.

Then we had gone to the famous historic place of Paris, a popular landmark too ‘Notre Dame Cathedral’. It is a beautiful cathedral containing towers, gargoyles, huge nave, and ringing bells and marvel.

There are many places to visit in Paris, since we have 5 days more to stay in Paris, we picked up 3 to 4 places per day to visit and enjoy the trip.

Then next day according to our plan we visited PALACE OF VERSAILLES, an amazing place to see the sunning architecture, grand apartments and hall of mirrors.

There’s an amazing transport to see the sight of Paris on HOP ON, HOP OF BUS TOUR which stop at points in city to allow you to see places according to your sightseeing time table.  Then we visited SET IN PARIS which converts life into sets of movies.

Then to see a view of Paris we had gone to PETITE TRAIN DE MONTMARTE, which will take us to the bottom of mount by the iconic Moulin rouge, and give the unbeatable review of Paris.

Then we had gone to ARC THE TRIOMPHE, one of the most photographed landmarks in Paris, we saw some spectacular panoramas and saw the tomb of unknown soldiers.

Next day we visited a great historic monument ‘PANTHEON’. There’s a good thing about Paris that they have road markers to guide the routes. Paris has many buses and local trains but metro is more convenient in Paris for travelling purposes.

I liked the tours by boat for sightseeing in Paris which shows us bridges, monuments, cathedrals and many other historic monuments.

The people of Paris are very sweet and the main parts are Dogs. They are found everywhere, even in restaurants.

Then we visited ‘Le Marais’ which is a home to various bars, hotels, restaurants. This was the best trip with my best friend and the best birthday gift by my father.

During our journey we bought many types of chocolates for our home. We shopped many clothes and stuffs as a memory to Paris.

Then we went back to our hotel, since it was our last day in Paris we took some rest and at that night again we join the club party and went to the pool party of that restaurant which has an amazing open gesture for their customers.

The drinks and food are really good in Paris. The most amazing and tasty dish of Paris that I have never eaten before was BAGUETTE.

We had some time left to see the night life in Paris. So, we went to various clubs that night to enjoy as much as we can.

At night Paris is generally lighted and becomes more beautiful than usual. The bars and restaurants are open whole night.

In Paris Music choirs are very famous. We had gone to bars to specially listen those choirs. There gesture of singing the song was very soft.

People of Paris don’t speak loud. Then next day we were waiting for our flight to return to our own country.

We both wanted to live there more but me and my best friend promised to come next time to Paris to live for more days and to explore more which we were not able to see due to shortage of time.

This was a memorable journey. Paris is a place of love and I had been there for 7 days with my best friend.