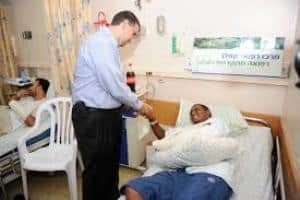 The sick and the injured are given medical or surgical treatment in a hospital. When in good health, nobody likes to visit a hospital, as it is not where you feel at home. But sometimes, our friends or relatives fall sick and are admitted for treatment.

Then it becomes necessary for us to visit them. Last Tuesday, my best friend, Rahul, was admitted in the general ward of Jaslok hospital. He was suffering from some ailment. In the evening, I reached the hospital.

It had a great rush of visitors who were there to meet their patients. Every room was crowded. Even private rooms were crowded. I rushed towards the general ward and came to my friend’s bed. He was sleeping. I found my other friends there.

As we were chatting, he opened his eyes. I sat on a chair and talked to him. He informed me that he was feeling well and would be discharged in a day or two.

I roamed around the building and found that many patients were there in critical condition, though the doctors were doing their best to help them.

As I came to a room, I saw some women crying because their patient had expired .the doctors and nurses were motionless and looked sad. In the meantime, I heard a loud noise that was coming from outside. I ran towards the noise.

A patient was admitted to the emergency ward. He had met with an accident and was seriously injured. The patient was rushed to ICU unit. It was scary to see a person in this stage. Immediately doctor attended that patient.

Somehow I talk with the sister (nurse) she explain me of that patient in quite detail, she narrated whole story that he get slipped from his bike, and now suffering from back injury.

I felt very sad and returned home in a pensive mood.