Why Vat Savitri is observed

As it is a well-known fact that almost all the festivals that are celebrated has some significance behind it. There is a main and a deeper cause that marks the beginning of the observation of the festival. There are stories sometimes more than one story that substantiate why the given festival is celebrated or observed.

And each story more intriguing than the other and more captivating than the previous one. And so, the festival of Vat Savitri also has an interesting and a captivating legend behind it which explains why the given festival is celebrated.

The story dates back to the ancient time, so old that it can be called the time of Vedas and Purana. Yes, the story has its roots to one of the greatest epic ever written. It has its significance mentioned in the epic of Mahabharata. The story begins with the introduction of a childless king who tries all the means so that he and his queen can be blessed with a child.

After a long hustle and asking almost every sage and doing yagna to please the gods, the king and his queen were blessed with a girl child, by the blessings of God Savitri. They were given the boon of having a girl child by the god. And so, pleased with joy the couple named the girl child after the God that blessed them, and called her as ‘Savitri’ to honor the god.

The girl child Savitri grew up to be a beautiful girl with enchanting beauty and even graceful character. When she grew up to be of marriageable age, her father let her choose her own husband, so young Savitri went in search of her husband. After a long search she came across a man named Satyavan. But Satyavan was the son of a king who was blind and that he has been sentenced to live in exile. 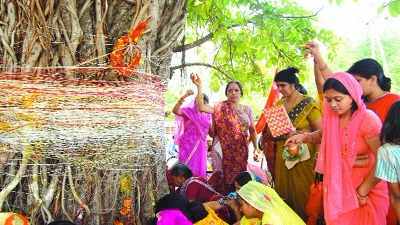 Even though there were many objections on the choice of husband of Savitri, by her parents as well as Satyavan’s; Savitri did not back out from her decision.

As for why there were objections by her parent was that it was prophesied that Satyavan is doomed to die after the completion of one year of marriage, and so Savitri should re-consider her decision.

Savitri did not bother about the prophecy and married Satyavan anyway.

But as it was destined Satyavan died, leaving Savitri devastated; but she did not lose hope and when the god of death, Yama came to take away the soul of dead Satyavan, Savitri went right after him.

There were exchange of words between Savitri and Yama, and Savitri using her wit and excellent style of word power won a boon by the god of death.

He granted her a wish that he shall fulfill but with one term, that she cannot ask for her husband’s life. And so clever Savitri again with the power of her wit made a wish that put the Yama in jeopardy to think.

So, pleased with her and her dedication to get her husband back, Yama granted Satyavan his life. So, the festival of Vat Savitri is observed to mark the success of Savitri, of bringing back her husband’s life back.

This is a festival that is strictly celebrated by the married women.  It was seen that there are many festivals that knows no boundaries and that everyone was welcomed to celebrate the festival, but Vat Savitri has its strict restriction for its observance.

It is a festival where only married woman can take part. And no widow or even young women are allowed to celebrate the day.

Rituals of the Vat Savitri

As for what are the rituals of the festivals that are associated with the observance of the festival. The festival is said to be observed for a period of three days and that these three days of rites are to be performed with utmost care.

An altar is prepared where a picture or sometimes the idol of Yama, Savitri and even Satyavan are kept and worshipped because this is a festival that signifies them and are kept along with rice. There is again chanting of the respective hymns and this is how the festival is carried forward.

Married women gather together and conduct the rituals together. They sing the scriptures, greet each other and pray for their husband’s long life.

There is a popular belief that this festival and the observance of this festival by the married women, will lead to the well-being of their husbands and that they shall live and prosper well for the next seven years. So, the married Hindu women see this day with great dedication, care and love.

Some other rites that are related with the festival is that the married women for this occasion are dressed up in beautiful sarees and are wearing head flowers along with gorgeous gold jewelries.

They hold fast, and the beginning of the fast shall include worshiping the idols and then offering them with fruits, it is said that they serve five different kinds of fruits to the idols and serve them with coconut, which is a must in every occasion. The festival gives the married women a sense of happiness among themselves.