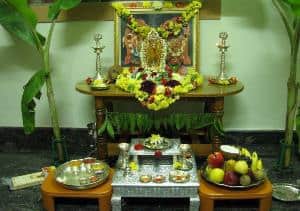 What is Varalakshmi Vratham?

Before digging deep into the significance of this Pooja and how it came to existence and what are the rituals that are to be performed.

Let me just give a brief glance as what this Pooja means, how it looks like. So we know that there are hundreds of Indian gods and goddesses.

Of such many forms include goddess of wealth, learning, earth, pleasure and strength, love, fame, and peace.

There are in total 8 different forms that have been mentioned in the Hindu sacred scriptures. So to name them in the above mentioned orders they would be “Shri, Sarasvati, Bhu, Thusti and Pushti, Priti, Kirti, and Shanti” these are the eight forms or avatar as Tran scripted in Hindi.

During the Varalakshmi Vratham or Pooja it is said that all the eight forms of Lakshmi can be worshiped.

This Pooja is said to be an equivalent form of prayer offered to all the eight goddesses at one time.

This Pooja is mainly performed by married women of the house who pray for the well being of their husband and their life, for obtaining child and even for wealth.

So the married women of the house get up early in the morning and keep fast, they perform all the rituals related to the Pooja and after that they break their fast.

The festival is mainly performed or celebrated by Hindus and is majorly celebrated in the southern parts of the Indian states such as Telangana, Tamil Nadu, Andra Pradesh, and Karnataka.

And it is also seen that this festival is celebrated in some parts of the Odisha and Maharashtra regions.

As per the rituals and according to the said rites in the Hindu Scriptures the celebration takes place in the month of Sawan in the Hindu calendar.

The worship or the prayers can be performed in any Friday of the month. However the auspicious day to perform the Pooja is on the Friday that occurs before the Purnima or the full moon.

This festival has to be celebrated on the day or to be more specific a Friday that falls just before the full moon day.

If we go by what the word Varalakshmi means or what it stands for then the word can be divided into two parts, that would be ‘vara’ and ‘Lakshmi’ the former word ‘vara’ means boon or a wish.

This day if the devotees are performing the rituals with all their devotion and dedication then all their wishes and aspiration will be fulfilled by of course Maa Lakshmi, for whom the Pooja is being conducted and who stands for the second word of the Varalakshmi.

Thus all the married especially the Hindu married women conduct this puja to grant them their wishes that primarily constitute of well being of their husband, children, and family.

And obviously as this is a Pooja that celebrates Maa Lakshmi, who is the goddess of wealth then the wish of prosperous wealth is also in their wish list.

How the day came into existence

As for how the day came into its existence, let us go into the pages of history where in the city named Magadha; the story originally took place.

In that city of Magadha and in a place named Kundina; there was woman named Charumathi. She was a Brahmin lady.

Charumathi was extremely devoted towards her family and would care for them with all her heart and was utmost devotional.

She was witnessed by goddess Lakshmi and she was utterly impressed by her sincere devotion and care towards her family.

And so she decided to grant her one wish, and following that she appeared in the dream of Charumathi. In her dream Maa Lakshmi advised Charumathi to worship with equally sincerer devotion and dedication.

And so the next day Charumathi did as she was advised by the goddess. She was also helped by her family members, they supported her in her Pooja ceremony.

And so the Pooja took its form. Every married woman who participated in the ceremony brought different kinds of fruits and sweets as oblation for the Pooja.

There were many different kinds of sweets that were offered. Another rite that is worth mentioning here is that during Hindu Pooja some form of idol is presented in the altar as a form of the deity herself.

In this case a kalash or a metal pot that is considered to be a sacred object according to the Hindu scriptures is placed in the altar.

It is believed to be a replica of goddess Lakshmi. The kalash is decorated like a lady. It is decorated with a saree and jewelry and placed among flowers.

There is absolutely no restriction as who can perform this ceremony. Women from all creed and caste are welcomed to perform the puja and offer their respect.

Charumathi was advised by the goddess Lakshmi that the Pooja should be performed in the Sawan month according to the Hindu calendar and that the ceremony should be performed on a Friday that is just before the full moon day. And so this originated the celebration of the festival Varalakshmi Vratham.

The Sawan month of the Hindu calendar is equivalent to the July or August of the Gregorian calendar. On 2017 it was celebrated on the August 4th, which was as according to the rituals was a Friday and fell just before Purnima.

As it was mentioned earlier that a metal pot or a kalash is kept at the altar and is referred to as the deity herself.

There are many rituals that goes by step by step that marks the celebration of the day. The pot is offered rice, beetle nuts, rice, and different kinds of leaves that are considered sacred by the Hindu rites.

Some of the leaves are mango leaves. Then there is turmeric that is considered holy that is being offered, along with coconut.

The pot is marked with the swastika symbol that is usually a Hindu symbol that is pictured in every auspicious days and later on the water and rice that were placed in the altar with the pot or kalash are used as an oblation.

The water is sprinkled as a holy water and the rice is used to cook meals for the day.