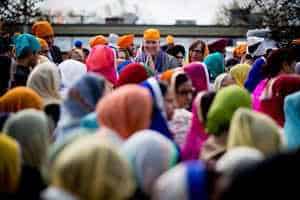 What Vaisakhi actually stands for?

The festival of Vaisakhi is a festival to celebrate the mark of the New Year according to the Hindu calendar.

India however also celebrates its New Year according to the Hindu calendar. There are many states in India that follow the same tradition.

Some states that celebrate the Hindu New Year are Assam, West- Bengal, and Odisha etc. Another aspect of the festival of Vaisakhi is that it is celebrated to mark the harvesting of the crops.

India is primarily dependent on the agricultural means of occupations for quite a long time and agriculture is main source of income for the people living in village.

Farmers look forward to this festival as this means that the crops are prepared and are ready to harvest. And therefore, the festival of Vaisakhi is a mean to begin the process of harvesting.

What are the other stories that are related to the festival of Vaisakhi?

Significance of Vaisakhi for Sikhs

As for the celebration of the festival of Sikh, this has a greater and much more crucial role in the Sikh society.

He is said to defy the laws set by the Mughal kings that was to convert themselves into Muslims.

The ninth leader or Guru denied to do so. He stood for the right of their clan. He went against the Mughal Emperor and started not following their commands.

Due to which he faced lot of problems. There were many sad incidents however these incidents left the rest of the Sikhs to speak for themselves and so the spark that was triggered in them lead to the formation of Khalsa Panth, a unison of the Sikh to come together and celebrate their unity.

There was another incident that followed right after this. And that was the crowning or the coronation of the last and final or 10th leader or Guru of the Sikhs.

The name of the 10th or the last leader was Guru Gobind Singh. The day of the festival Vaisakhi is said to be the day of the formation of the Khalsa Panth.

Usually the day falls on either 13th of 14th of April.

So, there is greater importance of the celebration of Vaisakhi in the Sikh community because of the formation of the Khalsa Panth, it is also referred as the Khalsa Divas, or to be deciphered in English as the Khalsa Day.

This formation is of greater significance that describes the unity of the Sikhs and their power to defend their religious freedom.

The day of Vaisakhi is also celebrated as the beginning of the gravest season, people mainly in rural areas look forward to this day to mark the New Year according to the solar calendar.

The festival usually falls in the month of April. The festival mainly comprises of cutting of the crops and offering the first lot for worshiping. There is smell of sweets that are prepared mainly for this occasion, fills the fresh air.

Significance of Vaisakhi for the Hindus

Although the festival of Vaisakhi is no different when it comes to the celebration of the day. People from all over the country celebrate the harvesting festivals with same pomp and show.

They are however called with different names, and that is basic difference, if one has to dig deep into the difference in the festival among the states of India.

The majority of Hindus celebrate the festival of Vaisakhi, the states that are involved with the celebration of the festival includes, Odisha, Tamil Nadu, Kerala, West Bengal, Uttar Pradesh, Madhya Pradesh, Bihar, Assam, and Punjab.

As previously mentioned the festival is no different when it comes to celebrating and observing the day.

There is cutting of the harvest or the prepared crops, the crops are then sold in the market which brings the farmers fortune and good luck.

The people decorate their home with lights, and beautiful designs of rangoli are drawn on the floor. People are delighted as this is their New Year celebration.

Many look forward to this day as they get the opportunity to get new items or clothes for them as well as for their family members.

They even visit their relatives or neighbor’s house so as to thank or wish them prosperity for the beginning of the New Year.

All in all, there is an aura of celebration of the New Year around 13th or 14th of April, or the month Vaisakh, that will be according to the Hindu solar calendar.

In the train of celebration, different pujas are held in almost every home of the previously mentioned states. It is a form of thanking the mother earth for the prosperous yield of crops. It is specially a happy occasion for the farmers of the country.

The festival of Vaisakhi is however named differently in different parts of the country. It is called Bihu in Assam, Baisakhi in West Bengal for example.

The dates of celebration however are altered in different states. Some dates fall one or two days ahead, and some fall behind. But the essence of the celebration is not slowed in any sense.