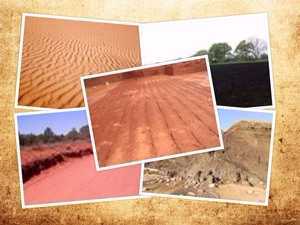 Soil contains a mixture of organic matters, minerals, gases, nutrients and uncountable organisms which altogether helps to support life on and inside earth. Soil is also called pedosphere which is a natural body has four functions as:

Soil interfaces with hydrosphere, biosphere, lithosphere and atmosphere, hence known as skin of the Earth.  Solid minerals and organic matter are constituents of soil and  soil is one form of ground stone  so name given is pedolith as well as soil consists porous those contain gases and water.

Gases, liquid and solid are three states of matter and soil is often treated like these according to situation. The interaction of climate, organisms and influence of these on each other over time soil is produced.

Soil development undergoes by many ways chemical, physical and biological procedures, which include erosion due to weathering.

The reason that soil has been considered an ecosystem in itself, due to strong internal connection and complexity of soil.

50% void spaces and other half is solid and void space is occupied with half by gases and half by water. Solid and organic content is treated as constant, the gases and water amount is highly variable in soil while the balance is always present as one content becomes more reducing the other.

Pores in soil allows water and air infiltration because these are critical constituents for life of soil. The percentage wise distribution of many contents is given below-

Soil supplies nutrients to plants, most of the plants are fixed at a place by particles of organic matter and clay. On clay surfaces having minerals nutrients may be absorbed, bound as dead soil organic matter or as living organism.

Classification of Soil in India based on Region or Area

Covers 143 square km area in India and has 43% of all soil. Spread river valleys and plain regions of north India. Fertility is high as it has lime, organic matters and humus.

The major areas are plains of big rivers like Ganga, Brahmaputra. Sand content reduces when we go from west to east India.

Alluvium is of two type, old is called Bhangar and new soil is termed as Khadar. Color of soil varies light gray to Ash grey. Soil is rich in Potash and deficient in Phosphorous. Rice, Wheat, sugarcane, maze are cultivated in this soil.

Because of ferric oxide its color is Red. Although the lower layer is reddish yellow. Cotton, tobacco, potato etc. are cultivated in this soil.

Also known as regur which means Cotton that means best for cultivation of cotton crop. Deccan is mostly covered by this soil. High capability of water retention.

Name evolved from Latin word ‘Later’ which means Brick. So hard when dried and so soft when becomes wet. Found in areas where too hot and heavy rainfall occurs.

Result of high leaching. Silica and lime will get leaked away from soil. Organic matter of soil will be taken away rapidly by bacteria as it is high temperature and plants, trees will take moisture of soil quickly.

Abundant in aluminum and iron. Has lack of potassium, potash, nitrogen. Color is red due to iron oxide. Cashew, sugarcane, rice are cultivated.

Due to very low rain it has given a new name Arid. Moves by wind activities, has high salt content. Lacks in moisture and humidity. Phosphorous quantity is normal but nitrogen is lacking.

Color changes from red to brown. Impure CaCo2 is high which stops penetration of water.

It is also found in high humid and high rainfall areas. Growth of vegetation in the regions having this soil. Soil’s alkaline nature is due to dead organic matter. Color is black and density is high so it is heavy compared to other soils.