A tribe means a social division in a traditional society. It consists of families which shares social, economic, religious or blood relationships having a common culture and dialect too.

Every tribe has its own characteristics which make them unique to their own identity. The term `tribe` is derived from Latin word `tribus` which means a society. It is used to designate the divisions in society. From Himalayas to Lakshadweep and from Gujrat to North-East they are spread all over India.

India is a democratic country. It has a huge population and it gives each and every section of society equal rights. Tribes contribute 8.61% of total population of India and cover 15% of the country’s total area also. They are known by different names in different places like ‘Adivasis’, ‘upjati’ etc.

`Schedule 5` of our constitution recognizes them as `schedule tribes`. There are around 645 tribes in India. The constitution of India has made special provisions for the development and welfare of these tribes.  Bastar in Madhya Pradesh has highest number of schedule tribes with about 2.5 lakh population followed by Bihar.

Although some states of India do not have any tribes like Delhi, Punjab, Haryana and Pondicherry yet their presence is strongly felt in the regions of Bihar, Jharkhand and Madhya Pradesh. There is a provision of reservation for schedule tribes in India at every level.

There is a considerable difference among tribes. For example, the tribes like Khas or the Lush are economically and educationally advanced to a great extent.

But the tribes like Birhor of Bihar or the Kattunayakan of Kerala are too backward. They live a difficult lifestyle. This difference in their lifestyle makes it difficult for the government to reserve seats. Some tribes which are modernized avail the facility of reservation. But reservation is actually meant for the backward tribes.

Some Indian tribes are still untouched by the modern world. They have no connection with the outer world. Tribes form their own society which is isolated from the rest of the world. They are very poor and dependent on primitive methods for their livelihood.

They are dependent on methods like shifting agriculture, fishing, handcrafts etc. for livelihood. They have their own set of rules, customs, conventions and traditions which they follow in their region. They are famous for their special handicrafts which have become their identity now.

These tribes are self-sufficient, physically strong and have their own lifestyle. Some tribes of Rajasthan are skillful in sculpting iron tools like sickles, knives and tongs. They sell these things in cities to learn their livelihood. Some tribal also sell forest products like resins, honey and medicinal herbs.

They are an integral part of democratic India. Some tribes even took part in the freedom struggle. Birsa Munda, the leader of the tribe `Munda` based in Jharkhand and Bihar played a key role in freedom struggle as well. He wanted agricultural rights for his tribe who were exploited by Britishers vehemently. He did whatever he could for his men. He became famous in the annals of history for opposing Britishers for the first time. 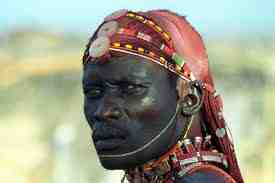 These tribes are under the impact of ` mobility and change` during development. Some converted to Christianity or turned Muslims. And some started working as daily wagers or laborers in factories.

The tribal are facing many problems now because of their poor economic condition. They do not have any permanent income. All their earnings are from temporary jobs with no job security. A major part of tribes is below poverty line. The banks are not ready to land money to them as they are not permanently settled.

Most of the time they don’t own the land which they cultivate for their livelihood. It is extremely hard for them to survive in this ever-changing world. They do labor work whenever they get but what about those days when they don`t have any work. They are daily wagers and earn their breads on a daily basis.

In rainy days these problems worsen when there is no employment available to them. This is due to suspension of all building work in rainy season. The central and state government are providing them employment and other facilities. But somehow the facilities intended are is not reaching them.

Whatever has been done till now is very little to alleviate them from their poverty. Several major steps have to be taken for their upliftment. They won’t be able to experience the joys of a developed India.

First of all, their connectivity to the outer world should increase. They should be shown the dawn of education. Governments should take steps to educate them. Reservation alone will not do. They should spread awareness about the issue. They should ask them to send their children to school instead of work.

The feet of modernization should reach their tribes fast else time will run forward. Some of our own brothers will be left behind in the pursuit of development. A shift in their lifestyle is necessary to convince them to experience technological sophistication.

India is the second largest concentration for tribes in the whole world. Till the tribes are not developed, our country will never be able to see the dawn of development. Tribes should be educated so that they can fit into the mainstream society and accepted by all.

Social exclusion is one major reason that they are not able to into the society. This degrades their morale and is a major blow to their self-esteem. This problem goes a long way in hindering their all-round development.

They should be made to feel equal to all citizens in the country. Equality will help to dissipate their social complex and insecurities. Maybe when our tribes develop into complete societies, India runs strong on the wheels of development.