We live in a country that celebrates a variety of festivals and all of them are celebrated with joy, enthusiasm, dedication and excitement.

The diversity does not act as a barrier among the people from celebrating the festivals. Instead, they learn more about each other’s festivals.

Knowing about different festivals of our country widens our understanding about the various traditions and cultures.

In most of the festivals in the country people observe fast. There are religious reasons behind this observation. One such very important festival in which women fast is the festival of Teej.

It is a Hindu festival in which women fast and pray to Lord Shiva and Goddess Parvati. They pray to them to get blessings from them so that she has a happy married life.

The festival of Teej is of three types and they occur one after the other but after a particular period of time. These three types of Teej fall in the month of Sawan and Bhado according to the Hindu calendar.

They are celebrated in the months of July, August and September.

The three types are Hariyali , Kajari  and Hartalika Teej. Hariyali Teej is also called as Choti or Shravana Teej. It is celebrated on the Shukla Paksha Tritiya. It falls during the rainy season and everywhere there we can see greenery.

On Kajari Teej people worship neem tree. One month after Hariyali Teej is celebrated as Hartalika Teej. This falls on Bhadrapad.

This year Hariyali Teej was celebrated on 26th of July, Kajari on 10th of August and Hartalika Teej on 24th of August.

The festival of Teej is not celebrated everywhere in the country. It is mostly celebrated in Nepal and few of the northern states like Punjab, Haryana, Bihar, Uttar Pradesh and Rajasthan. Every state celebrates this festival according to their own way.

It has been mentioned in Hindu mythology that Goddess Parvati and Lord Shiva came together on this day.

Parvati observed fast for 108 years so that she could prove she loved Shivas and was fully devoted to him. This fast was kept before Parvati became Shiva’s wife.

Parvati took birth 107 times and when it was the 108th one, she was given the gift to become Shiva’s wife.

Her sacrifice and patience for over 107 years gave her this gift. Thus, Teej is celebrated to remember Goddess Parvati, honour her and take her blessings. 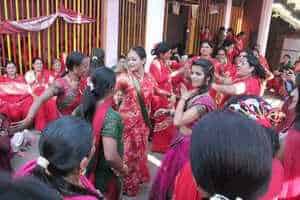 On the festival of Teej, married women worship to Parvati. They light lamps, pray to her and take blessings for their married life to be happy.

On this day the married women get dressed like that of their marriage day. They wear new saris, bangles and other accessories.

They also apply mehendi on their hands. All of them come together and sing Teej songs or listen to stories about Teej.

They get gifts from her parents for her and in-laws. This gift includes sweets, bangles and henna. On the day of Teej the women do not eat or drink anything.

Their last meal is done the previous night. All the women eat delicious food at night after which they listen to Vrat Katha.

In every house there is a beautifully decorated swing or jhula during the festival of Teej. Women enjoy the festival and have a good swing ride.

The women break their fast when the moon comes in the evening. After this they have a grand meal together.

The daughter in law receives gifts from her in-laws as well. This is called shringaar. It includes bindis, bangles, sari, vermillion and mehendi.

Keeping fast the entire day is very difficult. This is the reason why the pregnant are not allowed to observe this fast. But if they are willing t is better to consult the doctor about it.

Nowadays, even unmarried women celebrate this festival. They pray to Parvati and Shiva so that they get a good husband.

Teej is a very important festival in Nepal. The women do a special puja in the worship of Lord Shiva and Goddess Parvati at Pashupatinath Temple.

They take rounds of the Shivalinga. There is a Teej far organized by the Tourism of Rajasthan. It is known as Sawan Mela.

In this Mela they show the different traditions of Rajasthan. They show the jewellery and the state’s traditional handicrafts and art.

Even they get an opportunity to pray for their married life to be happy and get a good husband.

They pray especially to Parvati whatever she got in her life they may also get the same good fortunes. The festival reminds us about the bond of wife and husband through Shiva and Parvati.

The married couples learn to improve their relationship from the example of Lord Shiva and Goddess Parvati.

Parvati sacrificed and kept her patience for so long. This devotion and love for Shiva finally was proved and she got the gift to become his wife.

This makes us realize that no matter what happens in a relationship, the husband and wife should solve all the issues and maintain the same bond till eternity.

This festival is important for the dry states as well. This festival is celebrated during the monsoon. So with the onset of monsoon, people get relief from the extreme heat.

The women enjoy playing in the swings during this festival as it is the time of rainy season. During Teej women are given break from their daily chores and some of them visit their parents at this time.

This is the reason why all the women celebrate the festival of Teej with extreme devotion, joy and happiness.