The Taj Mahal is a story of exemplary love, passion and architecture so much so that it has even legendary folktales associated with it. It was built by the Great Mughal Emperor Shah Jahan in Agra in 1632 in memory of his most beloved wife Begum Mumtaz Mahal.

Today it remains a symbol by which India is known all over the world. As a result, other than being the crown jewel of world heritage and architecture, it also attracts tourists across the globe to the great nation of ours.


The Taj Mahal was built by the fifth Mughal emperor, Shahab-ud-din-Muhammad Khurram, better known as Shah Jahan, meaning ‘Emperor of the World’. The construction began in around 1632 and the project was completed in its fullness by 1653.

It was built by Shah Jahan in the memory of his most beloved of all wives – Mumtaz. Shah Jahan and Mumtaz were known to be very close to each other. She always accompanied him in all his trips. In one such trip in around 1631, begum Mumtaz Mahal fell extremely sick with her fourteenth child and succumbed to this delivery.

It is said that before she died, she requested Shah Jahan to build a tomb for her so majestic that all the mortals could only look at it in wonder and awe. After Mumtaz died, Shah Jahan was extremely morose and had locked himself up behind closed doors for about eight days without food and water. It took a long time for him to come to terms with reality that his beloved Mumtaz had left for eternal bliss.

Then in 1633, he ordered to fulfill Mumtazz’s last wishes and used up the entire exchequer and consolidated the wealth of his empire. He wanted to build a reflection of ‘Jannat’ as described in the Holy Quran, on earth for the mortal remains of his beloved to rest and did leave no stone unturned to do so.


The Taj Mahal is an exemplary improvisation of Mughal architecture of the prevailing time and has certain design cues from the tombs of Taimur, Humayun.S Shah Jahan insisted on the use of white marbles to clad the entire structure of the dome as well as the minarets.

He wanted nothing less than a paradise on earth. Symbolism carved in stone and marble, a heavenly memorial built to the queen of the world. Being a mausoleum, Rabindranath Tagore described it as a tear drop on the cheek of time. 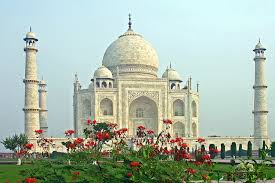 The colour scheme of Taj Mahal is deeply symbolic. The worldly building in the compound is all clad in red sandstone. White is reserved for the mausoleum. This is to symbolize enlightenment – an earthly representation of the heavenly house where Mumtaz Mahal would live for eternity.

The four minarets are earthquake resistant that is, they are built in an outward leaning fashion so that at the time of earthquake they do not fall on the dome and destroy it, and rather they fall outside. To glance on the genius of the architect of those times, we have found that the Taj Mahal has corrected parallax error.

Even if you stand right below the minarets, the minarets won’t seem to taper at the top, instead they would go up in a clear vertical line. This is because the minarets have been made broader at the top and thinner in the bottom. Another special feature of the Taj Mahal is that it is a double dome structure.

Hence its acoustics are perfectly pure and any voice is clearly heard within its four walls. There are certain features about the garden as well. The water fountain in the garden has been so symmetrically placed that it reflects the image of the Taj Mahal true to its form.

The garden has been divided into equal squares following a Persian method of gardening known ‘Char Bagh’. There are beautiful calligraphies in the doorway of Taj Mahal. Even the calligraphies have been corrected of parallax error!

The calligraphy has been performed with such artistic and scientific acumen, that from a distance, they look like a geometric pattern and only when one goes into close proximity to the Taj; it can be deciphered as recognizable characters of the Arabic transcript.

This is symbolic of the celestial pool, where the faithful quench their thirst in paradise. The interior of the mausoleum is a symbolic of the eight paradises of the Quran. Eight chambers surround the central space beneath the dome. Mumtaz’s coffin lies there.

Sumptuous stone flowers adorn the marble lattice work and cover the entire interior of the Taj Mahal. Petra Dura techniques and motifs coming from distant Europe. Mosaics of semi-precious stones have been used in the doorways.

Shah Jahan has used such techniques in the design of this earthly paradise that it truly looks like a treasure chest.

Taj Mahal as a world Heritage

It has been declared a UNESCO world heritage site in 1983 as the jewel of Muslim art in India and one of the universally admired masterpieces of the world’s heritage.

Every year, it brings around 7-8 million visitors and thus is a great source of revenue generation for Indian Government. In 2007, it was declared as h winner out of the Seven Wonders of the World.

Threats to the Taj Mahal


Being such a popular monument and place of public gathering, the Taj Mahal has faced tremendous threats from terrorist groups across the world.

After twin tower attack of 2002 in USA, metal form-work was built around the dome and security was tightened around the entire compound. Certain fundamentalist religious groups have also threatened to destroy it as it is a symbol of Muslim architecture in India.

Taj faces another huge threat from the pollution. The Taj, being made of white marble has tarnished over the ages because of increasing content of toxins in the atmosphere which has given it an evident yellow tint.