Women today are achievers in many fields. They have a career to boast of, a family that they care for, a personal life to handle and with all this, come the balancing act.

Women have to juggle from morning till evening at their work place, again come home, cook food for the family, and make the kids study and then deal with household matters.

It’s definitely not easy being a woman, and more so, if they are career-oriented. Women live on the fast edge and there are many that fall into this list.

From top politicians to experts in the field of medicine, engineering, fine arts, movies, women today are everywhere.

Today many women are accepting offers from Army, navy and the air force and are also expressing their willingness to break the glass ceiling and do things that were traditionally supposed to be done only by men.

Women have conquered the Mount Everest and have done things much beyond that.

A look into the life of Sunita Williams is just about this. Closely following on the footsteps of Kalpana Chawla, Sunita made her mark as the second woman of Indian Origin to be launched into space by the team of NASA.

Sunita Williams, though Indian by origin was born at Ohio in the United States. She was born on September 19th in the year 1965.

Her father was of Indian origin and was basically from Mehsana district of Gujarat. His name was Deepak Pandya and her mother was an American by origin, by name Ursuline Bonnie Pandya. 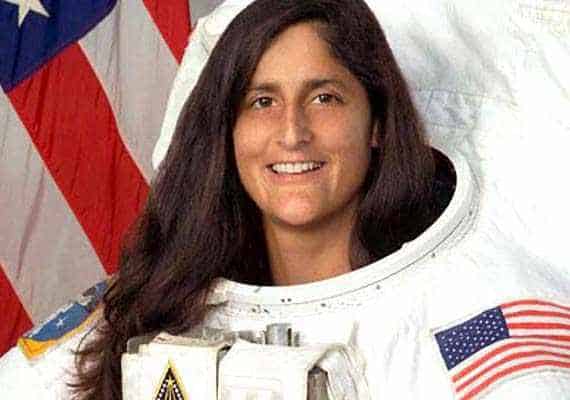 Sunita was the youngest of three siblings, Jay Thomas and Dina Anna. By profession, her father was an Indo-American neuro anatomist.

Sunita did her schooling from The Needham High School in Massachusetts. In 1983, she completed her schooling and then moved on to pursue a Bachelor of Science degree.

In 1987, she was awarded the Bachelor of Science degree in physical sciences and later received an MS degree from the Florida Institute of technology in 1995. Sunita is married to Michael J. Williams who serves as a Federal police officer at Oregon.

Sunita has to her credit, the appreciation of being the second woman of Indian origin to go into space from NASA. She comes next to Kalpana Chawla who was a close friend and guide to Sunita Williams.

Both shared a good rapport with each other and Sunita was quoted saying that she had to continue to fulfill Kalpana’s dreams.

At the beginning of her career, Sunita first worked with the US navy as a basic diving officer and then further moved up the ladder as naval aviator in the year 1989.

She was part of the helicopter combat support squadron and on various assignments; she has travelled to various places including the Persian Gulf areas and the Mediterranean regions.

In the late 1993, she successfully completed the US Naval school pilot test training and after that, she was promoted further as the squadron safety officer. She also served as aircraft handler when she was posted on an assignment to Virginia.

Around June 1998, she was very fortunate to be selected by NASA for astronaut training and the actual candidate training began in August 1998 where she was provided with extensive training on International space station systems.

Soon after the meticulous training, she was sent out on her first expedition with other crew members to the Russian Space Station.

She did her first exploration into space on December 9, 2006 with a fourteen member crew and in the space shuttle ‘Discovery’.

During the mission, she served as flight engineer on the space shuttle and landed back into Earth on June 22, 2007.

In her next mission in September 2012, she was posted as the commander of the International Space station and the four month long expedition concluded on November 19, 2012.

Sunita Williams has many awards and recognitions for her feats and achievements. She has been considered one of the most experienced spacewalkers, a prestigious and pride thing for a woman to achieve.

The government of India conferred on her, the Padma Bhushan award for the immense contribution in her field in the year 2008.

Just three years later, in 2011, she was offered a prestigious medal from the government of Russia for her meritorious work in space exploration.

The World Guajarati Society conferred on her, in September 2007, the Sardar Vallabhai Patel Pratibha award for her excellence in space exploration.

Sunita believes in determination and the right qualification to achieve career goals and earn accolades for being an outstanding performer in one’s chosen field. She has stressed on the need to be determined in one’s approach, in the way one focuses on his/her work.

She has stressed on the importance of making the right decisions in life. Right decisions lead to working out the right action plan and then moving up the ladder to achieve the dream sought after.

Sunita has said in many interviews the need to think out of the box and do something that the rest of the world may not do.

She has said about herself as being the girl-next-door and a plain Jane herself, but she never missed any new opportunity that came her way.

Sunita looked at new opportunities as chances to learn something new, to explore option to see if she could try out and make something new out of it and so on. She never degraded any opportunity that she saw coming and always put it into best use. She did her work with confidence.

There goes a lot of hard work and dedicated approach towards focusing on the goal, and definitely trying out things in a different, unwalked path.

Sunita was one of those gifted people who had the golden opportunity of viewing sixteen sunrises and an equal number of sixteen sunsets while she was space walking during her space exploration mission. In many interviews, Sunita has stressed on the importance of education in a person’s life.

She has talked about being qualified to take up the challenges of life. She has told that education is the pathway that leads to a door that can open a plethora of opportunities in a person’s life. Being educated lets a person know about what he is and what he is capable of doing.

Every person is born simple, but his attitude and determination in life mould him into his future personality and this is what we can see and learn from Sunita.

Sunita herself has admitted of being a very simple girl by nature but she believed in dreaming big. She did things that other girls of her age dared not to do.

She went on the path that nobody else dared walked on. She has done many marathons in space and has achieved feats for the same.

Not every day do we come across a person as enriching as Sunita Williams. In these days, when career is a norm for every girl to be independent and stand on her own feet, Sunita is sure a great inspiration to many girls. Sunita has encouraged girls in particular to be well educated and follow their dreams.

She has tried to enthuse scientific curiosities in young minds and stressed the importance of scientific reasoning and thinking.

She quoted her own example and said that when she joined the US naval academy, there were only 10% seats that were taken up by women. Others were all occupied by men.

That was because women did not come forward to try unconventional things and hence thought of such areas as only-men zones.

They restricted their thinking to jobs that women managed very well and never gave thoughts to out-of the- box thinking.

Over the years, she has said that the scene is slowly changing. She is happy with the improvement in ladies enrolling at the US navy school. The figure has almost doubled up from a mere 10% to a 20% enrolment, meaning a rise in 10% overall.

Sunita has attended many conferences in India and each time, motivated young minds, and in particular girls, to opt for unconventional fields and think differently.