India is a tropical country that has a variety of seasons. The hottest and most important of them is the Summer Season. Most parts of India face scorching sun and heat waves during this season. Even in most of the parts, the temperature can cross 40 degrees. The South part of India is the hottest region of India.

Apart from the heat, the summer season brings a lot of occasions to celebrate as well. It starts in March and ends in June with the end of summer vacations in most of the schools.

People prefer wearing light-colored cotton clothes. These clothes help in maintaining the temperature of the body, and they absorb the body sweat as well. In summer the days are longer than the nights.

We need to take care of our health in the summer season. It is advised to drink a lot of water and eat healthy food. We should also limit the use of oil in our diet. Lack of water in the body can result in feeling tired and dizziness.

It is also the season of fruits. Mango, watermelon, papaya, guava are all available in the summer season.

According to one survey done in India, the second-deadliest heatwave occurred in April and May of 2015, which resulted in deaths of over 2,000 people.

Effects Of Summer Season – Effects on the human body –

Effects on plants life and animals

The following festivals are celebrated in the summer –

As the summer season begins, there is a gradual increase in outdoor activities, and everybody spends their time going on picnic and beaches.

Summer camps are also organized to provide training to the students, and these courses include extra circular activities like personality development, dance, music, judo karate. It also includes sports like hockey, cricket, badminton, football, tennis, and golf. Water sports are also very famous during the summers.

As we have talked about the brighter side of the summer, it’s time to talk about its dark side.

Effects On The Indian Poor In Summer-

The temperature in summer is very high, but it only affects the lower class of society like the poor and the homeless. They suffer the most as they don’t have shelters, and they have to work hard in the scorching heat. It is the reason they fall sick so quickly, and in severe conditions, they can die as well.

Life is not easy for them, because they lack water, electricity and health care facilities. More exposure to the sun can cause kidney disease, micronutrient deficiencies, and more cognitive damage.

This season can be enjoyed by taking precautions. It is the season of holidays and festivals as it spreads joy and brings prosperity. We should complain less and enjoy our time with family and friends.

Summer is also suitable for learning good habits and new skills which will benefit you for your whole life. Summer is also an excellent time to explore other cities and countries and make memories for ourselves.

Summer is also considered as the best time to lose some body fat. Many people start dieting in the summer by cutting out oil and sugar entirely from their food and prefer eating raw vegetables and fruits. They not only help to maintain water in the body but provide essential nutrients as well.

As summer is a difficult time for everyone, we should keep food and water for the animals and birds on our terrace and also outside our home. We can also build a small house for them where they can live and protect themselves from the heat of the scorching sun.

Summer season is one of the four seasons that occur on the Earth. It is the hottest of all the season and comes after spring leading to autumn. Usually, it starts from March, and extends till late September. The beginning of Holi usually marks the onset on the Summer season.

The sun rays glisten like powdered gold and the world smells of joy. It ends with the onset of monsoons and heavy rains. Summers brings about different kind of imagery in the mind’s eye. Summer means joy; summer means warmth, summers means blossoms.

Summer season is caused because of the tilt of the earth. These tilt was supposedly caused because of an asteroid hitting the earth and slanting it 23.5 degrees away from its axis. On the course of revolution of the earth, when the tilted side is closer to the Sun, we experience summer, marked by a significant surge in the atmospheric temperature.

During this period of equinox; the Sun positions itself directly over the Equator. The days become longer while shortening the nights. This season also accommodates the longest day on the year (longest duration of daylight from sunrise to sunset). 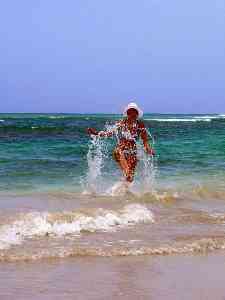 Summer season, although being the warmest of all seasons is liked by many and is of special fondness to young kids. Just like them we as grownups surely must have many memories and experiences which even today remind us of those warm Summer afternoons of laziness and ice-creams.


summer season is one of the greatest of all seasons and gives us immense avenues of enjoyment. However, just like everything in the world, it too has a few disadvantages.

Summer season is my favourite season of all four seasons. It is related to numerous memories of my childhood and each year during summer; all those memories come back to me in a magically nostalgic experience that cannot be described by words.

No tongue in the world has words with the audacity to be able to enumerate those joyous Summer afternoons of playing with friends; those tiring sweaty days that ended with cold sugary drinks; those lazy warm afternoons that made us sit indoors and drool on storybooks; jumping into the cold water pond with friends for bathing; those long evenings of fishing with father and cursing the fishing for not picking the line; all of these experiences is what that has brought this bright sunny season closest to my heart.

Every summer of my life is clearly etched in my memory and each of these passing summers keep me anticipated for the next year.To end, I would use these marvelous words of Neruda which aptly describes summer:

“Green was the silence, wet was the light;  the month of June trembled like a butterfly.”