Essay on How to get Success in Life 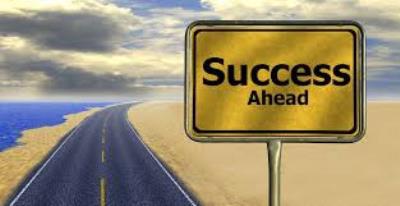 We all work towards achieving our goals in order to succeed, to knock on the doors of success. Success can be described as the feeling of having achieved the desired goal and having accomplished the undertaken task.

Success can be attributed to many factors such as determination, dedication, sincerity, commitment, persistence, consistency etc. All of these factors, when applied in the right measure given success as the output. Whether luck has a role to play in one’s success purely depends on their own belief systems.

When a child is born, he is given a name, he is slowly taught to walk on his own feet, sent to school, engaged in sports, in co-curricular activities, he is also sent abroad for his higher education. Right from the time the child is born till he develops his own niche to live independently on his own feet, he is mentored by his parents.

Why do the parents take so much care of their offspring, why do they think twice before choosing every step for their children? It is simply because parents dream of their children’s success. All parents simply wish and want to see their children becoming successful. So how exactly is success measured comes the next question?

Success means different things to different people. Some people might earn degrees with high percentages and then land in big, corporate jobs with hefty pay cheques. This could be the meaning of success in their life.

Another person may be quite happy with his job, but he thinks of success as getting married and settling down with his children in his own home.

According to this person, success has a different meaning. In both scenarios, people have reached an upper position which is somewhat recognized, probably it took a lot of efforts to reach that top spot, reaching that position higher up the ladder itself may have amounted to what they think as success.

In general, if we see a person who is quite popular and is happy with his achievements, we call him a successful person. Any big actor or actress who has made a mark in films is said to be successful in life.

Usually people who have achieved laurels in their chosen fields are said to have emerged successful in life. What is that one factor in them that makes us call them successful people?

The fact that they are recognized, they are confident in their own fields and have achieved something and become extraordinary.

Between successful people and ordinary people like us, there is a thin line of difference. All of us have twenty four hours in a day. Beyond twenty four hours, nobody is granted even a second more on privilege. It’s the same with everyone and everywhere.

What sets successful people apart is their effective utilization if the same time. We may sit lazing around in our couches for hours together, but a person wanting to taste success would be working on his goal, trying to make it true. APJ Abdul Kalam was a very successful person in his life.

He achieved laurels as a scientist and also as the President of India. He was an extraordinary man. He rose from the ordinary but made his path special by showing a desire to make it big.

That inner desire creates a strong goal to be achieved. Then, the mind starts working and thinks of the dream all the time. Any hardships, any setbacks don’t bother the mind and its keeps moving forward to realize its dream. Once the dream is achieved, it has reached the level of success.

There are successful people in almost all areas and fields. People become successful in their ways, they show that they are able to do something which nobody does ordinarily, and they go a step ahead, push themselves towards the goal and never stop or look behind.

Supposing a school student wishes to see success in his exams, he puts a goal in front of him to achieve success in his final exams. What the guy does is, he first prepares a time table to organize his studies. In this way, he is able to break down his task so that it becomes easy to manage the study load.

Good preparation translates into improved confidence. Next comes the tale of memory. Good memory helps in recalling the learnt matter and putting the content on paper. Presenting answers in the right way, to the right extent leaves a good impression on teachers. A good handwriting basically gives a good first look to the teachers.

So basically, as the saying goes, practice makes a man perfect. It is with everyday efforts, with sincerity and perseverance that anybody reaches success. Having a goal to achieve is one of the first steps to taste success in life. Without a goal, life goes haphazardly without direction.

A goal in life brings in a definite goal to work on. Goals create roads to walk on and make our dream come true. Determination and dedication are key words in the dictionary of success. We must be determined to reach the goal we have set.

If we have set a certain goal like cleaning the house in the evening, then it takes some efforts and determination to set out ourselves to do the task.

If we bring in our laziness and don’t stand up to do the task, it becomes a pending work and all the energy goes for a waste. If we channelize our energy and put it into effective use, then we can see amazing results.

Dedication towards our work calls for discipline in work. If we have decided to complete a certain chapter on a particular day, then it is our duty to make time for the task and achieve its completion. Consistency is another important word to reach the ladder of success.

We must be consistent in our efforts, in our performance to be able to rise up stairs in the ladder. Time management is the most effective tool and key for reaching success.

If we have organized our time effectively so that we can go that extra step and do something additional, then we have set ourselves different from the rest of the crowd.

Finally, success relies on a lot of hard work. There is no success without hard work. If a man is rich and successful with a big bungalow to live in, lots of money, jewellery, high position, all this would be in his purse only because he would have worked hard to earn them.

Without a boat to sail on, we won’t reach our destination. Having the boat would be of no use if we don’t put efforts to sail in that boat. Hard work is like the base of a long pillar of success.

Success is like a ladder. It is a definitive spot at the top and the intermediary steps are all small achievable leading to the final destination of success. There may be many occasions when we would rise in happiness, but also certain other times when we may fall down due to various reasons.

There is no person who has tasted success without having fallen down in the process. Falling down may be a common thing, but the determination to stand up again gives the courage to move forward. Even with plenty of downfalls if we are able to rise up each time, then we become powerful from inside.

There is learning associated with each fall and that learning enables us to push ourselves further towards our goals. There are many successful people who spend sleepless nights in order to work towards their dream. That burning desire inside our bellies, the strength and courage to achieve our dream causes a fire in our minds.

That fire should be kept alive to reach our goals and taste success. Success is a journey and it’s never a one stop destination. Also, accepting success with humility makes the feeling of achievement even more worthwhile. Success as it is measured with not just money, but the inherent happiness that comes with it.