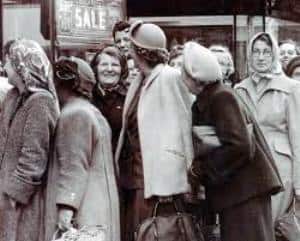 People have lost patience and hence this quarrels everywhere all the time. Yesterday, I was going to the market to purchase some books. As I reached the liberty showroom, I saw some people exchanging hot words among them –slaves.

I approached to find the cause of the on-going argument. I was told by one of the members of the crowd that customer had purchased a pair of shoes for his daughter. On reaching home, he found that she were a little loose for his daughter.

The man came to exchange the shoes. The shopkeeper, however, refused to change the same and reminded him that goods once sold were not returned. The customer argued that he was not returning the shoes but rather exchanging them.

But the shopkeeper was adamant and refused to replace the shoes. The customer then lost his patience and hot words were exchanged. In the meantime, a large number of people had gathered around both them.

Some sided with the customer, while some spoke in favour of the shopkeeper. The heated argument between the two ultimately led to their trading of fists and blows. The staff of the showroom also sided with their employer.