The street beggar is indeed a sad sight. Some are young children, some are men, and some are women, with children in their arms. Some are physically challenged.

We see so many of them on our streets. But what can we do? Can we give food, cloths, money to all of them? It is reality that we can’t do anything for them, but as we can take initial step to decrease the numbers of count of the street beggar in India.

Many street beggars sleep on the footpath or on railways platforms at night. Some of them sleep in empty bogies in the railways work sheds. They live from day to day and hand to mouth.

Very often they go without food for days. They have no place to bathe and so always look dirty. The worst time for them is when it rains or when it is very cold. Some of them die due to the severity of season.

Many of them have families, and every member of the family begs. This because they are not able to afford education for their children. So the children learn to beg from an early age

We hear many cruel stories about street beggars. Sometimes their parents purposely cut off the hands or fingers of their children to force them to beg. People take pity on their state and give them money.

India is developing country, but indeed our country has not taken any crucial step to stop poverty, there is incredible rise among street beggars. 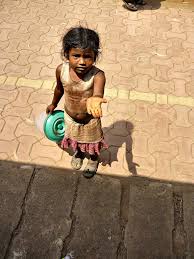 Yes I’m concern about people sympathies, but one should understand the worst effect of it. We should not encourage them.

Especially the temple authority should take initial step to stop the beggars to beg in front of temple. Like in the Jammu, at “Vaishno Devi” temple there is a warning board that one should not encourage the beggars.

As long as the government and NGO’s do not take purposeful steps in this regard, these unfortunate people will continue living such pathetic lives.

Life of Beggar is very typical; they live in the society only to fulfill their basic needs (food, cloths, and shelter). They have no future motto to do so.

A beggar wakes up in the morning, and his primary goal throughout the day is to get at least one time meal (food).

Usually they wake up early in the morning, and start their business (begging). All beggars have their choice of area to beg. Most of them are found on the traffic signal, as soon as the cars (vehicles) stop they turn to be active and start begging.

By knocking the mirror of the vehicle they usually attract the individual. It is very common to see a lady with small baby. Really has become a fashion that a lady will carry a small baby, just to get attention from the individuals.

In whole day the beggar earns up to 100 to 200 rupees (It is not approximation) it’s a just assumption.  Most of the individuals don’t give any money to them, instead of giving biscuits or eatable product.

In fact it is good that one should provide some eatable things instead of money.

Nowadays begging is turned to be a business for many of them. Couples of year back, a beggar was interviewed by reputable media channel, and the beggar revealed that he has bought a flat, just by begging.

You can see many beggars wandering here and there. They are found in plenty at bus stops, in markets and streets. Even though begging is a crime in India, the number of beggars goes on increasing. Many of them are lame, crippled or blind. They deserve our sympathy.

But a majority of them are healthy and do not deserve our sympathy. Some even pretend to be handicapped.
I know a beggar who visits our street every day.

He comes in rags with shaggy hair and old, torn shoes. He has only one leg and moves on crutches. He carries a begging bowl. He begs for alms a sing-song way. He always sings devotional songs.

His voice is very sweet. People pity him and give him money, flour, flood or clothes. Many times, when he shivers with cold, I give him clothes.

Many street beggars are thieves too. They try to steal things, whenever they get a chance. We should be aware of such type of beggars. We should help only those beggars who are disabled and cannot earn their livelihood by owing any kind of work.