States and Capitals of India | Union Territories and their Capital 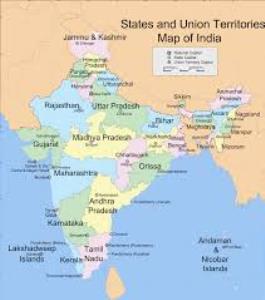 New Delhi is the capital of India. The central government in New Delhi takes care of welfare and security of the people of India.

India is a big country. Like all big countries in the world India is also divided into different states. The states have their own governments. India also has a few union territories.

The union territories are governed by the central government. Formerly, Delhi was a union territory but some years back it has been awarded the status of the national capital territory.

Rajasthan is the largest state, while goa is the smallest state. Uttar Pradesh is the most populated state while Sikkim has the lowest population.

Among the union territories, the Andaman and the Nicobar Islands are the largest. Lakshadweep has the lowest population and is the smallest islands.

India is divided into states on the basis of the languages spoken. A person from Punjab speaks Punjabi. Likewise, a person from west Bengal speaks Bengali different languages, have different customs, eat different kinds of foods and wear different clothes.

Yet, we are all united as Indians as we all belong to this country called India.
Everyone feel proud to be an Indian first and then a Gujarat or a Punjabi or a Rajasthan. We must respect one another and remain united as Indians.