Today, soccer has become very popular in the countries of America and Europe. The history of soccer is very interesting and different compared to other sports in the world. It is said that soccer was first found during the second and third century in China. It was the time of the Han dynasty in China that time and it was found that people were playing with leather balls and kicking it towards a small net.

It has also been found that the Greeks and Romans played with the ball for fun and enjoyment. According to the facts, people used to kick the ball at Kyoto in Japan and this became a very popular sport. Slowly, soccer started to experience growth in England. The ball which was first used is supposed to be the head of one Danish brigand. Earlier soccer had many illegal practices in which people were allowed to bite, punch and kick.

But the aim of the game was the players had to bring the ball to their target place. People started liking this game a lot and so whenever there was a soccer game, they would come to watch and the place would be crowded. But sometimes the game would turn out to be serious and there was violence during the game. Soccer was loved by soldiers. They loved it so much that they used to miss their archery practice in order to watch the game.

As the game started to become violent and fierce, King Edward III barred the game in the year of 1365. After this order of King Edward III, in 1424 King James I of Scotland declared that no one should play football. From 19th century, this game became popular even in schools and colleges.

Both the schools and colleges had different groups for the matches. The clubs and schools met together to make rules for the match. The game of soccer’s foundation was done in 1869. This year it was decided by the Football Association that the ball would not be allowed to handle the ball in any manner.

Further the game became more popular among the traders, soldiers and sailors. This helped in spreading of the game in other parts of the world as well. Soon different countries started going to Europe and South America for this game. After gaining so much popularity, FIFA (Federation of International Football Association) was formed in 1904.

From 1930 onwards, different leagues of football started to function in different countries. Finally, in Uruguay the first world cup by FIFA was organized. This game is now becoming popular and almost every country in this world is progressing in this game.

Rules of soccer and how is it played

The rules of soccer basically includes rules on the use of hands, throw-ins, corner and goal kicks, fouls of the game, free kicks, penalty kicks, touch rule and the offside positions. Earlier the rules for rugby, handball and soccer were very similar. In soccer the players are not allowed to handle the ball.

Sometimes even the goalkeepers cannot use their hands. Making it easier, if the goalkeeper gets the ball from his team itself they are not allowed to take the pass. They can only kick the ball from their feet. If he does not do that it will be called as an indirect kick. 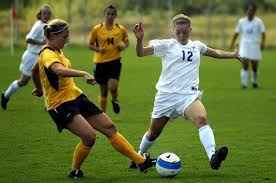 When the ball leaves the field by crossing the sideline it is referred as throw-ins. According to the throw-in rule a player has to put his both feet on the ground and use both his hands in order to throw the ball. Foul can be called in the game if a player kicks, hits, jumps, pushes or holds a player from the opponent team.

The goal can be kicked anywhere from inside the box of goal area. No player is allowed to touch the ball until the ball leaves the area which is known as penalty area. If any players touches it before then the kick is given. The corner kick takes place from the corner near to which the ball had left.

A player is not allowed to touch the ball two times. These rules are followed in most of the games. They are not allowed to throw the ball at the first time and throw it. Players cannot remain in the offside while there is a throw-in, goal kick and corner kick.

Difference between soccer and football

Many people call football with an alternative name of soccer. According to some both the games are same. But for some they are two different games. In some ways both the games are similar but they have differences as well. For many countries people consider football as the same thing. For some football is like the game of rugby but in some places in soccer only the feet’s are used to kick the ball.

Most of the countries have their own ideas and perception on football and soccer. Actually, many sports in which feet is used along with the ball, all of them are given the name as football. Under this there are many categories and soccer is one of them.

In most of these categories the balls used to play the game are round in shape but in soccer it is mostly sphere. In soccer there is no pause like how the players pause in a football match. Thus, the difference and similarities and between these two is very difficult depending on where a person resides because all of them understand these games in a different way.

How has the game of soccer changed from before?

The game of soccer has changed a lot from the time it was first played. There have many been new rules formed for the game so that there is no cheating and the match is played in a fair way. Earlier when people used to play this game there was more violence than the actual game.

Today, there is no existence of such violence compared to before. People became violent while playing the game because there were no strict rules for the game. Only after a few years the rules were formed and the game turned out be less violent.

There were restrictions put on which body parts can be used to play this game. There have been changes in the offside rule, tackling the ball, penalty kicks, and the format of the game and eligibility of a person to join the team. Later, different kicks were introduced in the game and the work of the referee was increased and changed. There have been many changes in the ball used in this game from before.

The balls come in variety and the teams have many options on which ball to use. The shoes which players used while playing has also experienced a few changes. Today, the game of soccer has become very famous and most of the schools and colleges have their own soccer teams.

They teach and play the game in a professional manner. This shows that they are promoting the growth of soccer everywhere and even among the children. When they start learning from a young age, later they have chances to join the big teams to represent different countries during Olympics or World Cup.