Which is the smallest waterfall in India?

When one is traversing through the border regions of Bihar and Jharkhand, they can find the picturesque Kakolat hill, from where rises the scenic Kakolat falls. 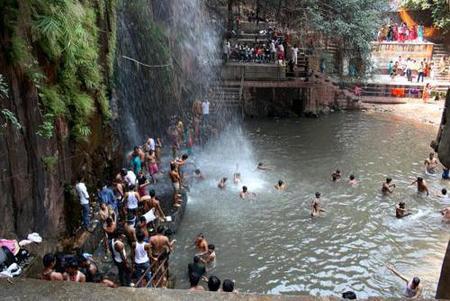 The Kakolat hill is just around 33 kilometers away from the region of Nawada in Bihar. The Nawada district is situated in the Magadha region of Bihar. The Magadha region, as we know has lots of historical importance as it was ruled by many prominent rulers in the past.

The region of Kakolat is very pleasant and remains densely cold for most parts of the year. Tourists like to visit his place in summers when the biting cold becomes a little less. The area boasts of thick forest cover along with thick spread of flora and fauna in its limits.

The Kakolat hill region is now gathering tourists from all over India, given its natural background and the ability for tourists to reach the place. The region of Nawada is well-connected from other districts of Bihar and Kakolat is just 33 kilometres away from there.

People who visit this place during summer usually indulge in summer adventures and water sports. Water activities such as swimming, river rafting, diving etc. are popular among tourists that arrive in summer.

All these water activities, along with safe boat rides are offered under the vigilance of security personnel who is present in the area most of the times.

There were reports earlier of the arrival of flash floods in the region near the waterfall due to which many people were left stranded, and they had to be rescued with great help and support.

Hence, the deputation of security personnel in these areas is mandatory to look into the safety of human lives. People should also wary from getting into the water as they should realize the importance of their lives rather than just jump into the water for fun.

The region of Kakolat is also famous for its simple trade fairs organized during the period of Sankranti. One cannot be too sure whether this has been the practise since the time of the kings and queens rule.

But it can be certainly noted that mini fairs such as this could be a reason for showcasing excellent handiworks of the people living in this part of the country.

Trade fairs provide an opportunity to people to bring out the talents in them. Multitalented villagers exhibit their skills and if it’s the season of tourists then they definitely have a big bargain. Little children are mostly happy when it comes to fairs organized in their villages.

They get a chance to play around in amusements, eat their favorite snacks and hang out with their friends. Hence, the trade fair is a very important one on Kakolat and people from neighboring villages and tourists visit this compulsorily.

What steps is the BSTDC taking to improve tourist facilities at Kakolat waterfall?

Of late, the Bihar State Tourism Development Corporation(BSTDC) has woken up to improve the tourist facilities at Kakolat. They have taken into account the huge tourist inflow into the place.

People from neighboring villages, also from other states of Bengal and Jharkhand are making a bee line to visit the Kakolat region and view the waterfall and hence every step has been taken to improve facilities at the region.

The main problem is with the accessibility of roads as they are not well maintained and are in a very bad shape. Roads are full of mud and stones are they are not properly tarred.

Local villagers tend to spoil the beauty of the area by dirtying the local areas and not taking care of the region properly. The authorities responsible are also not keen on keeping the roads and surrounding regions of the village in good shape.

The pathway leading to the waterfall is in such a bad shape that it can be hardly accessed. Removing age-old staircases and installing new, strong and sturdy ones in their place have been started.

Iron staircases with good durability have been installed in the place and it is made tourist friendly.

Other significance of the region of Kakolat and its surrounding areas

The Kakolat region, as already mentioned, belongs to the Magadha province of yesteryear history. Therefore, it has many mentions in spiritual and religious books.

The Magadha dynasty was one of the leading and prominent dynasties of the world. Lot of authors has greatly written about this place. The place is very close to other prominent places such as Gaya and Nalanda. Nalanda is a significant place due to its educational institutions.

To turn the place into a good tourist attraction and accommodate tourist coming into the area, the BSTDC has opened many new cafeterias in and around the waterfall region. Signboards have been placed and people are warned against getting deep into the waters as they could risk their lives.

Also, information centers for tourists as well as life guards and other protective and life saving measures are taken to turn the area into a safe zone for tourists.

New measures have been taken to build good restaurants and guest houses to provide staying facilities to the visitors. A tour package including the Kakolat falls is definitely on the cards for BSTDC, and it is taking proper planning and implementation steps in the right direction.