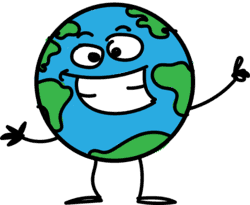 Our planet Earth is a part of the Solar System with the Sun (A star) present at the centre and 8 planets including the Earth revolving around it. The Earth is third in its position to revolve around the Sun with other plants like Venus on the second position that is before the Earth and Mars on the fourth position that is after the Earth.

The origin of Earth is a very huge concept to understand but, in a few words, it can be said that the Earth was came into existence from a condensed form of a cloud of gases. This all happened 4.7 billion years ago.

The Earth has one natural Satellite called as the Moon. This Moon revolves around the Earth in its own imaginary Axis and is very small compared to that of the size of Earth.

The Earth completes one rotation in 23 hours 56 minutes. The Earth rotates from left to right or from west to east direction.  The rotation of the Earth is responsible for the changes in weather such as warming up during daytime and cooling down at night.

Revolution is a phenomenon which is responsible for the different seasons which are observed on the Earth, for example, the major seasons like the Winter and the Summer Seasons.

When the earth is close to Sun during its revolution, it is called as perihelion which results in greater intensity of solar radiation on the earth surface.

When the earth is farthest to the Sun during its revolution, it is called as aphelion which result in lesser intensity of solar radiation being received at the earth surface.

The Earth is the only planet so far which is known to have life on it and therefore, has a very complex atmosphere.

This Magma is in a liquid or molten state consists of lava, ash, gases which consists of Sulphur, etc. and is always moving as it generates gases which are under very high pressure.

The mantle (2840 km in thickness) is present around the core and the magma, and it has a slightly colder temperature in comparison to the Core. The mantle has the temperature in the range 3000 °C to 1300 °C.

The magma which is always flowing if or when comes to a stop, it bursts out of the earth’s crust due to the high amount of pressure generated by the gases present in the magma. This usually occurs in that part of the crust which is slightly weak or thin compared to the surrounding land therefore, easily penetrable.

This bursting of the magma from the cracked crust is known as a Volcano which is very dangerous due to the amount of lava is throws out of the Earth and the deadly gases. A volcano can give rise to an Earthquake and Tsunamis (if the volcano has erupted in an ocean thus, creating huge waves).

This entire mantle is then covered by the Earth’s crust which is 60 km in thickness. The Earth’s Crust is known as Lithosphere and means that it consists of a lot of rocks which may be characteristic in their features and composition.

The rocks are majorly classified into 2 types; Igneous Rocks and the Sedimentary Rocks which then further due to the weathering phenomenon get converted into Metamorphic Rocks.

There are different minerals which are present in the crust which are responsible for the formation of rocks. Minerals can be either metallic or non-metallic. Some common and most abundant minerals are silicates, carbonates, chlorides, sulphates, etc.

Above the Earth’s Crust is an invisible covering known as the Atmosphere. This is another covering around the Earth which protects the life on the Earth from the Sun rays, different gases and substances present in the space.

The Earth’s surface is very complex as it is made up of the crust which is uneven in the form of plains, plateaus, mountains, oceans, etc. The formation and the physiology of the mountains is very different from that of the plateaus and plains.

The movement of the Earth’s Crust to form mountains is known as the horizontal movement which is caused due to the compression and tension.

When there are two horizontal forces which act on a common point from opposite directions, it gives rise to a fold which is known as a folding or faulting mountain. For example, the Himalayas and the Rocky mountain ranges.

There is another movement called as a vertical movement which gives rise to a slightly elevated land compared to that of the surrounding landmass and is therefore, called as a plateau. This type of movement is called as Continent Building movement as it is slower than the horizontal movement.

The 29 % of the land is divided into 7 continents which are Africa, North America, South America, Asia, Australia, Antarctica and Europe; and therefore, is spread all over the planet and is not just a single big mass of land.

During the early stages of Evolution, there was a single landmass known as Pangaea. This Pangaea then underwent a gradual drifting known as the Continental Drift and then broke down into different landmasses which are today’s continents with minor changes.

The 70 % of the water which is found on the Earth is also divided into 5 major oceans commonly known as the Arctic, Antarctic, Indian, Atlantic and Pacific Ocean.

There are various other factors which are responsible for the weathering and climatic changes observed on the Earth along with the variations in every theory which explain the origin of the Earth and the evolution of Life on this Planet.