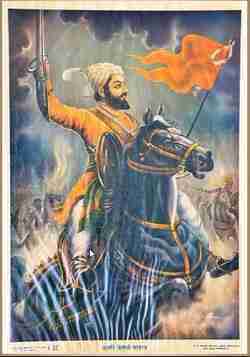 Shivaji Bhonsle (February 19, 1627/1630 – April 3, 1680), who was known as Chhatrapati Shivaji, set up the Maratha Empire in western India and challenged the Mughal Empire.

Shivaji’s father, Shahaji Bhonsle, was a spokesman and participated in the war against the Mughals. Shahaji played a vital role in strengthening the soldiers when Shah Jahan invaded the Nizam Shah.

Shivaji and Jijabai were born in the Shivneri Fort near Junnar town in Pune district on February 19, 1630. Jijabai was born to Shivaji by worshiping the goddess of Bhavani (Parvati).

Shahaji frequently changed his credibility between Nizam Shahi of Ahmednagar, Bijapur and Mughal Adilshahh, but always kept his Jagir with Pune and his small army.

Shahaji went to Bangalore Jagir with some of his principal followers to teach Jagir’s affairs to his wife and to teach political affairs to younger Shivaji.

Shivaji’s mother taught him that she would love her on the land of her birth and the love of the people.

From the time of childhood, the Indian Ramayana stories have made bold characteristics. Practice tolerance and respect for women is learned by his mother.

He studied thoroughly with his father’s defeats and in the course of time Shivaji worked in the war strategy. Shivaji started his strategies aimed at establishing the Maratha Empire.

Shivaji was also the foremost among Indian kings in the rule of administration, not only in warfare. The cabinet, the foreign policy, the establishment of a powerful spy system.

For the sake of the people he followed the principle of the ruler and did not spend any personal luxuries.

Despite the countless battles in the long period, never cleansed the sacred sites. He helped the women and the infants, and also who were not able to do war in the defeated enemy kingdom.

Once the Shivaji army commander defeated a small Muslim king, he brought his Daughter-in-law and brought her before Shivaji.

Shivaji sent her to the state with gifts and respected her as Mother, and says with her that even my mother was also pretty like you.

Shivaji is a secular ruler. Shivaji is compatible with all religions and is well-versed in all religions. Despite his many revolts against Muslims, they were respected by his rule.

Unselfishly serving the people, dedication to the work that he is doing, and the blameless personality is an ideal for his followers and people.

These characteristics have made Shivaji great, despite the fact that in India has been a great king.

The military system that Shivaji established was remains until the end of the Maratha Empire. The Guerilla war policy began with Shivaji.

The special hobby of Shivaji is to find new weapons and make battles with them. A strong navy force and cavalry was established. Eight months farmers who grow crops will also shows Shivaji’s policies to learn combat skills for four months. Not only the soldiers, but all the factions in the community were preserving the castle.

By the time of his death, 300 forts were controlled under Shivaji. Shivaji has gained world reputation in constructing vulnerable forts with high technical values on the hills.

These 300 castles were built between 1200 km to Nasik and Jinggi (near Madras).

Shivaji is a devotee of Bhavani. Shivaji sees all the religions in his empire equal. Not only the temples, but many mosques. Thousands of Muslims are in Shivaji army. Many Muslims held high positions.

Shivaji has the two generals – Daulat Khan and Siddi. Shivaji’s one of the protectors and bodyguard was Madani Mehtar who helped to save Shivaji from Agra.

At the age of 17 Shivaji fought the first battle and conquered the Torna Fort of the Bijapur Empire. In the next three years, he took possession of the Rajgad Fort and occupied the whole of Pune.

Then Shivaji sent two armies to catch Shambhaji, who was brother of Shivaji in Bangalore, and both the brothers have performed well in the war, and they got their father released.

Then Adil Shah sent Afzal khan who was a terrible warrior sent to war on Shivaji.

The main wars in Shivaji period were Battles with sultans, Mughals. And also battle of Pratapgarh, battle of Kolhapur, battle of Pavan Khind, Agra war, and Surat war.

Shivaji was awarded the title ‘Chatrapati’ as the Chief of the Kshatriyas. After some period of time, Shivaji attacked the southern states Vellore and Ginghi with a force of 50,000.

Chhatrapati Shivaji, who set up the Maratha Empire, was an ideologue of Hindu kings for 27 years and had suffered severe fever for three weeks and died in Raigad Fort on 3 April 1680.