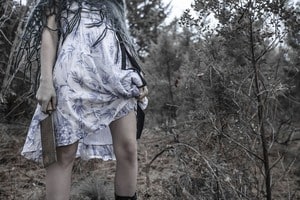 What comes to your mind when you hear the words “serial killers”? Someone who kills or murders people seriously? Or someone who continuously murders another person secretly without letting anyone? Or the one who loves to take the life of others and slaughters them? Or the person who kills others to satisfy their wants or for their own emotions? Well all these thoughts summarize who serial killers actually are.

They will be running helter skelter so that they can leave the place as soon as they can. Sometimes people even imagine a lot about serial killers. Even when children hear the word serial killer or they hear a story about or watch a movie relating to that, they start asking various questions to their elders.

Sometimes their questions may seem to us idiotic and just wasting time ones. But if we silently think about those questions, we will really lose our senses. No matter the children ask such questions, sometimes even those questions are the ones on which a person ponder on.

Even when the adults watch news about serial killers or any movie on serial killers, one part of their brain and heart gets scared. They really start thinking about it.

Some of the Hollywood serial killer movies I have watched are Peeping Tom, I Saw the Devil, Zodiac, Red Dragon, Frenzy and many others whose names I do not remember. In the Bollywood section, the serial killer movies I have watched are Murder 2, Ek Villain, Dushman, Talaash, Detective Byomkesh Bakshy and many more. Out of these I liked Ek Villain and Detective Byomkesh Bakshy.

Ek Villain was released in 2014 and was directed by Mohit Suri. In the movie Ek Villain there is a hero, heroine and a villain. This movie tells us about a villain’s love story. In this movie, the villain is played by Sidharth Malhotra. In the starting of the movie we see that he is villain and he is working for a politician.

The movie takes a turn when he meets the heroine of the movie, i.e., Shraddha Kapoor. He falls in love with her and he becomes a good and new person by her love and care for him.

But there is another turn in the movie by Shraddha is murdered by someone. This makes Sidharth to become a villain again to take the revenge from the murderer.

Detective Byomkesh Bakshy was released in 2015 and was directed by Dibakar Banerjee. The movie is based on a fictional story.

The actual story was written by Sharadindu Bandyopadhyay. Sushant Singh Rajput is the main actor in this movie. In the movie after Sushant finished his college, he puts himself into trouble against the master of crimes.

He was the mastermind. When Byomkesh Is hired to solve a case, he ultimately falls into the trap made by the mastermind when he is solving the case.

Serial Killers through the eyes of my life

I have been scared and curious about serial killers from my childhood itself. Till today thinking about serial killer still haunts me. When I was small, every weekend I used to go to my cousins place to meet them. My entire family used to come along with me. My cousins had a big courtyard.

Beside the courtyard on the left, the brick boundary of their neighbour was broken. In that house one couple used to stay. They did not have any children. It is said that the man used to sit on their house terrace and stare at the kids from the terrace. He always had a sharp knife in his hands.

Whenever I used to go there, I would ask my cousins why the man always had knife in his hands? They told me that the man always stares at the children, picks them when there is no elder around kills them.

This was not any new news for them. Most of the neighbours around them knew about it. But no one could take any actions against him because there was no proof to complain about him.

One day we were playing with our bowl in the courtyard. No one was there in the house except the children. All the elders had gone to a nearby mall for shopping. Suddenly while playing with the ball, it went to that couple’s house. The man was sitting on the terrace that time.

He saw that our ball had reached to his house. He asked us to come and take the ball. We were so scared that we did not let our eyes meet his eyes. We were shivering in fear of him. Slowly, he was coming towards us. We did not know what to do.

We immediately ran inside the house. Seeing us run, the man also started running towards us in full speed. We managed to enter the house, locked the entire house and hid in one room. The man banged the gate for like half an hour. After that he went and we got a sigh of relief.

After that we never played outside the house. Soon, our family members came and we told them whatever happened. They just prayed that all of us managed to save our lives. After that day we stopped going to their house because of that incident. So, they started coming to our house.

I had never gone from that shortcut. I would always take the other way to go their house. One day I needed to visit them in emergency. So, I asked my parents whether it was safe to take that shortcut way. They told me not to worry and I could take that way.

Nothing would happen to me. I was relieved to this. So, I went through that way. Seeing that house, my heart beat increased. It was beating so loud that I could literally hear the sound without placing my hand on the chest. I was taking small steps and walking through that way.

I saw very careful while walking. I saw everywhere if anyone was there or not. I saw no one was there and the house was locked. I just managed to cross the way. Suddenly from the back window, I saw someone with a knife in the hand. Immediately the hand with that knife came outside the window and almost reached my neck.

Only for a few centimeters it did not reach my neck. I was shocked and got very scared. I started breathing heavily and was sweating a lot. I did not know what to do. Nothing was running in my head. My mind went completely blank. I did not know what would happen to me.

But suddenly some spirit came inside me and I run from there to my friend’s house. I was continuously ringing the bell and was shouting at them to open the door. They looked at me and asked me what was wrong with me. I told them everything what I saw few minutes back.

They asked me to calm down. I finished my work with them and went back home. I informed my parents about what happened with me. They told me they forgot to tell me about that house because they thought that person had left the place and went.

But he was back again. They told me that whoever passed from that way he would kill them with that knife. I was so frightened. After that incident I never took that way and wished that I may never face such things again.