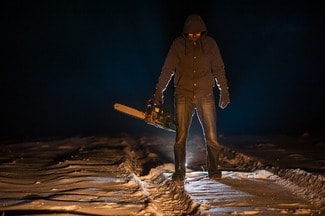 It was a dark, gloomy and silent night, yet amongst the silence, the hustle of the leaves from across the forest echoed. Every now and then, one could hear the cry of a raucous peacock which silently faded away into the dark night.

The forest, dark and dangerous, was a home to the wild animals until it gave shelter to some dead claimed-to-be “smartest creations of the world.”The chase had already begun.

The agile movement across the city, the clever presentation of her wit, the revised strategies; they were all restricted in a three- walled room and an iron barred gate when the “Master Mind” serpentined through the No-Entry Zone and tried to reside one more. The forest again hushed into silence, the chase was over. The “Serial Killer” was caught.

Fear, terror, recognition and an endless streak of murders- these are just some of the very “traits” you would consider in a serial killer. Serial killing is indeed a race, where a single contender hunts down the death of others.

Ignorance of the consequences, the desire and the thirst for blood is what often drives one into this blood smeared expedition. Yet, so is this battle, that one who tries to champion this realm stays unrevealed. The mask of a common human is what helps to prepare this façade to trap people.

The killer might be the person with a grim face and a scar running down from his or her forehead to the cheeks, continuously noticed over the week in the colony. It might be the girl in the hoodie who ends up in the evenings across the street. It might even be the business tycoon, much respected by all.

The identity goes hidden and what really calls for us to seek is the factor that drives people into this world of crime.  The world is full of incidents, tragedies and happenings. Just like every title has a story line, every tale has a puzzle to be solved. Every serial killer is a writer of a story as well as has been a part of one.

Stories related to their life, their fears, regrets and wishes are what that leads them to write a “saga” with blood-spelt letters. The horrors of their past confide them to look for an opportunity to over-shadow the bright days of a horrifying memory.

The 21st century has witnessed a different materialistic outlook, a monopoly. With varying economies and different strategic surviving methods, some people vision this queue of “maintaining streaks” as an income generator. The rational thought process is pushed back and the curiosity to multiply income gains an upper hand.

Hoarding this “materialistic asset” for one’s own needs, or rather wishes, is the prime concern, and death seems to be too small a price to be paid. Wouldn’t one grab the opportunity that would turn one’s life upside down? Wouldn’t that want for recognition convince one’s mentality? Similar is the condition of a serial killer.

They are all common people living their daily lives waiting for that one opportunity to strike, rise and shine. The entire empire seems to be their stage then. All they wait for is recognition and this madness influences them to such extremes that there seems no turning back.

The smartest creation of the world has been considered so because of their ability to think and to rationalize decisions. The entire human body works under the tiny little compass above but what if the compass no longer directs efficiently?

What if the only decision it makes is “murder” and the only thought it ponders over is the most efficient way of executing “serial kills?” Mental disorder has always been considered as a pathway to people heading towards serial killing. The only other exciting thing and an alternative to the happiness of these people with such illness is this rapid dash towards creating records, criminal records.

An eye for an eye ends up making the whole world blind. True yet neglected, revenge is the attribute of the weak. People with weak outlook towards the wrong done to them, seek for revenge. But is killing or specifically “serial killing” a revenge seeking method?

Considering the fact, that a person has gone through unjust actions, should one really be excused for this amalgamation of committing crime and losing one’s humanity? Perhaps, the want to seek revenge compels them to plan an action, an action to fight the unjust for proving one to be just by doing something unjust.

We are all social beings, wanting to be accepted, wanting to live under the canopy of “society” but then there are some, whose wants are never fulfilled. They are not accepted in the society for numerous reasons. These rejections give rise to hatred and feelings leading them to believe that they are unwanted.

People undergoing such conditions start formulating a plan to eradicate those who refuse to accept some in the “society.” Gradually, slowly and steadily, they tend to become professionals in the field of “serial killing.”

Numerous rules and regulations have been established against such acts, such crimes, but have we ever considered the fact that it’s the crime we have to curb and not the criminal. Some perform these acts to seek revenge, some because of their hideous past, some because of economical issues and some because of hatred and rejections.

There are enormous possibilities that might drive people into this act of cruelty and this event of driving people to death but instead of imprisoning them for life or granting death sentences, we have to understand them and help them escape this downfall.

They need a road to walk, a hand to hold and a guide to direct them so that they can lead a better life by realizing and correcting their wrong doings, they need a way to turn their lives upside down and better their future because serial killing is an art and not everyone can become an artist unless forced to.