It is the power of one to believe in oneself that he or she can achieve what one has ventured to do. Just like any other activity self confidence also has its pros and cons. it can build character but can sometimes destroy it as well. Too much confidence in oneself is often described as over confidence. Self confidence is a self evil.

Confidence is of two types

1) The positive type of confidence.

2) The negative type of confidence.

This is the type of confidence that works in our favor. Confidence is definitely needed in one’s life. Otherwise a person will face failure. He won’t have self-dependency. He will fail in every venture he undertakes. But a bit of boost of confidence can gear up his adrenaline. And move him on the path of success. History has been the eyewitness of many such stories from where it can be proved that self-confidence has helped to move small stones to big mountains.

Coming to the story of napoleon, there is a famous story that goes about the napoleon crossing The Alps. When Napoleon and an army of sixty thousand soldiers came to the Alps they saw the towering Alps rise above them. Doubts started rising in their minds, “is it possible to cross the Alps?”

Maximum of them thought it’s impossible. But napoleon commanded “I don’t want to listen anymore”, “forward to Italy”. A long line of soldiers and horses and canons marched through twenty miles. 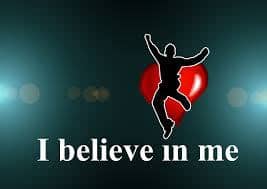 There came a point in the journey where there was a steep slope where there was no way to go forward in any way as there were no roads. But behind them came a booming voice resounded behind them “charge”, and every man did his best and altogether they crossed the Alps, and within just four days they were marching on the plains of Italy. Napoleon said ” The man who made up his mind to win will never say “Impossible”.

Such is the power of self-confidence. It can move mountains and make way over the oceans. People with good self confidence have been great leaders. Be it Karl Marx, Alexander the conqueror, Julius ceaser or the emperor Akbar.

In each and every case we see that each of them had ample confidence in himself and they didn’t remain satisfied with just that. They strived to make their works better and correct the flaws that they have. This brought them success. Another story of self confidence that has come into limelight is the story of dasrath majhi

Yes, he is also known as the “Mountain Man”., was a poor laborer in the gehlaur village in the district of Gaya in Bihar. He carved a path 110-meter-long and 9.1-meter-wide and 7.6-meter-deep through the hills of gehlaur with only a hammer and a chisel.

The incident started when his wife falguni devi , while crossing the gehlour hills to bring his lunch, slipped and had seriously hurt herself that eventually led to her death. Dasrath Majhi was deeply pained by this incident on that very moment he decided to cut road through that hill single -handedly so that people of that village can get better medical attention and they don’t have to die due to lack of means of access.

He completed the work in 22 years (1960 &1983). This path reduced the distance between the Atri and Wazirganj sectors of the Gaya district from 55 km to 15 km. He sadly commented,” When I started hammering the hill, people called me a lunatic but that steeled my resolve.” Dasrath Majhi’s self-confidence was not moved even with people discouraging him.

Although he was no big leader but for the good that he did his name will be clearly etched in the book of marvels forever.

But not all are the successful cases of self-confidence. There are also cases where too much of self-confidence ruined the plans. Too much of confidence makes us think that we can undertake anything and that is where the problem lies. We don’t prepare ourselves well for the challenge. We think we can do it. We don’t rehearse ourselves to get ourselves ready for the showdown. Hence, we have to face failure.

Heard of the famous story of the rabbit and the turtle? The rabbit was over confident about his success from the beginning of the race. It mocked the turtle for it slow and slack approach. But the rabbit for his over confidence goes to a tree shade and dozes off to sleep thinking that he is far ahead in the race. While in the meantime the turtle slowly and steadily wins the race.

This is not just a childhood story. It gives us rich moral teachings of life

Another famous story that goes is the story of the frog in the well. The frog in well was so over confident about his knowledge that he did not hear any word of the frog coming from the sea. He mocked and laughed at the stories the frog from the sea told him about.

He disbelieved the fact that there can be another world much more than his well. He then told the other frog to leave his home. He did not get to know that the world is much bigger than what he knows. He remained in the darkness of illiteracy.

Hence, we get to set that confidence is good but over confidence is not. Therefore, we have to maintain a balance in this equation. Any tilting of the scales to any one side way more than what is needed will affect us only at the end and won’t give us chance to regret.