Essay on Secularism for Children & Students 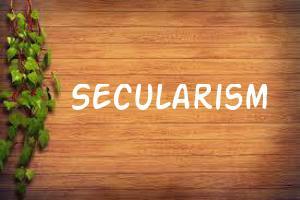 Secularism means the secularity of the religion not connected to the government. Religion is the key word for secularism. In a state like India, there are various religions in different parts of the country. It is a very difficult question to answer that if secularism should come into action or not.

Countries like Pakistan follow secularism there. There are states of particular religion. India and United states does not apply this. Thy have just one government that controls the state. When secularism will come into play then priests would become the rulers. Religion creates differences between the people.

When we look back into the history, we would see the destructions made on the name of religion. Talking about India itself, the major cause of partition was religion. Religious difference created chaos. The British made use of this religion to create dispute.

A religion is to combine people. It is to unite the individuals. It was a time when states were not assigned to different religions. It was the time when Hindus and Muslims lived. There was no sense of being different from other in terms of their religion. Such was the beauty of India at that pint of time.

If British were not able to make differences at the time of unity, then what would happen at the present scenario. It is a major concern. We need to think about it.

They have emotions and sentiments attached to it. Nobody would ever want to stay away from their religious practices. It is against their self. In fact religion is something that binds people of their community. This is the power of religion. But as religion is connected to the emotions, if it is disturbed people would show their rage.

Like how we are free to listen to music of our choice. Buy clothes of our choice. Make decisions on our own. Similarly religion is very delicate thing to be altered. It should not be changed. Things that are close to people’s emotion are dangerous to play with. Religion is something with which we are born.

It is there with us since the very beginning of our lives. Such is the importance of religion in an individual’s life. It is sacrosanct. It is too pious to be altered.

In countries like Pakistan where state religion is followed becomes difficult for the people. They are not free. They can- not make their choice. They can -not protest against what they don’t like. They have to follow the instructions and norms.

They can- not refuse to be a part of it. It becomes burden for them. The religion loses its essence at that point of time. They are not free. They are bounded and forced to live in such a way. This is the worst thing to happen. Religion is some -thing people are afraid of.

They are afraid of the consequences they might have to face. They are worried about the punishments they would get if they don’t follow the religion. Religion is like emotion. One feels connected. What is the meaning of such religion that brings fear to the mind. That is not religion that we talk about.

In Pakistan every -one has to follow the same religion. They can-not refuse. They don’t have the freedom to go for other religion. Things are accepted from within. It can never be imposed of anybody. When it is about religion, it should never be a forceful act. People should be free in their approach.

The one born in Bengali family can-not earn the same feeling of attachment for a Punjabi culture. They both are very different in their conduct. The one belonging to Bengali culture is deeply attached to it and can never develop same attachment with the Punjabi culture. Each and every religion should be respected. They should be given their space. Their freedom should not be violated.

It is a way to control people and generate the fear of religion into their minds. To be secular would bring unity among the people. If people are free then they would be content and happy.  This would help to shape the society in a better way. Every individual will have his/her freedom.