One such wonderful creation of God is tiger. Tiger is a very ferocious animal. It is a delight to watch. This animal is also termed as the national animal of India. It is of two types. First category is with orange and black strips. The other one is with white and black strip.

Both the categories of tiger are beautiful. It feels great to watch them. They are the strongest animals of the world. They live on land. They live in the dark, dense forest. They are nocturnal. Nocturnal is, they feed at night. They do their hunting at night.

They are carnivorous animals. They feed on animals for their food. They are great hunters. It becomes very hard for the animals to escape from them. They have four legs and a magnificent look. They are great runners. They run at a great speed.

This is one of the reasons why animals cannot escape from tigers. They hunt even the bigger animals. Elephants are known to be the biggest animal. The tigers are not even scared of them. They can attack them too. They make their prey the deer. It is the most common and easiest prey for them. They attack buffaloes and many other animals.

Every animal is unique. All the animals have their own importance. They are a part of eco-system. Their creation must be because of any reason. The sad part is, many animals are on the verge of extinction. They are depleting day by day. They are growing lesser in number. 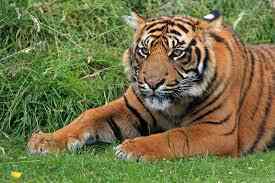 The numbers of tigers left in India are too less. The number has come to such extent that it can be counted. We are on the verge of losing the most amazing creature. Not only in India but also in other countries the number has depleted to a great extent. This is a call of major concern.

There are number of causes for their depletion. One major cause is deforestation. Tiger lives in the forest. It is their dwelling place. They are habituated to live there. They are familiar to that kind of environment. We, the humans are cutting down the trees.

The cutting down is at greater speed. The trees are used for various purposes. The wood is used for making papers. It is used in the furniture. It has various usage. It is due to this very reason that they are losing their ground. They move out on the roads. They have lost their natural habitat. When they move out on the road or in the nearby villages, people get scared.

They to protect themselves harm them. They tend to kill them. It is very saddening. They are getting killed for no reason. It is natural for them to go in the search of place. They too need shelter. They have their life. God has created them and their place to live too.

It is the demands of humans because of which these animals are suffering. Their depleting number has become the matter of great concern. It is not only the case of India but also throughout the world. There are various programs introduced to save tigers.

The focus is now on the preservation of remaining tigers. What is lost can -not be regained. Similarly, the number of tigers lost can-not come back. There are various ways of protecting them. One such method is to preserve them in the zoo. The zoological parks. There are kept under the government system. People can go there to see the animals. This is the one way to preserve them.

The other method is by declaring particular part of forest as reserved. The animals are not taken to the zoo. They are preserved on their own land. All the other practices are restricted there. There is no hunting, no cutting down of forest and so many other things.

The planting of trees not only preserves their land but also the environment. It is good for the ecosystem. It is beneficial in both the sense. They are the unique creation. They need to be protected. The coming generation should have the pleasure of watching them. They are like the treasures. Everybody should be made aware about this burning issue. It can be spread in the form of pamphlets and handouts. It is our responsibility to save them.