Sarojini Naidu – The Nightingale of India

Sarojini Naidu was a notable philanthropist, internationally acclaimed poetess, a staunch supporter of freedom, political activist and a paramount orator. She devoted her life to the cause of obtaining freedom from the shackles of British rule and was an inspiration to the women, a formidable leader of them all.

Her poems are vehemently rich in emotions and full of ardent imagery and owing to the melodious voice she herself possessed, she was often adorned with titles such as ‘Cuckoo’, ‘Bharat Kokila’ and ‘The Nightingale of India’.

She began writing poems at the age of 10 and by 12, she had written ‘Lady of the Lake’ which was 1300 lines long, in merely six days. She was well versed in five languages namely English, Hindi, Urdu, Telugu and Bengali but she chiefly wrote in English.

Seeing that his child was indeed gifted, Sarojini’s father sent him to Madras in order for her to complete her matriculation. She flared with a distinction in her examinations and ended up getting a lot of appreciation for the same.

Sarojini then, took a long break from her studies but rather devoted herself to writing poems and drama. In 1895, her one such play in Persian, Maher Munee grabbed the Nizam’s eyes and she was awarded a scholarship and a golden opportunity to study at King’s college, London and later at Girton College, Cambridge.

Her studies abroad affected her deeply for not only it honed her literary skills as a poet rather also imbibed in her the feelings of Universal brotherhood. She befriended authors like Arthur Simon and Edmond Gausse who were all praises for her aboriginal work.

They inspired her to write on the lines on Indian plight, delight and culture and be identified as the genuine Indian poet of the Deccan rather than as a machine-made imitator of English classics.

At the age of 19, Sarojini met a physician, non-Brahmin, a South Indian, Muthyala Govindarajulu Naidu and they both fell in love.

She expressed her wish to getting married to Dr. Naidu, to which her father complied despite the fact that inter-caste marriages weren’t allowed during those times. They had a successful marriage and became proud parents of four children. 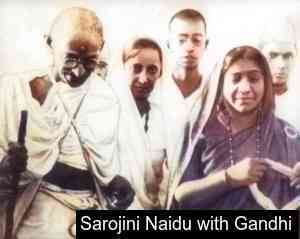 Following the partition of Bengal by Lord Curzon in 1905, which affected Sarojini Naidu deeply, she was subjected to plunge into the freedom struggle of India.

She came into contact with Gopal Krishna Gokhale who advised her to use her wit , intelligence and poetry for creating awareness about Independence among the countrymen.

Sarojini abided by the words of Gokhale and actively began participating in various movements of the Congress namely, Salt Satyagraha, Dandi March and Quit India Movement. She became the symbol of representation of a number of oppressed India women.

In 1915-18, she travelled through the meadows and pastures of the Deccan, the plateaus of Malwa, through the deserts of Rajasthan and the lush green plain regions of the North to spread her heartfelt message of nationalism and women empowerment. Her sweet voice and motivational poems left everyone inspired to stand firmly against the foreign rule.

Her contributions were so notable that during Salt Satyagraha when Gandhiji were jailed along with many prominent leaders in 1930, he passed on the duty of carrying forward the movement’s momentum to none other than Mrs. Naidu.

Her being a chieftain, gathered a flock of women and she successfully led the march of Dharasana Satyagraha forward. Mrs. Naidu shared an amical rapport with Mahatma Gandhi. She had nicknamed him, ‘Mickey Mouse’ owing to his frail and fragile physique.

In 1916, Sarojini met with Jawaharlal Nehru, together they fought for the rights of farmers of Champaran, one of the western districts of Bihar.

Those poor peasants were forced to grow Indigo in their farms, the aftermath of Indigo plantations had to be paid by them, when their land used to become devoid of its fertility after the harvest of Indigo for a period of 1-2 years.

She help set the stage for highlighting the dignity of labor, welfare of youth and emancipation of women through her delicate yet thunderous speeches.

She rolled the ball of uniting women by setting Women’s India Association (WIA) in 1917 along with Annie Besant which successfully represented the equality of women’s right in London, to present the case for women’s vote in Joint Select Committee, when freedom was being granted upon to India.

She upheld the political and social rights of women and asked for the legitimate equality. Mrs. Naidu had all the qualities of a charismatic public speaker.

She had always motivated the women to become the torch bearers of the India Freedom Struggle for it’s the womanhood, in her words, that acts as a catapult of driving the society at large towards being more responsible towards the duties and aware of one’s rights.

Mrs. Naidu, had actively participated in Quit India Movement and Civil Disobedience. Her involvement came under the scrutiny of Britishers and she despite being a woman was imposed to rigorous imprisonment. She was hence made the President of Indian National Congress(INC) in 1925, at Kanpur.

She was the first Indian Woman to take up the presidency. She stood firmly when vehemently opposing various Acts of the government for instance, the Rowlett Act, which deemed the possession of seditious documents as illegal.

This led to a fervour among the leaders of INC and Mrs. Naidu was seen opposing it vehemently as well. Mahatma Gandhi organised the non-violent Non-Cooperation Movement to oppose it and she was seen as the religious devout of the movement.

Her active participation in the movements that agitated the youth and women all the more, led to her stints in the prison. She was arrested in 1930, 1931 and 1942.

So much strong had her leadership become that during Civil Disobedience, she was arrested for 21 months. This arrest could have been longer if her health wouldn’t have deteriorated in the jail which forced the government to free her on moral grounds.

Emerging as a Leader 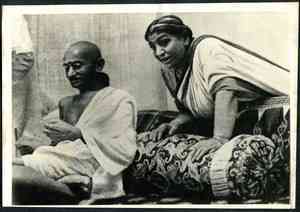 Mrs. Naidu had become the prominent face in the freedom struggle and she was imparted with certain responsibilities and duties as a flag-bearer for the quest of India’s freedom.

In 1919, she was summoned by the INC to England as a Member of All India Home Rule Deputation. She traveled to the United States and Europe far and wide, to establish the peaceful and non-violent Gandhian principles, seeking support for India’s Independence.

She had a Seer’s vision and an Angel’s voice that impressed everyone.

Aldous Huxley, an eminent British writer and philosopher after meeting Sarojini Naidu was quoted writing, “It has been our good fortune, while in Bombay, to meet Sarojini Naidu, the newly elected President of the All-India Congress and a woman who combines in the most remarkable way great intellectual power with charm, sweetness and courageous energy, a wide culture with originality, and earnestness with humour. If all politicians are like Mrs. Naidu, the country is fortunate indeed”.

She was seen as an important delegate during the Second Round Table Summit held in London in 1931 with Mahatma Gandhi, whom she shared amicable relations with. In 1929, she presided over East African Indian Congress in South Africa. Also, recognizing her selfless work during the plague epidemic in India, the British government awarded her with the title, “Kaiser-e-Hind”.

After her release from the prison, which didn’t waiver her a bit from the cause of serving humanity and of gaining freedom, she presided over the Steering Committee at the Asian Relations Conference in 1944.

Also, were significant, her exceptional contributions to the drafting of Indian Constitution during 1947-49. During the same period, she became the first woman Governor of then, United Provinces of India (Uttar Pradesh now) for her contributions in the freedom struggle. An unconventional woman herself, her works , patriotism and glory charioted the steering of women to leave their marks in  public life as well.

Mrs. Naidu breathed her last on 2nd March 1949 while still being an office-bearer. She died of heart-attack in her office premises. The building which was her residence at Nizam’s College, where Mrs. Naidu’s was the Principal has been renamed to The Golden Threshold as a mark of respect to the lady and serves an off-campus annexe.

Mrs. Naidu was known for her choice of silk clothes and jewellery but when she gave her body, mind and soul to the service of her country, she vouched to wear Khadi sarees and devoid herself of any adornments in the wake of freedom struggle. She was succeeded by her daughter, Padamaja Naidu, yet another woman at par with intelligence, who was made the Governor of Bengal in 1956.

Her literary works that are drawn upon Indian themes of delight and plight continue to remain a part and parcel of the education curriculum till date. Her most acclaimed poems, the Palanquin Bearers and The Indian Weavers are taught to pupils in high school. They opine the ideas of Indian classics into the minds of the young gleefully.