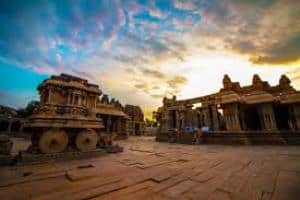 The Establishment of the Vijayanagara

This place was originally established by two brothers Harihara and Bukka. They played an important part in establishing the empire that was to be named as Vijayanagara. These two brothers were initially natives of a place called Warangal, and they were employed as minister and treasurer of the state, respectively.

They were working for the Kakatiya king named Prataparudradeva. However, in the year 1323, they had to flee the state due to the Muslim invasion. They fled to the northern side of the Tungabhadra River and worked for the Kampili.

But the Muslims at this place as well and both the brothers had to cross the Tungabhadra River and came to discover a new city which they named as “city of victory” or to be popularly known as the Vijayanagara Empire. They formed the city in the year 1336.

Since then four major and prominent dynasties have ruled and left their mark in the Vijayanagara Empire. Those four dynasties would be- The Sangama Dynasty, The Saluva Dynasty, The Tuluva Dynasty and the Aravidu Dynasty. These are in the order of their succession.

The Sangama Dynasty was founded by Harihara I and Bukka I. Although their father was captured by Muhammad bin Tughluq. He was captured and kept as a prisoner in the year 1327. The story of Sangama dynasty begins after this the successors, continued with the motives of their father and were able to establish a firm kingdom.

And from there emerges a great king Deva Raya II, who is actually to be credited for the development of the Sangama kingdom. Successor of Bukka, Harihara II, went ahead and promoted his reign. He took over the coastal areas of Andhra. He went ahead to capture the southern parts of India.

He seized areas that lied between Nellore and Kalinga, and captured places such as Addanki and Sirsailam. It won’t be incorrect to state that he managed to capture the major regions of the Krishna River. Other places that he took under his reign would be Goa, Dabhol and Chaul, which were the prominent ports of that time in India.

There was absolutely no reign which didn’t have confits among the relatives. There was a period were the successors of Harihara II fought amongst themselves as to who would be residing over the throne. The Successors were Virupaksha Raya, Bukka Raya II, and Deva Raya. The throne was finally taken over by Deva Raya. And to the good fortune of the Sangama dynasty, it was for the best.

The Sangama kingdom soon replenished after his succession. He was in charge of the vast empire Sangama. Many other successors that resided after Deva Raya, failed to prove that efficient as him. But Deva Raya II, outshone all the rulers that resided before and after, in the entire course of the Sangama reign. Under the rule of Deva Raya II, the Sangama Dynasty flourished and reached its golden times.

He extended his territory from Odisha to Malabar and from Ceylon to Gulbarga. He captured almost the major portion of the southern India and that had places Kondavidu. He was opposed by many kings and chiefs, who did not want to hand over their territory to him.

And so he fought those kings, and was able to conquer their territories. One such ruler was from Quilon, who Deva Raya II defeated and took control of the region of Kondavidu.

He even captured many major ports of India. But after Deva Raya II, his successors proved to be a complete failure in order to maintain the establishment and hence the inefficient rulers failed to carry on the Sangama flag forward. The last ruler was Virupaksha Raya II, could not do much good.

He after defeating the Berar and Bijapur Sultans captured the Raichur, a doab. As it was mentioned earlier his reign saw the huge expansion of the Sangama dynasty. His reign extended from Odisha to Malabar. He made the then king of Odisha to give back the captured territories of Vijayanagara.

Those territories include the regions of Krishna River. The ruler of Odisha was in turn forced to return the cities and this resulted in the immense power of then emerging King Deva Raya II. Krishna Deva Raya emerged as a powerful emperor of the north. But his power was not only limited to just expanding his rule.

He was also an efficient king and so people in his kingdom flourished. In one of the text his reign was described as the well and sufficient places. Many travelers from foreign came and describes the Vijayanagara Empire and the reign of Emperor Deva Raya II as a cherished place to reside in.

Deva Raya II was not only a skilled warrior ant the battle field but also an efficient administrator who respected and understood the need and importance of justice. His subjects liked that their king was just to them and actually listened to their pleas. He was extra careful when it came to the welfare of his people.  Coming to talk about the administration of Deva Raya II, he was adequately efficient and thus his subjects were treated fair.

He was an efficient warrior, an adequate administrator, a nobleman, a justice appraiser and a just man. He was also a scholar and so even appreciated and enjoyed art and culture. His period saw a different taste of literary works. His period showed and gave the literary world a new and fresh version of Telegu works. He even had scholars who were appreciated. There were 8 in total.

There were eight scholars who were also known as Astadiggajas. These were the Telegu writers. The literary work in the Deva Raya II period did not limit itself only to Telegu but also extended and welcomed the works from other languages such as Tamil, Kannada. He extended his patronage to the poets from these areas. Deva Raya II was himself a poet and was also a great scholar. He appreciated the literary work as a learned king would do.

Amuktamalyada, was the literary work of Krishna Deva Raya. And it is worth to be mentioned here. Unlike other ruler of that time Deva Raya was tolerant towards other religions, and their different religious practice, which was a tremendous step considering the fact that he was in a period that was not very welcoming toward other religions. His people were free to follow and practice any religion.

They were given the liberty to worship as per their choices. There were many other development in the Sangama Dynasty and under the Deva Raya period. The time witnessed many buildings as well. He made an irrigational tank. He built a tank that was exclusively for agriculture.

For this he had a huge tunnel dug. He made new towns as well. However as every great dynasty flourishes there comes a time where it has to end its reign. And so the golden period of the Sangama dynasty ended with the death of its greatest ruler, Sri Krishna Deva Raya.

They crushed the Sangama Dynasty in the year 1565 in Talikota. The rising Muslim powers took over the majestic kingdom.  And thus the fall of the majestic king and his breathtaking empire came to an end.