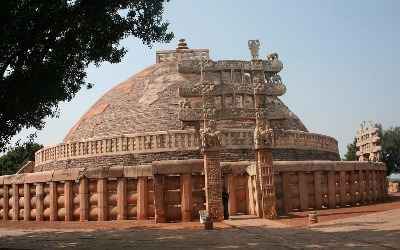 The city of Vidisha was on the trade route which connected the plains of the Ganga to The Western coast. It was also a great market place in the center of the vast Plains of Central India.

At Sanchi Airtel Hill close to Vidisha are the earliest surviving Buddhist Stupas. Halfway up the hill is a stupa containing the remains of the prominent buddhists teachers of the Maurya period. The Vedica are made around the stupa dates to around 1000 BC.

Buddhism grow rapidly while and after Lord Buddha’s time. It’s ideas and practices emerged through interaction with other traditions.

Some of these interactions to form the generation of certain secret places which were attached with small shrines. Besides these places associated with Lord Buddha’s life and stupa’s containing his relics where also worshiped.

Sanchi Stupa was built by Ashoka during the Mauryan Empire to spread the message of love and peace. It is the first built Stupas of all at Sanchi. Sanchi stupa is now a historic monument. It houses the relics of Buddha.

It is situated on a hillock. There are many other stupas in the vicinity. But maximum of them are now in dilapidated condition. Our lion emblem has been taken from the ‘Ashoka Stambha’ located near the entry of the stupa. The entry gates are aligned in the four cardinal directions.

It is made of sandstone blocks and some amount of bricks. Ashoka wanted to spread the message of love and peace far and wide. He became a follower of Buddhism. Hence he ordered the erection of such structures.

It has an ornamented gateway called the ‘Torana’. The stupa cannot be entered. You can only walk around it. It is one of the biggest landmarks of Buddhism in India. The monument is placed on so high a hill that the top of the dome can be seen even from a distance. It is still standing in the same way fighting the test of time.

The relics of budha are located in the nucleus of the hemispherical brick structure. The form has been given a round shape purposefully signifying the dust mound poured on a Buddha’s relics.

The hemispherical dome is called the ‘anda’ – This structure was built to exemplify and illustrate the heap of soil that was used to bury the lifeless body of Lord Buddha. The ‘anda’ is a solid structure but contains the relics and actual remains of Lord Buddha.

However, it is believed that different last remaining mortal relics of Lord Buddha are present in many of these Stupas inside their respective andas. The remains of lord Buddha present inside the andas have been archaeologically verified and corroborated by scientific methods.

These remains are indeed of the great Buddist scholar Siddhartha Buddha. It is however believed that a few of them might have been misplaced or stolen due to exploitation over thousands of years by the followers of Buddha.

Many of them have stolen relics because of their immense loging to be in contact with the mortal remains of their beloved teacher Buddha.

Entry gates are called the ‘toranas’ – The gateways to the stupas at sanchi are known as Torana. It is an exemplary work of art and architecture going hand in hand. These were built by the Satavahanas during 70 BC. The toranas are of a very unique nature and have an equally unique story behind their making.

It is said that those toranas were not made by order of the royal dynasty but was built from the money collectively donated by the local people including farmers, businessmen, lawyers etc. The inscriptions on those toranas were also not decided by the rulers.

The common people of the kingdom were given complete freedom to choose whatever was to be inscribed on them.

The toranas are made in accordance with a unique design concept having two pillars supporting three parallel horizontal beams. The wheel of law is carved at the top while seven incarnations of Buddha are also present around it. The inscriptions also include pictorial stories that tell us about the life and times of the common people.

The circulatory path is known as the -‘medhi’ – This is supposed to surround the anda which depics the central part of the stupa. This place is supposedly meant for circumambulation rituals.

The square railing at the top- ‘harmika’ – This is a depiction of the sacred dome and is made of various writings carved on it.

The Sanchi Stupa is a UNESCO world heritage structure. Although there is no dedicated management team that looks after the maintenance of the structure, a wing of the Archaeological Survey of India, looks after its general care.

The Ancient Monument and Archaeological Sites and Remains (AMASR) Act of 1958 and its Rules of 1959 and the Amendment and Validation Act of 2010 and the gazette notification of 1992 are responsible for providing the maintenance of this great historic site of human history and wisdom.

The maintenance and timely restoration of landscaping of the area falls under the responsibility of the Municipality of Madhya Pradesh.

Every year lots of tourists, both Indian as well as non-Indians visit the holy shrine to witness not only a divine and spiritual ambience but also to notice the exemplary work of architecture done thousands of years ago without any of the technology that is available to us today.

It was built at a time when tools were limited and rare. Skill from hit and trial and an immensely towering vision were the only assets they had.