My Role model Essay for Children and Students 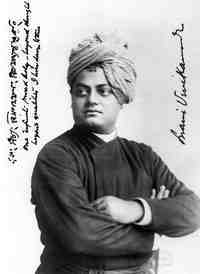 The popular conception of a role model is that of a hero as a warrior who shows great courage and conquers kingdom. Heroism does not consist in heroic deeds and acts of valor only but it also includes setting an instance for our peers to follow. And to make that instance a person has to maintain his or her life through strict discipline so that in the later days others don’t get a chance to raise fingers on his personal life.

Those people who relieve human suffering and work for the welfare of human race are not only role models but also great heroes. They are the true saviors of mankind. Speaking in this sense, Swami Vivekananda is one of the greatest heroes of India and to me the most ideal role model that I can ever follow.

Swami Vivekananda is called the Monk-Hero of India, is the magic name all over the country. Why? The following revelation that I am going to state will make this clear.

His is a name which the whole world still honours. He is one of the makers of modern India. Long years of foreign rule bled the white, the people of India were broken-spirited and most of them were sunk in ignorance and superstition. Her prestige had sunk to the lowest level abroad.

It was at this period in Indian history Vivekananda drew attention of the outsiders to India’s glorious past and showed them that her philosophy and religion could still inspire millions of people all over world. His message electrified the whole country and that was, in fact the beginning of a new life in India.

Vivekananda (or Narendranath Dutta, as he was known in his worldly life) was born in Calcutta on 12thJanuary 1863. His father was a brilliant lawyer, who, however, died suddenly and left the family very poor. Narendranath found life a hard struggle.

He, however, was constantly haunted by one question. “What is God?” nobody could satisfy him. At least he found in Ramakrishna Paramahansa a man who could answer his question. After Paramahansa’s death, he wandered all over India and was deeply moved by the distress and poverty of his country. He decided to fight them with all his strength.

Somehow, he raised funds by begging at doors and sailed abroad to America. Who knew at that time that this man will one day glorify our country’s name in the foreign soils! A man who didn’t get any financial support for his travel, had to beg to pay off his train tickets, spoke so beautifully about his nation in the foreign lands.

He addressed the Parliament of Religions at Chicago in 1893 and held the big gathering spellbound with his speeches on Indian philosophy and religion.

At the start of his speech, he addressed the masses by saying,” My brothers and sisters of Chicago” instead of telling, “Ladies and gentlemen”. This greatly moved the people attending the meet that stood up to give him a standing applause which reverberated for a long time in the walls of the Parliament.

He was already a famous man when he returned to India. He travelled from Colombo to Amoral making speeches and the whole country was stirred up. Newspapers started selling like hot cakes; people waited to hear his news.

It has been declared by the Indian government that the birth date of Swami Vivekananda’s birthday will be celebrated as National Youth Day on 12th of January since 1985, every year.

The motive of celebrating this day is to influence and inspire young generations to live a life as good as his as well as inculcate all the pious ideals into the coming generations.

At this day people all over the nation remember Swami Vivekananda and his contributions to the country. It is celebrated with great devotion and purity at headquarters of Ramakrishna Math and Ramakrishna Mission including their branch centers.

Here the monks pay homage to the creator. The one for whom they are there. Various activities like homa, meditation, mangal arti, devotional songs, religious discourses, sandhya arti, etc are performed on this day.

Swami Vivekananda during the Indian renaissance was also instrumental in the upliftment of the condition of women. He always believed that development of women must come first, then only some good can come about for the country.

He was ectremely impressed to see the condition of women in developed countries and wanted the same to happen to India too. His views on women can be implied from his following saying:

“Educate your women first and leave them to themselves; then they will tell you what reforms are necessary for them. Our right of interference is limited entirely to giving education. Women must be put in a position to solve their own problems in their own way. No one can or ought to do this for them. And our Indian women are capable of doing it as any in the world”

“The true essence of religion lies in the service of men”. He believed we are all made in the image of God. If we serve others then we are serving God in turn. Any wrong or harm done to our fellow beings is indirectly hurting god. This message of Swami Vivekananda has mostly captured my imagination.

He was also a man who greatly revered his mentor and had made the Ramakrishna Mission entirely dedicated to his teacher, mentor Shri Ramakrishna Paramahansa. We should always follow his advice and serve the suffering people. His teachings have opened up a whole new era to us.