One fine evening, I decided to go to see a movie at Cinemax with some of my best friends. We rode to the cinema hall on our cycles. When we touched the main road, we saw a car dashing at great speed. It knocked down a boy, travelling on his bike. Soon he was rolling on the road.

We hurriedly rushed to the spot. The boy was seriously injured. His face was bleeding and he was not able to move. Within a few minutes, there gathered a big crowd of onlookers. But no one was ready to take him to the hospital.

We dropped our idea of going to the movie and took the boy to a nearby hospital. Some people started beating up the car driver. After a while, a policeman also arrived at the place of the accident.  The car driver was taken to the police station. 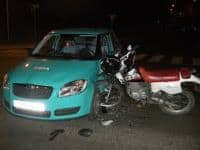 The police registered an F.I.R. and the driver was kept in the police lock-up. Luckily, the boy was declared out of danger. The doctor said that there was a minor fracture on his left leg.

He was advised rest for 20 days to recover. We thanked God for saving the life of the boy and returned home.

However our movie trip was cancelled, but at the end we feel liked we have save some one.