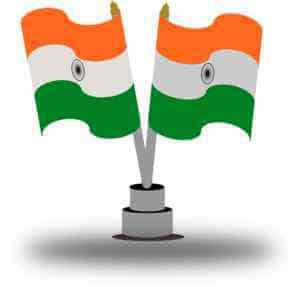 Good Morning to one and all present here. I welcome the honorary dignitaries present on stage.

A warm welcome to the honorary chief guest of the day, our school principal, the management, staff, non-teaching staff and students.

Today on 26th January 2020, we are celebrating the 71st Republic Day of our nation. Let us know the significance of celebrating republic day every year. Our country got independence from British rule on the 15th of August 1947.

It was a long struggle under the British before the country got free from their rule. Lakh of people laid down their lives in order to save the country from getting ruined in the hands of the British.

Republic day is celebrated to commemorate the day when the constitution of our country was formed.

On the 26th of January 1950, the day is etched in the pages of history because the constitution written for our nation came into force.

Our nation thus had its own republic. Dr. Rajendra Prasad was the first president of independent India. The common man is considered the ultimate force of the country.

The common man is bestowed with rights to choose his leader through an electoral vote bank process.

A very good morning to everyone assembled here. I warmly welcome our guest of honor for today, our beloved principal, the school management and staff.

I would also like to extend a very warm welcome to my dear friends who have assembled here to be part of the day’s celebrations.

The 26th of January is celebrated as the republic day of our country. It is a very significant day when the constitution of our country legally came into force. Dr. Rajendra Prasad was appointed by the government of India as the first president of the country.

Let us begin the day by going down history lane. After many long years of struggle under the British rule, our country finally attained independence on the 15th of August 1947.

Soon after that, the country started reform movements.  Rules and enactments had to be customized according to the laws of our nation and that’s when a requirement for a separate constitution for our country arose.

So, the constitution was framed in this respect and it was presented to the nation on the 26th of January, 1950.

People are the largest power holders in a democracy and they have all rights to exercise when it comes to appointing their elected representatives.

The rights and duties of citizens are laid out in the constitution of India. Nobody is above law. The government of India prepared special provisions to protect the interests of the backward communities of our country.

Reservation and other relevant factors were brought about in the constitution. The government of the country has effectively brought the constitution into force and we have been seeing progress and development in our nation in accordance with the doctrines specified under suitable provisions of the constitution.

Science and technology have seen advancements, thanks to suitable adaptations in the constitution. There are great provisions for social reforms, for effective functioning of the economic bandwagon of the nation and building a great financial framework for the progress of the nation.

Let us all join hands in nation building and see our county transform from a developing nation into a developed super power.

A very good morning and hearty welcome to the gathering. I personally thank the guest of honor for today who has agreed to preside over the event.

A very warm welcome to our beloved principal and the teaching staff for guiding us in our efforts to make this day a memorable one.

I also extend my wishes to the non-teaching staff as well as my dear friends for their co-operation in carrying out the event.

We all know that 26th of January is celebrated as republic day every year. Today, i.e., on 26th January 2019, we are celebrating the 70th republic day of our nation.

We should be proud of living in a country like India. India is our motherland. It has offered us so much in terms of its diverse culture, unique traditions, and excellent hospitality across different regions.

We should all respect our beliefs and customs that allow us to be connected to the very fact of being an Indian. We are all enjoying the fruits of freedom that was achieved by freedom fighters after a long struggle with the British.

They adopted different ways to push the British out of our country, but their hard work and patriotism new no bounds.

The nation was seeing a time of chaos and utter confusion and there was no proper judgment of law during those times.

So, an effective constitution that prepared rules and regulations, created a legislative, implemented a judiciary was brought in place to run the country on the tracks of law and order.

We should be thankful to the great leaders who framed our constitution, because anything that happens in our country, takes place inside a legal framework and thus the constitution forms the basic reference point for all activities in the country.

The country has prospered so much in terms of science and technology. We see giants in technology from our nation work wonders. The constitution has provided separate provisions for looking into the technological development of the country.

We are a nation still deeply etched in poverty. People friendly schemes and schemes to uplift the downtrodden masses are special initiatives declared in the constitution.

We should adhere to the doctrines mentioned in the constitution and perform our activities only within the framework of law.

We should respect our great leaders who fought for our country’s independence. The wrong implementation of the laws under constitution has brought the nation under the paws of political leaders in the current scenario.

We should effectively deliver justice to people. Law should be implemented correctly in the courts. We should represent our nation in all walks of life.

We stand tall as citizens of the country. Our responsibilities do not end there. We should work for the welfare of the nation. We should respect decisions taken by the constitution drafters.

Our country is in dearth of great leadership at present times. We should choose only the right representatives who can run the country smoothly.

We need good leaders like Bhagat Singh, who can defend the country and sacrifice for the nation when situation demands.