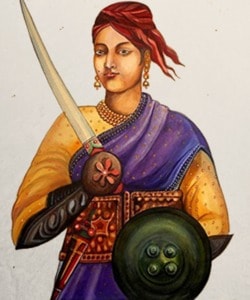 Rani Lakshmi Bai is an epitome of bravery, valor and sacrifice. She is the name that lights up each mind whenever one remembers about the sacrifice made by our freedom fighters.

She is proclaimed to be the most dangerous, ferocious and intellectual queen of all times. Struck the enemy at the speed of lightning with beauty and elan, she sacrificed herself for Jhansi.

Rani Lakshmi bai was born on 19 November 1828 to Brahmin parents. Her father, Moropant Tambe was a representative in the Peshwa’s court and her mother Bhagirathi Sapre was a scholar. Rani`s original name was Manikarnika or famously known as Manu Bai.

She was originally a resident of Betur, Maharashtra. She had spent all her childhood with Nana Sahib and Tantya Tope because she was the apple of Peshwa’s eyes. She was home schooled. She learnt horsemanship, fencing and shooting in her early childhood.

Unfortunately, her mother met an untimed demise when she was only four years old. Her father raised her into the woman of immense courage and determination we all know.

She was married to the Maharaja of Jhansi, Raja Gangadhar Rao Newalkar at the age of 18 only. It was only after marriage that her name was changed to Lakshmi bai according to the Hindu rituals. Her name has been derived from the name of Goddess Lakshmi which means prosperity and purity.

She gave birth to a baby boy, Damodar Rao who died after four months. The Maharaja was in deep state of shock and grief. Maharaja adopted a child from his cousin and renamed him Damodar Rao. The child’s custody was taken over in the presence of a British officer.

The Maharaja died shortly after, succumbing to his worsening health. He declared his son to succeed him to the throne before his death and also asked Rani Lakshmi bai to take over the administration till then. Rani Lakshmi bai never got to receive the pleasures of a married life as she was widowed at a very young age.

Meanwhile the sepoy mutiny was in its early stages and rumors had started to spread across the nation of the wrongdoings of Britishers. The sepoys thought that the cartridges contained cow meat. This infuriated them and caused an unrest among the soldiers.

To handle this chaotic situation, Britishers had to concentrate on this problem. They left the Rani alone for about three months to administer the kingdom alone. But kings from the neighboring Rajya’s did not let Rani breathe in peace. Jhansi was attacked time and again but the queen managed to ward off the attack by showing her excellent skills as a fighter and as a diplomat too.

Feud with the Britishers

After the Maharaja’s death Lord Dalhousie wanted to annex Jhansi’s territory. He thought that the Rani without her husband is weak and incapable of fighting back. But what he didn’t know was that this lady is capable of doing what most men can’t. He wanted to exploit the weakness of Jhansi.

Soon after he imposed the Doctrine of Lapse which does not give adopted heirs the right to succeed the throne. The Britishers asked Rani to surrender but she did not bow down to the whims of Britishers.

Lord Dalhousie by the virtue of his power as a Governor General asked Rani to leave Jhansi with a pension of Sixty thousand rupees. But she was adamant on not giving up her kingdom without a fight. Once gain she proved her mettle and valor. She taught us a lesson of determination and courage.

War with the Britishers

Rani Lakshmi bai was only eighteen years old when Maharaja died. The onus of all responsibilities of the kingdom and its administration was borne by her shoulders. The stories of her valor are sung amongst all countrymen.

With the fallout concerning the britishers, Rani had to come up with a plan to take them down.

She assembled her countrymen to form an army. Surprisingly, this army consisted not only of males but females were also made a part of the revolution.

Many brave warriors and loyalists like Gulam Gaus Khan, Dost Khan, Khuda Baksh, Moti Bai etc came up to support the Rani.  She prepared a massive army of about 14,000 rebels who were ready to lay their lives for their country and their queen.

When the Britishers attacked the fort of Jhansi, Rani’s warriors fought ferociously. The war went nonstop for about two weeks without seeming to end. When Rani realized that the chances of Jhansi winning this battle are bleak, she ran away along with her son.

She tied her son her back and fought bravely against Britshers to save her son. Eleven guards were accompanying her when she escaped Jhansi in the dead of night.

She ran away to Kalpi where Tatya Tope gave her refuge. At that time, the struggle for independence was about to begin.

Rani Lakshmi bai asked Tatya Tope for help to recover Jhansi. Allied forces waged a war against the Britishers. But they were defeated in the Battle of Gwalior. Rani suffered brutal injuries in the war and died after a few days.

Rani Lakshmi bai will always remain alive in our hearts for sacrificing her life without a single thought. She stands as a symbol of freedom from all gender stereotypes which classify women as weak. She was the one who ignited the torch of freedom among Indians.

She was the face of the first war of independence. More hearts like that of Rani Lakshmi bai are needed to develop this country. She loved her country and was ready to go to any lengths for her province. We all should also practice the same focus and dedication to serve our nation well.

Rani Lakshmibai was a great freedom fighter. She was born 13th November, 1835. Her parents were Morpant and Bhagirathi. Her childhood name was manu.

Bajirao peshwa was the son of nana sahib. Manu grew up with bajirao. As a child, she learnt to read and write, horse riding and wrestling. She received her training as a soldier along with bajirao.
She got married to gangadhar rao, the king of Jhansi, at a very young age. Unfortunately, her husband died and she started ruling over the kingdom.

According to this doctrine, the adopted son of a king or queen could not become a king after the death of his foster parent.
Lord Dalhousie refused to recognize damodar rao the inheritor to the throne of Jhansi. Rani became very angry because of his decision.

She did not want to give up Jhansi in his hands of the British. Lord Dalhousie attacked her fort. And thus began first war of independence in the year 1857.
Rani Lakshmi bai fought bravely, but she could not withstand the British army for long. She fought fiercely without bothering for her life, and died at the young age of 23.

She is  really a true example of Women Empowerment (Women power)