Rainwater harvesting is a strategy of collection and storage space of rainwater into natural reservoirs or tanks, or the seepage of surface water into subsoil water channels.

It is one of the purest form of water found on earth, because it is collected after it has vaporized and is almost as good as distilled water. Usually people in the rainfall-prone areas like Tamil Nadu, and parts of northeastern and even north-western India where there is a scarcity of potable water.

Rainwater harvesting is perhaps one of the easiest methods of obtaining water. It does not require extensive knowledge, technical skills or cumbersome machinery. Expense-wise too, it’s extremely affordable.

All it requires is a waterproofed structure within the ground or over the ground that can hold the water during rains and prevent its loss as seepage. Some people employ plastic tanks which are connected by means of pipes to collection pans.

Rainwater harvesting is also done in many homes where they channel the rainwater collected from the roof drain pipes into a waterproof tank. This water can be used for plants as well as for basic washing. With minor filtration, it can be an excellent source of drinking water.

Why is Rainwater Harvesting Practiced?

Rainwater harvesting is a very ancient technique. It is mainly helpful in: 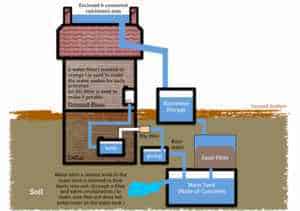 When toxic substances enter lakes, streams, rivers, oceans, and other water bodies, they get dissolved or lie suspended in water, or get deposited on the bed. Today, many people dump their garbage into streams, lakes, rivers, seas, thus making water bodies the final resting place of cans, bottles, plastics, and myriad of chemicals.

In this situation extremely important to cultivate the practice of rain water harvesting. During the last fifty years, the number of industries in India has grown rapidly. But water pollution is concentrated within a few subsectors mainly in the form of toxic wastes and pollutants.

The effects of this water pollution are not only devastating to humans but also to animals, fishes, birds. Polluted water is unsuitable for drinking, recreation, agriculture, and industry.

The high nitrate content in groundwater is mainly from irrigation runoff from agricultural fields. Waste water from manufacturing or chemical processes in industries contribute to water pollution. All these adversities can be effectively mitigated by the use of rainwater harvesting units.

Since rainwater is already evaporated, it negates the collected water to undergo any further treatment as the concentration of contaminants in it reduces significantly. So we can use the water as is.

In these scenarios, rainwater becomes an extremely crucial practice in cities like Delhi, Mumbai, Chennai, etc. where rainfall is extremely erratic and the population pressure and growing industrialization has contaminated the sources of available freshwater.

Various techniques of Rainwater harvesting include

In rural areas, the following techniques are mostly employed

In this day and age of industrialization and modernization and, subsequently, pollution, the water around us is becoming more and more polluted every day, thus making rainwater harvesting an unavoidable reality.

Rain water is not Fool-Proof

Although with its advantages in tremendously vast applications, there are a few disadvantages to rain water harvesting. Due to excessive vehicular as well as industrial pollution, the concentration of oxides of carbon, Sulphur, nitrogen increases exponentially.

These oxides combine with precipitation (mostly in the form of rainwater) and convert to their respective corrosive acids, like carbonic acid, sulphuric acid, suplurous acid, nitric acid, nitrous acid, etc.

These combine with the rainwater and when this collected rainwater is used to agriculture or drinking, grave consequences like paralysis in humans and rotting in crops appear.

In that situation, rainwater is further treated to get potable water out of it which not only increases costs but also makes the process cumbersome and reduces efficiency of the system as a whole.

But still, with all these problems, too, rainwater harvesting remains an extremely sustainable source of resource management and conversation. Sustainability is the need of the hour in this ever growing world of industrialization and subsequent pollution. It’s where we live, so we better take care of it! Would you rather live in a polluted dump?

Rainwater harvesting is an extremely easy yet effective way of cementing a bright sustainable future for us and our generations to follow thus promoting biodiversity.

Biodiversity is of utmost importance for a healthy ecological balance as well as for survival of the variety of species we have or else, our future generations will have to bid for buying clean water and learn about greenery in history books, and cats and dogs will be found in sculptures in museums and we all have to live with oxygen masks.