Rabindranath Tagore was born on the 7th of May in the year 1861 in Bengal. He was a great writer, painter, musician and poet. In 1913 he was awarded the Nobel Prize for Literature for his book, “Gitanjali”, a collection of poems.

In 1919, Tagore criticized the British Government for the inhuman firing on hundreds of men, women and children at Jallianwala Bagh.

He returned the title of “Sir” given to him by the British government. Such was his patriotism. Tagore is well-known for the school he opened at Bolpur in West Bengal. It is called “Shantiniketan”. 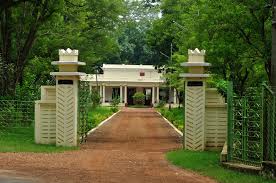 The school is held in the midst of green trees, colourful  flowers, chirping birds under the blue skies.

It is a school where Children act their own plays and sing and dance. These are the method used here to educate children.

No sounds of automobiles, no clatter of horse carriages. A school in the shade of tree. Students were taught to sing and dance. They were taught arts and crafts.  Children put up their own plays, sang, danced and learned new subjects.

Children from other countries also came to study here. Tagore was awarded the Nobel Prize in 1913. He gave the prize money to his school.

How delightful it must be. Later on Tagore established a University called “Vishwabharti”, where students from all parts of the world come to study.

Tagore died on August 7, 1741. Even today the entire nation thrills to the tune of “Jana Gana Mana”, the national anthem composed by him.

Rabindranath Tagore was a great poet of India. He was the first Indian to get the Nobel Prize for literature.

Mahatma Gandhi had great respect for Tagore. He called him ‘Gurudev’. Tagore was born in Kolkata on 8th May, 1861. His father was Maharshi Devendra Nath and his mother Sharda Devi.

Tagore was taught at home. He started writing from a very young age. He was a very talented child. Tagore was a great poet, a novelist, a storywriter, a painter, and a philosopher.

At the age of 52, Tagore won the Nobel Prize for his book – “Geetanjali” on 13th November, 1913. Most of his books are in Bengali. He wrote on various subjects like social reform, music, religion, politics, education etc.

He gave us our National Anthem. His poem includes Geetanjali Puravi, The Evening Songs and the Morning Songs.

Tagore was a very religious person. He established a unique university, Shantiniketan, in Bengal. HE died on 7th August, 1941.