Poverty means the condition when the people are extremely poor. They don’t have money to satisfy their daily needs as well as food, shelter and clothing.  It is directly related with nutrition. People living below the poverty line are malnourished and hence are prone to diseases.

There are two types of poverty

Poverty forms a vicious circle, a never ending one.   As the savings are low so there is less investment, if investment is less which ultimately leads to lower income and hence, poverty again.

This is indeed the main reason for poverty. Poor people tend to have more children in a hope that more people mean more hands. So they keep on growing their family for increasing money.

They don’t think that more children will also mean more food and money requirement. They should be told this fact that they should go for a family planning.

This is another reason behind poverty. In urge for a baby boy, people keep on expanding their families. This is wrong. The government has also made a rule that, if people have more than two children, they will not be given any additional benefits.

Education is the backbone of a strong nation. In India, people in villages or the lower class people don’t send their kids to the school because they feel it is not worth.

Child labour does not allows poverty to stabilize. The future of the country are working for economic activities rather than going to school and learning.

Government has also announced free education up to primary classes for children. People should be motivated to send their child to school and gain knowledge. 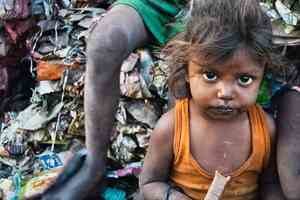 The natural calamities such as floods, earthquakes, hurricanes etc destroy the homes and businesses of many people. Thus, they are forced to live life of a poor.

These factors are also responsible for damaging the agriculture. This makes farmers live a poverished life.

The land is the main source of income in agricultural economy like ours. But the distribution of land is very uneven. Some people have a very  large portion of land while some have a very little in their hand. So unequal land means, the person with less land will earn less.

As there are less employment opportunities, there are people who are wither unemployed or under employed. Most of these constitute the uneducated farmers or the illiterate villagers.

Government is conducting these trainings at a very low or no cost. People should enroll themselves in it and learn some course so that they can earn to make their both ends meet.

They are not allowed to work in industries or start their own business. The only thing by which they can earn money is by working under the higher class people.

Social Evils such as dowry, taking drugs, corruption etc are contributing a lot in the poverty. People take debt or loan to arrange a marriage function, or to give dowry which in turn results into poverty.

Even in offices, the officers demand bribe to get the work done. The common man has to give money even for the basic of thing done.

People are not fully motivated to work. Rather they feel that begging is the last option. They beg and make their both ends meet.

Many NGO’s have taken this on priority and are educating and motivating them to do work. so that they can lead a good and respectable life.

Poverty is a very big concern for the developing nation like ours. Our government should take strict actions or plan something to eradicate poverty from our society.