What defines people? What could possibly be the one true attribute that changes the way we lead our lives? Words like; perseverance, commitment, hard work is ingrained in our psyche. Unfortunately, these words amount to little if we don’t implicate them in our lives. Really, seize the day, Crape Diem it and persist through hells fury and achieve what you most desire.

Let’s talk about Helen Keller for a minute or two, just so that we can fully comprehend the unbelievable nature of her story. She was rendered blind and deaf due to a severe illness at the age of 19 months. She could have easily given up on herself – held her hands up and well, given up.

But what makes her stand is not her willingness to give in to her illness but her capacity to tread on even when the road is etched with hurdles. It’s important to remember, the anecdotes that have been narrated to us over and over again is not about the people who were led astray but the ones who conquered.

The Japanese proverb: “Fall seven times and stand up eight” is what resonates in my mind, at the moment. Well, as you can see the Japanese know everything. Just look at the progress of their country in spite of the harrowing case of Hiroshima and Nagasaki.

They managed to get their economy going within a limited amount of time. Their country, or should I say Island is booming with prospects despite their grueling past, they lost the Second World War, nuclear bombs were dropped, their geographical location is prone to tsunamis but they don’t bow down.

The notion to give up is not a part of their dictionary; however, do you know what is – ‘Ganbaru’. This world encapsulated the philosophy the Japanese abide by: “working with perseverance.” 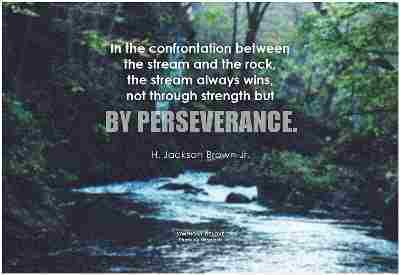 The only question that remains to be answered is that if they can do it, why can’t we? It’s a simple question, the answer is simple too.

The reason we show incapacity is because we are steeped in indolence. We are not incapable but we love the inactivity.

Yes, I am using the word – we. It’s obvious we are all plagued by laxity; I am not going pretend that I am not. It’s the disease of the generation, but overcoming it is important.

So, what do we do about it? How do we let our perseverance take motion? We get up and start working, but it’s not that simple. Let’s make a small start, try to visualize your goal. How it would look when you finally achieve it. This helps, it will pump you up with enough motivation to emerge a victor or not, but that not the point at all.

Visualization of your end goal, however, does not entail day dreaming. I suggest that while you are about to work you need to keep yourself energized emotionally. Don’t allow anything to drain you, every time you fall, the visualization of your goal would keep you pumped up. Remember that if the Japanese could do it then so can you!

Take it slow, perseverance does not mean that you will take in too much responsibility and will gradually fall of short of ways to fulfill them. Achievable goals will be your mantra for each day. Always remember, “Slow and steady wins the race.”

One of the major factors to be kept in mind is that – you might fail. Perseverance does not guarantee victory; it values determination and not giving agency to failure. Failure is a part of life, perseverance teaches you acceptance of that loss. Therefore, like everything in this world giving up is the true failure, not your will to try.

It’s a simple life. We have our dreams and most of the time we lost the drive to attain it. The sustenance of that drive is the key to achieving it. But how many people do we know who have managed to not give in? When the disillusionment sets in there are not much we can do.

But one thing we can do in spite of everything is trying our best. In the end, it’s a long life and at least we don’t have to despondently tell our grandchildren – “I didn’t even try.”

Just imagine, if the Japanese had given up what would have become of them? Ask yourself this question every day – it’s a good life, persevere through it.