Essay on Autobiography of a Pen for Children and Students 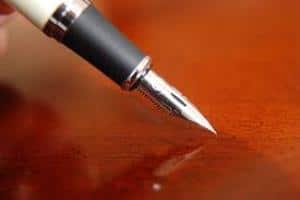 You use me every day of your life. Every time you want to remember something important, you think of me and search for me. I’ve become an integral part of your daily life, carrying me around everywhere, just in case you need to take a note.

I see many of my newer brothers tossed out after their life source has run out. But I’m an exception. Unlike them, my life source can be refilled and used again. It’s an endless cycle. I’ve seen a lot in my life, learnt an ocean, written hundreds of poems and stories, and seen a lot of people pass by. I remember them all, but I remain here on this desk, still observing.

The first thing I remember was the assembly line in the factory. People were putting together pieces of me by hand. They put a protective casing around my delicate ink cage. Then they added an intricately carved nib point, through which the ink flowed. Next I knew, I was placed in a foam padded case, and moved along.

Then it was my chance. After a lot of moving time, they again put me with my brothers. After a few minutes we felt were airborne. It was only after I had learnt about human transportation, which I realised that we were on an aeroplane. We were in the air for far less a time. Apparently air travel is faster. Then we were unloaded and taken to shops.

The shop that I got into was huge. It was well lit and maintained, with rows of fancy products for sale. I was placed in a glass display, on my case. Apparently I was a different type, a customised more expensive piece. So I mostly saw people taking home my brothers

They’d be interested in me, and my design, but the price would always drive them away. But it didn’t matters since I was really proud of my appearance, I felt special. Then my day came. A wealthy merchant came in the shop, saw me and he had to have me. He took me home, proud to own me.

Life being a pen

At first he would refuse to use me to write, fearing he might ruin my intricate carvings and smooth edges. Little did he know that the longer he waited, the more my life essence was getting depleted? I grew weaker day by day.

Then one day he gathered enough courage to dip my inner in Ink, my life source. I felt a surge of life go through me. I was alive finally, the way I was made to be. That day onwards, he used me for everything, writing everything down, just to show me off. I am learning every day.

Before long, I knew everything about Accounts, the daily events occurring all around me, and the world. The merchant never forgot to take me, never forgot to refill my life source.

I met many of my kind throughout my life, but no one stayed for long. Apparently they had started making cheaper pens, which could be thrown after a single use I would always feel broken, seeing those sad souls waiting for their fate, not being able to do anything to save them. Isn’t it cruel? To be labelled as expendable since birth.

I’ve outlived everyone I’ve known. Even my master, the merchant, his son, his grandchildren and further more. Now I’m speaking to you, you, who have inherited me.

Use me wisely, young one, for I have wisdom beyond your comprehension. I have knowledge of the present and the past. I’m even sure I can shape your future, your life that’s ahead of you. I hope you realise the responsibility you’ve been bestowed with.

You can change your future, this world’s future. For the better or worse? That is your decision, since I’m obliged to do your bidding. But I hope that like your ancestors, you’ll do the world well.