The rulers of the south Indian region Pallavas made their way in the history by providing few of the finest rulers, they bestowed the country with their efficient craftsmanship and were also responsible for introducing new styles of architecture and even some of the prominent authors of India.

Of the many prominent kingdoms that ruled India, Pallava dynasty was one of them. This empire is very well known, and its name is also placed which gave India its beautiful art and architecture. This dynasty is also credited with providing one of the best poet of its times. Before we begin to explore how they were able to manage a good hold in India, let us first discuss who were Pallavas? Pallavas were the rulers of the southern part of the present day India.

They ruled what now is known to be Northern Tamil Nadu, Karnataka and major parts of modern day Andhra Pradesh. So in short Pallava were the dynasty that ruled south India. Its date of existence is not accurate however many renowned historians have summed up the ruling period to be from 275 C to 897 C.

Few of the prominent king of this dynasty would be Simhavishnu, their mighty king; Mahendravarman I and Narasimhavarman I. There have been, many analysis as how the kingdom rose to its power. One of the most accurate explanation is that it was formed after the decline of the former two powerful south Indian kingdoms and that would be the Cholas and the Satavahana Empire.

The Pallavas used to serve the later and so their decline was the result of the rise of the Pallava Dynasty.  As they rose to power, their expansion of the kingdom knew no boundaries, they even reached to the present day Afghanistan. The word “Pallava” in Sanskrit would mean “twig”.

The reign of Pallavas can be classified as two different times; the early and the later rule. The early rule saw the ascending of Simhavishnu and the later saw the rule of this mighty king who brought many reforms and was also responsible for building and being a patron of the UNESCO acclaimed world heritage, Shore Temple in Mahabalipuram.

Kanchipuram was chosen to be the capital of this great dynasty. As it was mentioned earlier the continuous disputes between the two former major south Indian kingdoms gave rise to Pallavas, their dominance was majorly in the Telgu region.

Simhavishnu the renowned king of the Pallava dynasty was the prominent reason for the expansion of the dynasty. During his reign, this kingdom was able to hold power against the Cholas, the Cheras and other south Indian kingdom. He was also responsible for the development of the Pallava scriptures and was also a patron of many literary works as well as the buildings and architecture.

Political Influence of the Pallava

Simhavishnu was the most prominent king of this dynasty. He was the sole purpose of expanding the Pallava Dynasty. He attacked the Pandyas and the Cholas and buried their reign and made Kanchipuram the capital of the Pallava Kingdom. His reign resulted in the expansion of the kingdom beyond the Kaveri River. He proved to be a mighty king so much so that a scripture of him along with his two queens is placed at the Mahabalipuram.

After him, Mahendravarman, the successor of the dynasty and son of Simhavishnu, ruled the kingdom and succeeded in ruling very efficiently. He was said to be equivalent to Harshavardhan, as he was a true follower of Jain at first but later he followed and became a devotee of Shiva.

Along with his political influence he was also a lover art, dance and music. Mattaritasa-Prahasana was one of the play that was authored by him. He introduced many different form of architecture, of which cave style was what the prominent one and that is what distinguishes this dynasty to that of other forms of architecture.

There were many other great successors to this kingdom who fought battles, introduced many different styles of art and culture into their kingdom. The later kings however did not proved to be as efficient as their predecessors and so they could not hold the power for very long.

And so Pallava dynasty lost its control then the rising Chalukyas and its king Vikramaditya. Parameshwaravarman II, was attacked by the combined forces of the Chalukyas and the Cholas and so he lost the power to them.

Even after this, somehow Pallavas managed to rule till the ninth century after which the Chalukyas rose to power shifting their capital from Kanchi without damaging the beauty of the former capital.

The rule of Pallavas brought and introduced many forms of architecture designs such as Dravida form. This form was not only prevalent in the southern part of India but also many Indian colonies that were there in that rule such as Cambodia, Java and even in Vietnam. 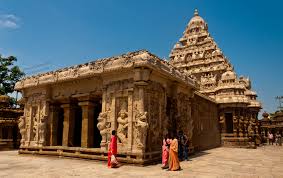 These colonies saw significance change in their building forms and they were majorly influenced by the Pallavas. King Mahendravarman, was responsible for the introduction of the, finest of its kind- the rock cut temples such as seen in Bhairavakonda and Anantesvara which is situated in Undavalli.

King Narasimhavarman I is to be credited for the introduction of the chariot system of architecture. Or to be more precisely called the Ratha style of rock cut temples. These chariots were made from one sole big chunk of rock. Next came the different form of art which was the shore style of temple which was mentioned earlier.

King Narasimhavarman the second was known to make temples such as the Shore Temple of Jalashayanaswami, which is a fine example of the skilled craftsmanship of the Pallava workers.

The Kailashanath temple is also one of the fine examples of the Pallavas. It is situated in Kanchipuram. Arjuna’s Penance is the remarkable example of Pallava craftsmanship that is situated at Mahabalipuram.

Literary Works of the Pallavas

Pallava rule saw the major use of Sanskrit in its rule. This dynasty even brought some of the finest writers such as Bharavi, Dandin who penned down Kiratarjuniyam and Dasakumarcharitam. Sanskrit was known to be their official language and was used in the capital Kanchi as well.