GIFTING A LIFE: AFTER THE LIFE

While death takes away chimes of life from us, we can still help someone, by giving them a fresh chance to live a healthy life, by way of organ donation.

To understand organ donation, first we need to know why it is important at all. Despite various major advances in medical science so far, organ transplant is the only alternative available in certain cases to save the life of a patient, suffering from organ dysfunction/ organ failure.

For an organ transplant, which is a medical procedure, wherein a persons’ dysfunctional organ or tissue is replaced by that of a healthy persons’, we require a healthy, functional organ from a donor. Which may give a terminally ill patient a new lease of life, alongside improving his/her quality of life drastically?

Organ donation is the harvesting of an individual’s organs after his or her death, for the purpose of transplanting them into a person in need. In this process, the person who donates the organ is called a donor, while who receives them is called a recipient.

Organs which can be donated include heart, pancreas, liver, lungs and kidneys.

How to donate organs?

As we discuss this, the question – who can donate their organs? must be addressed beforehand. Practically speaking, any of us can donate our organ, irrespective of age, religion, caste, community, present or past medical conditions. Even a patient with Hepatitis C can donate organ to the other Hepatitis C patient. Similar is the case with Hepatitis B, but it happens in most rare cases. Most cancer patients too may donate corneas. Besides, children can also donate their organs, after their parents’ consent.

To donate organ, one needs to pledge and register during his/her lifetime, that after death certain or all organs from their body can be used for transplantation in a patient, by signing up for the same.

For this, a donor needs to fill a prescribed consent form which can be accessed from the website of NATIONAL ORGAN AND TISSUE TRANSPLANT ORGANISATION (NOTTO); an authorized agency for this purpose under DGHS, ministry of health and family welfare, or a hospital/medical facility approached for organ removal. In case of deceased donation, a written consent in a prescribed application form from the legal custodian of the body after death of the patient is required.

A potential donor may also approach organ donation agencies and NGOs dedicated for the cause, for a ‘Donor Card’. This card, although not legally binding, is a way of expressing ones willingness to donate his/her kidneys.

Besides, there are two types of organ donation–  living donation; when a living person donates an organ or part of organ for transplantation, and deceased donation; where organs of a naturally dead or brain dead person are donated.

Why do we need organ donation?

According to Union ministry of health & family welfare, about 500,000 people die every year in India because of non-availability of vital organs. Out of this, 200,000 die out of liver disease and 50,000 out of heart disease.

Around 150,000 people needs a kidney transplant but only 5,000 get it. Despite major advances in medical science we have made so far, organ transplant is the only alternative available in certain cases to save the life of a patient suffering from organ dysfunction or organ failure.

Organ donation is legal under Indian law. For this purpose, Indian government enacted Transplantation of Human Organs and Tissues (THOT) Act, 1994. And also legalized the concept of ‘brain death’.

Brain death, unlike Coma, is an irreversible and permanent discontinuance of all brain functions,  in which a person is unable to sustain his own life, but vital body functions can be preserved in an ICU, for a short period of time, until they are removed.

Lack of awareness on the issue of organ donation, and tackling it. 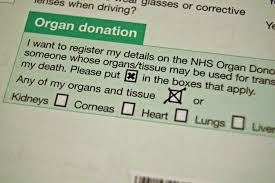 Even with a population of 1.2 billion people, the average of organ donors in our country stands out to be mere 0.08 persons PMP (per million populations).

While in countries like Singapore, Belgium, Spain, which follows a system of ‘presumed consent ’, (permitting organ donation by default unless the donor, during his lifetime, has explicitly opposed it) have an average between 20-40 PMP.

The issue, how people in our country are suffering due to paucity of available organs for transplant , which we discussed above, needs to be addressed very soon if we don’t want to lose valuable and promising lives anymore. And, spreading awareness on this important issue as much and far as possible is the best way to improve the situation.

Organ trading, which is not legally sanctioned, is also becoming more and more widespread these days, causing loss of vital organs to the innocent people, who falls prey to such rackets involved, also needs to be tackled with stringent legal action.  Besides, various misconceptions, like donating an organ involves a charge, or after organ donation the donor’s body may get disfigured etc., needs to be clarified soon.

Donating an organ is totally free of charge, and if there are some expenses incurred while removing organ from a donors’ body and implanting them in recipients’, they are to be borne by the family of the recipient or the Organ removal and donation agency involved.

Also, there is no disfigurement of donor’s body after removal organs from his body.  These, and other such mistaken beliefs, causing hindrance in participation to this noble cause, should be dealt with strongly through social and print media campaigns, awareness weeks at hospitals, schools, places of work etc.

However, emotionally it’s very difficult to think of donating organ of a loved one, one has just lost; this decision is very generous and worthwhile, capable of saving many lives.

The act of organ donation has the ability to comfort grieving families of terminally-ill patients, alongside giving a sense of content to the family of the donor also, by the fact that their loss helped someone recover their life, health and happiness.

By way of donating organ, a donor can save lives of up to 8 individuals, while with tissue donation he/she can heal up to 50 lives. Therefore, it is highly recommended of all of us to pledge organ donation during our lifetime, to give someone a reason to smile and cheer for his life, even though we wouldn’t be there to see it.

To conclude, it won’t be an exaggeration, if organ donation is said to be a means of “GIFTING A LIFE, AFTER THE LIFE”.