3000 years before, from now, the ancient games took place in honor of Lord Zeus. It was all started from a town named Olympia near the Peloponnese peninsula in Greece. Olympics were first held in 776 BCE. These games were held every 4 years from 8th century B.C. to 4th century A.D. Coroebus was a cook from ancient Greece who first won the first Olympic game, becoming the first-ever Olympic champion by winning a 192-meter race.

The name Olympic is being given due to the place Olympia in Greece from which it has been started. The ancient Olympic Games were put on a stop when the Romans conquered the Greek empire. When the Romans conquered Greece during the mid of the 2nd century B.C. slowly, the standards of the game started to diminish. Moreover, in A.D. 393, the ancient Olympic Games were stopped.

The rise of modern Olympic games

Then it took another 1500 years when in 1896, the first modern Olympic took place in Athens, Greece. It was possible due to the efforts of a Frenchman named Baron Pierre De Coubertin. He was a person who showed a keen interest in the physical enhancement of people and was dedicated to the work of physical education for people. When he first visited the site of the ancient Olympic Games, he came up with a new scheme to start these games again with a different plan. When he went back to France, he arranged a meeting with the sports authority of France in November of 1892. He then managed to create an Olympic community, which was the leading organization that made the Olympics possible again.

The history of modern Olympics

In 1924 it was the first time when the 8th Olympic Games took place in Paris. It was the first time when the Olympics were held anywhere outside Greece. With 100 women and a total of 3000 contestants from around the world took place in those games. The level of the Olympics started to rise. From them, it became a matter of prestige for every country. Every nation desired to be part of the Olympics. Initially, contestants from 14 nations competed in the first modern Olympics.

It was until the year 1994 that summer and winter Olympics used to take place in the same year. Participants from around the world gathered inside the stadium on the day of the opening ceremony of games. These contestants march around the stadium. Greece, due to the original place of the games, is given priority, so the sportsmen from Greece are the first in the march, and the last are from the country in which games are being organized.

On the opening ceremony of the games, several athletes are selected to raise the flag light the Olympic flame. This flame lights up until the last Olympic game. Every sports person who takes part in the game takes an oath, which is commonly known as the Olympic oath. This oath, a vow that every athlete takes that took part in the game, will play its honesty and will perform his best.

The winners are being honored with gold, silver, and bronze medals according to their positions in the game. The medals are being given at the end of every event of games. The athletes are being selected by the sports authority of the respected country to represent their nation, the Olympic Games. It is the duty of the sports authority of the country to select the finest athlete to represent their nation. Whosoever wins at the end of each event medals are given to them with the national anthem of their country being played at the sports arena.

It is the duty of the international Olympic committee to make proper arrangements for the games and the arrangement of commute and proper living facilities for the athletes. The places where the contestants stay during the games is known as the Olympic Village. The primary duties of this committee are to look after the safety, living facility, training grounds, transport for the athletes. Management of stadium and living space is also the duty which this committee has to take care of.

The 5th of September 1972 is considered as a black day in the history of the Olympics. Many terrorists entered the arena and killed several athletes. These games were held in Munich, Germany.

Only with the efforts of Baron Pierre de Coubertin, it was made possible for the Olympics to happen again. We should respect the athletes who sacrifice their comfort and luxury for the respect of their nation, for the peace of the world, and the sake of friendship.

The first Olympic Games took place in 1896 in Athens in Greece. The aim of the Olympic was to bring together athletes from various countries in order to promote world peace. This aim remains the same even today. The Olympic Games include a variety of individual and team sports.

In 1920, the first Olympic flag was presented. The flag contains five interconnected rings upon a white background. Each of the rings stands for one of the five major continents; they are interconnected to symbolize that the world can work towards peace through this international competition. 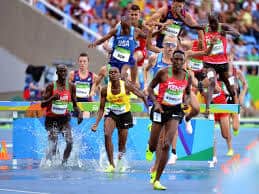 The rings are blue, yellow, black, green and red. These colours were chosen because at least one of them appears on the flag of every country in the world.

The Olympic Games are held once in every four years and at different location each time. Two locations are chosen each time-one to host the winter Olympics and the other for the summer Olympics. It’s a very special honour to participate in the Olympic Games.

Participants spend years training for this special event. Qualifying for a spot on the Olympic team varies for each sport. However, dedication, skill, motivation, hard work, and desire to win are a part of the right formula for anyone dreaming of participating in the Olympic Games.

For each event the first three prizes are the gold, silver and bronze medals. In 1896, first prizes were silver medals because gold was considered of lower value than silver. At the Olympic Games at st Louis in 1904, gold replaced silver as the first-place medal.

The gold medals presented today are actually made from sterling silver. They are then covered with a thin coat of pure gold.

The Olympic Games give athletes the opportunity to show off their strength and skills. They are very popular because they bring together people from all nations of the world, not only to compete in true sportsman spirit, but also to remind us of the quest for peace among all nations.