It was during the 1700s the East India Company started to rule India. They had set up various small colonies in the different parts of the country. The Company wanted to bring India under the British rule for their own benefit. During that time India was rich and famous for spices, jewels and many types of textile industries.

Moreover, India had a very huge population. There were enough people to work for the British and this is what they (British) wanted.  The British wanted to rule over India, make the country under them and take away whatever India had. They started to force their rules and orders on the people of India. When someone did not follow their orders or instructions, they were punished very badly.

In the year of 1857, there was Sepoy Mutiny. This was when the first war of Independence started. The freedom struggle started during this period. There was rebellion everywhere. There was fight between the British army and the Bengal army.

Many incidents and movements took place during this war of Independence that shook the entire country. Out of them the biggest ones were Jallianwala Bagh Tragedy, Khilafat Movement and the Rowlatt Act. During this freedom struggle there were many people who were representing the people of the country and they were their leaders. They were Gandhiji, Subhash Chandra Bose, Jawaharlal Nehru, Lala Lajpat Rai and many others. Everyone had their own method to fight for the country’s freedom. But they had the same motive, that is, to get independence from the British.

Introduction of the Non-Cooperation Movement

The war continued for very long time. Many people lost their lives and their families as well. There was destruction in the country. There was no growth in the country. Out of all these, Gandhiji came on the front and he introduced many movements.

Gandhiji was not involved in non-cooperation before but what injustice the British Government was doing to the country made him do it. At first he was loyal to them but after the Jallianwala Bagh Tragedy, Khilafat Movement and the Rowlatt Act all his loyalty went away.

It was then that he introduced the Non-Cooperation Movement. He came to know that the British Government would not treat them fairly so he tried removing all the cooperation which was presented between them. 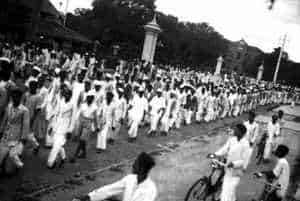 Non-Cooperation movement was first launched in the month of August, 1920. During this time there was a strike in the entire country. Gandhiji requested the Congress to launch the movement due to the three problems.

These were the killings which took place at Jallianwala Bagh in Punjab, violence due to the laws of marriage, Khilafat movement and to achieve Swaraj. The other reasons to initiate this movement were the Home Rule Movement, bad economic condition after World War I, disillusionment due to the British Government after World War I and Montague-Chelmsford Act.

The main motive of this movement was to throw the British out of India. They were against the violence done by the British. They preferred peaceful means to get independence from them.

Meetings of the Congress and scenario of the movement

Moreover due to the British Government many people lost their lives in the tragedy in Punjab and also they were not doing anything to solve the problem of the Khilafat movement. Finally, the Congress decided to support the Non-Cooperation Movement initiated by Gandhiji.

There were many members who supported this movement while some did not. Shri C. R Das, Mrs. Annie Besant and Pt. Malaviya were against this because according to them this huge mass movement would make the British Government destroy the country more and then there would be an increase in the violence everywhere. While the Anil Ali brothers and Pt. Motilal Nehru supported this movement.

In the month of December the same year, there was another session at Nagpur. This time the resolution for the Non-Cooperation Movement had more supporters compared to before. In this session, the Congress made changes in their resolution by using right means for the movement and maintaining peace from their actions.

This was done to achieve Swaraj from the British. After the Congress met for meetings in Calcutta and Nagpur, there were many changes made in the policies and the program of the movement.

These changes were to promote the goods produced in India itself and boycotting any type of good from outside India, withdraw from the law courts, not taking any posts or titles, disagreement by the soldiers and clerks to work in Mesopotamia, no official Durbars, withdraw from any schools run by the government or assisted by the state etc. Most of these changes were actually trying to put into reality by Gandhiji.

He travelled all over the country so that it was easier for him to get support of most people for the Non-Cooperation Movement. As one of the changes in the policies was not to go to the schools run by the government or the ones which get help from the state, due to this many children left going to school.

According to the Non-Cooperation Movement initiated by Gandhiji, the movement was clearly against violence. Everyone supported for non-violence.

But during this movement, the members were involved in a violence which took place at the Chauri Chaura in the united Provinces. In this incident a few constables lost their lives. After this incident there was an attack on the police outpost in the month of February, 1922.

After the incidents of Chauri Chaura and the attack at the police outpost made Gandhiji take a big decision to suspend the Non-Cooperation Movement. This decision of Gandhiji was not supported by some of the radical nationalists of Congress.

After the party was formed they aimed to enter the British Council and finish them from inside. At first Gandhiji did not support this party but later he gave them their own freedom to associate with the British.

Result and Importance of the Non-Cooperation Movement

The movement turned out be a failure as it was suspended and even Swaraj was not achieved in one year according to what Gandhiji had said. But this movement had some major impacts. Even though the Non-Cooperation Movement was suspended the urge to fight for freedom went high because of the leadership played by Gandhiji. People started to become politically strong and they started not to fear against the British.

They learnt about their rights. Their trust for the Congress increased because they were working hard for the betterment citizens of the country. The Non-Cooperation Movement was against violence. They did not use any arms. This made people to understand in order to fight against the enemy, it is not always necessary to have arms and weapons.

Many Muslims were involved during this movement. This helped to maintain harmony among everyone. The Swaraj Party became more enthusiastic about the patriotism for their country under the guidance of Gandhiji. The citizens of the country learnt a lot from the belief of Satyagraha by Gandhiji.

The Non-Cooperation Movement helped in the promotion of khadi. As people started to boycott goods from outside India, There was an increase in the sales of goods produced in the country itself.

The handloom products started to get back popularity in the country because of Gandhiji. Even his chakra became famous. This movement became very important in the freedom struggle of India because it brought all the people together for one motive to gain independence.