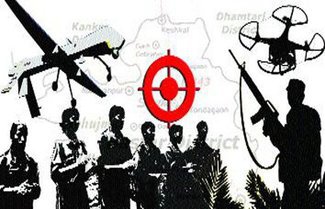 First let us know about what is naxalism. Well, it has a very close relation with terrorism. Terrorism takes place on a bigger level. Naxalism takes place on state level. They both are threatening. They are life-taking. They result in death and destruction.

It generates fear into the minds of the people. Terrorism takes place on the country level where the attacks are made from other county. When in consider naxalism, then it the attack which is made in the state. It is done by the people of country itself.it is very disgusting for the people of the same country to perform such acts.

The aim of the naxalites is very clear. They want to generate fear and danger. They want to become the ruling power. They want to take everything under their control. They have no mercy. They are people with no emotions. They are the human beings in the form of stone. It is a matter of very great concern.

There are several stated facing this naxalite problem. The life of the people there is in danger. There are states like Chhattisgarh and Jharkhand who are highly under these naxalite attacks. They hide themselves into the bushes and attacks people.  Jharkhand and Chhattisgarh is mainly forest area.

There are mountains and roads cutting through them. There is risk in moving out during evening. It is the most dangerous time. There is greater possibility of being trapped.

There are several cases of people being looted and murdered. The government is not able to function properly. Let us examine the root cause of this naxalism. It all started after the independence. Before independence there was no such activity. There was peace and harmony. When people got freedom there was no unity left among them. Thus it led to hatred and prejudice. It was necessary to gain unity than freedom.

The Asian countries like Africa fought against the colonial power. They managed to throw them away but resulted in all fights between them. There was no unity among them. They hated each other. The entire meaning of freedom went in vain.

The western world let to two world wars and nationalism in India led to terrorism. People can only live in peace when they a common cause. They live together. They have no disputes. They share the same physical place. This will lead to freedom.

There are several other causes for the loss of unity. It is the development of the society. New technologies came up. There was rise in industries and much more. The globalization made people apart. Before, in the old times, there were orthodox beliefs. They were not completely correct.

But it managed to unite people. People participated together in rituals. They helped each other. There were strict social organizations. People had some kind of connection with each other. But since the science progressed, there was huge gap between individuals. There was the introduction of gadgets. The society became fragmented. No unity, no harmony.

What is the use of freedom when we are still fighting. Before the independence we fought against the British. After independence we are fighting within our-selves. This is such a shame. This is also one of the reasons why India is behind. Other countries have progressed a lot.

They are united. They work together. They don’t fight among themselves. The unity is their strength. To maintain unity in India is a biggest challenge. India is country with diverse culture. There are various religions. There are various castes and creeds. There are people belonging to different communities.

There are numbers of languages spoken. People here are very biased. They are protective when it comes to their religion. They are united on the name of religion but not as a whole. This fragmented unity would lead nowhere. The unity needs to be maintained nation-wide. Once we are united nobody can defeat us. There will not be any problem of riots and battles.

Use of violence can never bring peace and harmony. Even the biggest fight of freedom was done on non-violence. There will only be destruction and damage. There is no example where violence brought prosperity. This can never happen. It is just not possible.

The people should be connected. Be there for each other. When you help someone in need, the other would surely help when you are in need. The only one thing that is required is unity. The naxalites may have various reasons to perform violence. There can be reasons like, they might be the minority. They might be belonging to the lower class. The lower caste in our nation is suppressed a lot.

They are repressed and tormented. They might be the one whose voice is ignored. They must not have got their right. In India there is a huge problem of caste system. This has led to several miseries. These naxalites considered the means of violence. They did so to raise their voice.

They did so to show their dominance. They might have some psychological problem. This could be one of the possible reasons. Killing people is not a usual act. It cannot be done by a stable and normal human being. It is possible only in a case where they must have been tortured. The torture led to the feeling of revenge.

Whatever may be the reason, it is a great threat to our nation. Our nation is suffering from both the spheres. On the outer sphere there is terrorism. In the inner sphere there is naxalism. This has to be stopped. It is engulfing the nation. It may have very bad and adverse effect. Killing of people is not acceptable.

There is loss of people. There is loss of property. There is loss of faith and hope. Everything is at stake. The very root cause is the dis-unity. We need unity and everything will settle down. We will be in peace. It is a tough task but not impossible. It will be a slow process. It would require patience and trust. But it will prove to be effective.