The Hindu festival of Navratri is celebrated with great pomp and splendour in India. The festival is so called as it encompasses celebrations over a period of nine nights.

Navratri is celebrated four times in a year; however, the festival that falls during the autumn season is the most popular one. This is referred to as Sharada Navratri and is celebrated in the month of September or October to honour goddess Durga. 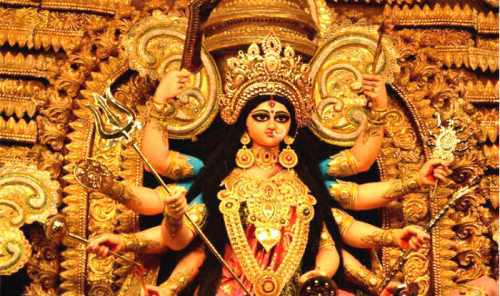 In these regions,  Navratri is referred to as Durga Puja. As per the holy scriptures, the demon king Mahishasura ardently worshipped Lord Siva and attained immense powers. He went on to commit atrocities on people. The holy trinity of Brahma, Vishnu, and Siva combined their powers and created goddess Durga to safeguard the world from the demon.

Mahishasura was attracted to the goddess and requested her to marry him. She agreed to do so if he could defeat her in a battle. This battle is said to have lasted for nine nights, at the end of which the demon king was killed. These nine days were celebrated as Navratri.

Navratri is referred to as Rama Lila or Dussehra in these regions. This symbolises the victory of Lord Rama over the demon king Ravana, as indicated in the Ramayana.

Celebrations in the southern parts of India are centred on the victory of several goddesses or Lord Rama.

In a nutshell, the festival depicts the universal theme of the victory of good over evil. 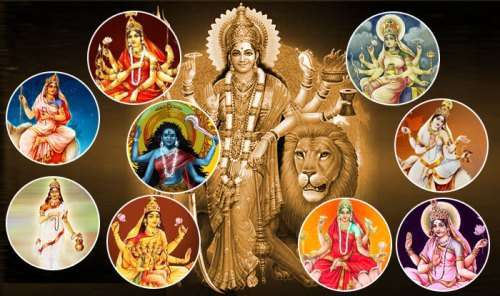 Navratri is celebrated four times a year in India, as highlighted below:

Navratri – Importance of Each Day

The nine days of Navratri are usually dedicated to the nine incarnations (avatars) of goddess Durga:

Shailaputri is an incarnation of goddess Parvati. Clad in red, she is depicted as the direct incarnation of Mahakali. She rides the bull Nandi with a Trishula and lotus in her hands.

Brahmacharini is another incarnation of goddess Parvati or her unmarried self, Sati. She symbolises calmness and peace and is depicted holding a japamala and kamandal. The colour code for the day is blue, as it symbolises tranquillity and strength.

Parvati, on marriage to Siva, wore the half moon on her forehead, and Chandraghanta is a depiction of this form of the goddess. The third day is associated with the colour yellow, symbolising her vivaciousness.

Kushmanda is referred to as the creative power in the universe. Hence, the colour associated with this form of the goddess is green. She rides a tiger and is depicted with eight arms.

The mother of Lord Skanda or Kartikeya, Skandmata depicts the strength of a mother when her children are in danger. She is believed to have ridden a lion with her baby in her arms. The colour of the day is grey.

Katyayani is a warrior goddess and she is depicted with four arms. She rides the lion and symbolises courage; this translates into the colour orange for day 6 of Navratri.

This is the most violent form of goddess Durga. This depicts the form goddess Parvati attained on removing her fair skin to destroy demons Nisumbha and Sumbha. The goddess is believed to have appeared in white attire and her skin turned black in rage. Hence, the colour of the day is white.

The goddess depicts peace and optimism on this day; hence the colour associated with the eighth day of Navratri is pink.

Goddess Sidhidatri sits on a lotus and has the power of the Siddhis. She radiates wisdom and the beauty of nature and is also referred to as Saraswati Devi. The colour of this day is light blue.

In Nepal, Navratri is often celebrated as Dasain. During this festival, families come together and honour the bond between elders and youngsters through the Tika Puja.