The Banyan tree is known the national tree of India. Banyan tree is famous for its prop roots that emanate all over the tree structure and give it a big, magnificent look.

The banyan tree finds mention in many Hindu scriptures because it is considered very sacred and sages used to meditate for days together under the banyan tree and have found penance under the religiously important tree.

It is believed Buddha found liberation under a famous banyan tree. The significance and importance of the banyan tree can be extended to villages where they find their true need.

Villagers, in olden days and even in the present days double up as a big shelter area and also a place where villagers, after completing their day’s tasks sit down under the tree for a while, relax and have a light discussion with fellow villagers and then make a move towards their homes.

It is a place where lots of memories are created for so many people who have spent time under the tree, grew up admiring the structure of it and have also taken shelter under it many a times.

The banyan tree has a unique way of extending its structure. When the branches of a banyan tree grow up and become big enough, they start resting them on an adjacent tree which becomes a supportive tree for the extending branch.

In a few weeks, one can find that the extending branch of the tree would have extended so much that to our surprise; it would have actually thrown itself completely on the supporting tree.

The supporting tree which was good in its true form now appears to have been completely overtaken by the extending banyan tree, leaving little or no trace of the supporting, adjacent tree.

The trunk of the supporting tree thus becomes hollow from inside and its branches get dwindled and lost amidst the extending banyan tree. A banyan tree can extend from a minimum of 25 meters to a maximum area of hundred meters.

A banyan tree, by nature is a big, magnificent and large bundle of roots, trunk, branches, all spread across a very large area causing a canopy.

Banyan trees are commonly found in most parts of the country and people easily identify this tree without difficulty. That is to say that the recognition of the tree among common people of India is large and hence it was adopted as the national tree of India.

The cultural roots attached to the tree along with its deep significance in customs and Hindu traditions make it a popular choice for the national tree of India.

The banyan tree has a very long life span. The tree is a good example of long life spanning number of years. There is a popular belief in Hindu culture that if married women carry a few meters of sacred thread in their hands and tie it around the trunk of the banyan tree by chanting sacred prayers, they would be offered blessings by God.

Women in India also believe that their husbands can enjoy longevity and get totally rid of any problems if they worship god and tie sacred threads around banyan trees.

This is a popular belief and people follow this custom in many places of India, but the educated youth may prefer to think otherwise also.

A Large Home for many Creatures 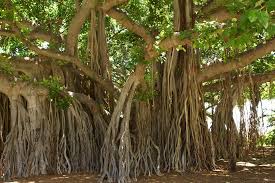 The big banyan tree is usually home to a lot of chirping birds where nests are formed, home to creeping insects and tiny creatures walking all over the tree.

The tree bears fruits, have beautiful flowers and leaves. So much in store in the banyan tree, that it is often called a large provider among all tree species.

The banyan tree has many medicinal properties as well. The liquid latex that comes from the tree’s bark finds many uses in commercial and industrial lubricant materials.

Fruits born by the tree are also of economic importance. There are also specific medicinal values attached with the tree that are used to cure many diseases and illnesses. They may be unknown to common man, but find mention in ancient scriptures and Ayurvedic system of medicine.

The tree is home to large variety of birds usually in the place where it is located. A large banyan tree thus forms part of many stories and novels that carry a message or moral with them.

The tree bears fruits, but it doesn’t eat the fruits it had born. It has leaves extending from branches which collectively form a thick canopy of shelter for people to come and relax under the tree.

Its branches give children a playful thing to swing around and make them happy. Butterflies’ and insects swarm around beautiful flowers to collect nectar. Birds find banyan trees to be a good home for themselves where they can find good shelter for their nests and in turn, a warm place for their young ones.

Message from the tree

It is a message that we have to take from the tree. We have to learn to be co-operative and harmonious with the people we live around. The tree gets nothing in return to the various services that it offers.

The whole of the banyan tree can be compared to a very big family where everybody is closely knit by blood but differences do exist among each other.

The different sizes of branches represent this picture. Yet, they stand with each other, for each other, they work together as a unit and that’s how the beauty of the tree is glorified.

The tree has a lot of connection with spirituality, not just in the recent times but a straight connection to the old and ancient times can be found deep within. There are thousands of sages who attained enlightenment when they sat meditating under big banyan trees in forests.

We have heard numerous stories in our childhood and can connect to banyan trees very well. This connection with the common man together with the rich cultural and spiritual significance it holds makes it apt for its declaration as the national tree of India.