Hockey was a game that originated not in India, but was received from the British when they ruled our country. The British had many associations of hockey in London and elsewhere and played it famously in their country.

When they came down to India to colonize and establish their power here, the local Indian community started taking the festival seriously, and they too began playing it.

Hockey, in those days considered of playing the game with a shaft in the hand, moving a small ball from here to there with the shaft and ultimately hitting a goal. This was the game plan in those days.

With time, the game underwent many changes. Revisions in rules plus the way it was played have all changed over the years. Modifications to the already existing rules and regulations have helped the game to keep up with the times and have changed the face of the game accordingly. 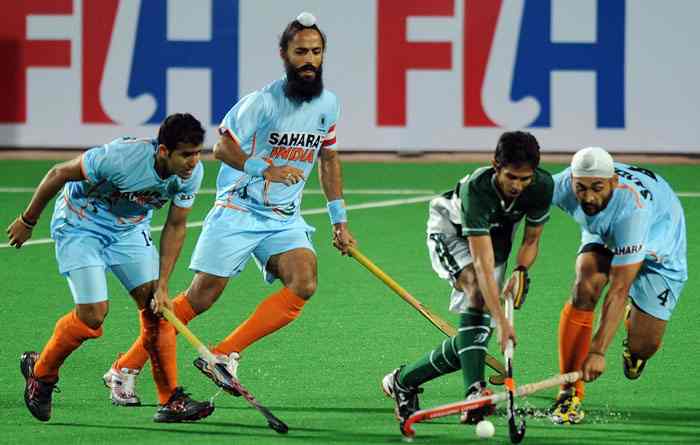 A simple game of hockey is played on a grass field. Two teams compete against each other. Each team is made up of eleven members, where there are ten players and one is the goal keeper.

If a player is able to strike a goal by missing the action of the goal keeper on the ball, then he earns a goal for his team. The ball should be struck only from within the designated boundary of the play area.

The Indian country learnt the game of hockey from the British undoubtedly. The year 1908 was a bright year for hockey in India as the first hockey association was formed in the country. This proved very fruitful for the country in terms of progress earned and fame gained in the game of hockey.

It was in the year 1928 that India entered the world scene in hockey for the first time by participating in the Olympics. This was held at Amsterdam. At this time, the game was played for duration of 35 minutes each. The total duration of the game was seventy minutes.

Between the two rounds of the games, the players were given a brief interval of two minutes. Hockey sticks were made from wood, and they had standard sizes, heights and weight specifications that had to be adhered to.

When India entered the global scene in hockey during the Olympics held in 1928, little did the countrymen knew it would bring enormous glory to the country and the countrymen and create history that would be written down in world records for centuries to come.

It was during the years 1928 to 1956 that India achieved the unachievable. A total of six Olympic medals, one after the other in the game of hockey were won by India, giving it a shot of international fame and soon after, people in India recognized the game with much respect.

This winning spree of six golden medals in the Olympic hockey was a feat achieved by the hockey team led by the famous Dhyan Chand, and they truly made a remarkable contribution to hockey on world stage. This highlight took the country to notice of its connection with hockey.

It was definitely a hugely remarkable feat of the Indian hockey team that the government came to recognize it as the national game of India.

Cricket surely is a better popular game on Indian streets, in comparison with hockey. But the way the game was led by our countrymen and showed stellar performances in world stage contributed factors making it the national game of the country.

In 1960, Olympics were held in Rome but unfortunately Indian hockey team could not achieve the gold medal this time.

They made a comeback to snatch the gold medal once again in 1964 and the team spelled success this time. This continued in the 1980 Olympics as well and the Indian team portrayed a very good performance in that year as well.

The trainers for the game along with dedicated players of the team made winning a possible feat during all the years that the game rose to fame in our country.

People consider the years from 1928 to 1956 to be the golden period of hockey in India as it as an achievement hardly achieved by any other nation in the world.

A continuous victory of that sort is achieved only by dedicated team spirit, hard-working members of the hockey community, an able leadership and a strong guidance. After the year 1980, the kind of stellar performances that once rocked the hockey team has since then become a rarity.

Owing to the popularity of cricket having widespread acceptance as the game that draws all kinds of crowd in India – right from a five-year toddler to a ripe old aged person, cricket runs through the blood of Indians and people worship the game with great fervor and devotion.

There is no written piece of evidence to indicate that hockey is actually the national game of India. It was thus in 2012 that the Union ministry of youth affairs came up with a public declaration that our country has no game that can be officially called its national game.

The controversy continues till date and only time can solve this issue of declaring a national game for our country.