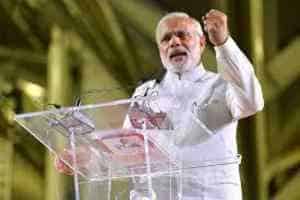 Narendra Modi is a name almost everyone in India is familiar with irrespective of which place in India they belong to, their mother tongue or their job profile. This is no surprise for the 14th Prime Minister of India from a party winning with an absolute majority in the General Elections.

He was born on the 17th of September, 1950 to a tea seller in Vadnagar in Gujarat as Narendra Damodardas Modi. He later went on to establish his own tea stall. As a child, he was introduced to the Rashtriya Swayamsevak Sangh (RSS) at a tender age of eight which later molded his ideals as he grew into a man, and a relationship that would lead him to do such great things that he could never have even dreamt of.

After completing school, he left home because of his unwillingness to abide to a life of forced arranged marriage. From around 1971, he became a full time worker for the RSS, visiting religious places, and holding meetings. However, because of his connections to a religiously volatile group, he was forced to take to hiding during the emergency of 1975.

In the year 1985, he was inducted into the Bharatiya Janata Party (BJP) where he held several positions of prominence and eventually rose to the rank of General Secretary in 2001.

Soon after becoming the general secretary of the BJP, he quickly went over to be the Chief Minister of Gujarat replacing Keshu Bhai Patel as he was ill. One of his most controversial incidents of his political career took place during this period as the chief minister. Few Muslim fundamentalist groups had allegedly burnt a train at Godhra.

This incited violence sentiments and a lot of Hindu fundamentalist groups took this situation as a means to slaughter Muslims in the State. It is alleged that Narendra Modi, being the Chief Minister did not intentionally take adequate measures that he ought to take for safeguarding the Muslims.

Because of his association with the RSS, people have accused him of fueling the riots for the furtherance of the Hindutva agenda. All these charges were however dropped later and he was exonerated. This incident caused him tremendous media defamation at that time.

Modi’s personal policies towards Muslims were increasingly coming under scrutiny by the Occident during his tenure as the Chief Minister of Gujarat in 2002. As a result, Modi was denied entry into the US by the State Department in line with the decision of the Commission on International Religious Freedom formed under the International Religious Freedom Act. Even the UK and the European Union denied him entry for about ten years.

During his second term as the Gujarat Chief Minister, he has done several developmental works. He promoted privatization and a small government. People also credit him with reducing corruption and red tape during his tenure.

He was also instrumental in the construction of groundwater conservation projects and check dams which helped in groundwater cleansing and recharge. 112 tehsils had groundwater level lower than the minimum required. With the efforts of Shri Narendra Modi, 60 of those had restored their groundwater levels back to normal.

Modi also promoted massive industrialization. He provided land to the Tata Nano Plant that was supposed to have been set up in Singur in West Bengal but could not because of large scale agitation from the land owners.

His work as the Prime Minister of India

Narendra Modi is the 14th Prime Minister of India and he has vowed that he will bring India the development it deserves after almost 70 years of independence. His policies of change and newness have stirred massive debates.

Shri Narendra Modi is a visionary. His vision of India is something that will put India in the global league with the big names such as America and China. His life is one filled with innumerable struggles.

From being a tea seller to the Prime Minister of this nation, his life is a saga of indomitable spirit and uncompromised hard work which led him to where he is now. We should all talk him as a role model and lead our lives to the fullness of its meaning.