Mountains are really very beautiful and refreshing landscape to look at. Speaking in the geographical terms, mountains are highly elevated part of land.

They attain greater height as compared to surrounding land. Mountains are one of the most prominent feature of the Earth’s landscape.

They symbolize perfection, success, strength and many other positive traits. The highest tip of the mountain is called it’s ‘Peak’.

Although there are other elevated land forms also like, Plateau, Cliff, Hills etc. but the height of mountain is greatest of all. The height of the mountain is calculated on the basis of mean sea level on Earth.

Being at the great heights, most of the mountains are covered with the thick layer of snow throughout the year. And this scenic & serene natural beauty provides good opportunity of recreation also, to the tourists.

Mountains generally have a broader base, while their top are narrower. At different altitudes of a mountain, different types floral & faunal species are found. Alpine and Coniferous forests are found at the mountains.

How the mountains are formed?

The Geo-morphological process of mountain formation is called ‘OROGENY’.

Basically, the formation of mountains takes place when the Earth’s crust is folded upward to a certain height.

This process is initiated mainly by the movement of plates on earth i.e. “Plate Tectonics” and volcanic eruptions. 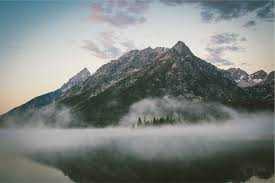 The Continental and Oceanic plates float on the molten magma (beneath the Earth’s crust).

Such movements cause displacement of these plates, causing friction among them at the margins.

And, because of this friction margins of the plates get deformed. In this whole process, one of the plate get submerged over the another while, the edge of other plate is folded upward.

This feature is called a Mountain. This process of plate movement creates folded as well as block mountains.

This can be well understood by the fact that, most of the world’s highest mountain ranges are located at the plate margins.

The molten MAGMA erupts out of the Earth’s crust through a vent. The rocky elements present in the MAGMA get deposited around the mouth of volcano (i.e. crater).

And over the time they attain greater height to be called as mountain, particularly Dome mountain.

The examples of volcanic mountains are – mountain in Japan, like Mount Fujiyama, Mount Vesuvius in Italy, Mount Kilimanjaro in Africa etc.

During the process of OROGENY, following types of mountains are formed.

Opposite to the above, block mountains are formed when forces beneath the Earth crust tend to pull a crustal region away in opposite directions.

This causes the portion of land in between two opposite moving lands to sink downward, called Graben while the other portion. While the other adjacent landmasses are called Horst.

Features formed—Rift Valley. When two landmasses move in opposite directions a depression is created in between, this is called Rift Valley.

When a volcano erupts, the molten magma comes out of it. This magma gets deposited around the mouth of volcano. After attaining a certain height overtime, it is called a Dome mountain.

Role of Mountains in the Environment and for Humans

When the moisture laden winds hit the giant mountains they cause the rainfall, which is called ‘OROGRAPHIC RAINFALL’.

Although these rains occur only at one side of the mountain called ‘Windward side’, while the other side called ‘Leeward side’ remains deficient of it.

And this gradually turns the region in Leeward side into a desert.

For example, the region in the east of Aravalli Mountains gets sufficient precipitation, while the region to its west has gradually got converted into the Great Indian Desert called Thar Desert.

They define the course of winds

Quite similar to above phenomena, the great height of mountains causes the winds to change their course, which improves air circulation and define the temperature of a region.

Like the strong cold winds from Siberia are interrupted by the great Himalayas. This keeps temperature of our country moderate. And saves northern India from shivering cold.

Abundant source of minerals and metals

As discussed earlier, the layers beneath the mountains have reserves of various precious minerals and metals, like coal, petroleum, precious metals etc. They play a very crucial role in economic development of the country.

Preserve fossils from our pasts

The layers of rocks beneath the mountain preserves under them fossilized remains of plants and animals.

These remains serve as basis of various botanical and zoological and geological research studies. They tell us a lot about earlier life forms which used to exist in the same region.

They possess the source of fresh water

The glaciers located at the height of snow covered mountains are the source of fresh water to our rivers, throughout the year.

Due to warmth of sun these glaciers melt, and keeps the mountainous rivers filled with fresh water.

Tourists, fed-up of monotonous and stressed city life come to such spots, gets rejuvenated with the freshness of mountains. Filled with this freshness they go back and get ready to face challenges of modern day life with full force and energy.

Besides providing recreation, mountains in many traditions are considered to be abode of god. Like in India, most of the temples of Goddesses are located at the height of mountains.

Similarly, the abode of lord Shiva that is, Kailash Range is located in the highest mountains of the world – the mighty Himalayas.

Mountains have been encouraging human beings to hold their head high, no matter what the situation is. They are not just a physical landscape, but an important defining factor for temperature of a region as well.

The great biodiversity of plants & animals, which they posses plays an important role in our ecosystem.

These and many other important features of mountain encourages us to preserve them in their original form.

Excessive extraction of minerals from beneath them creates disturbance to the landscape as well as biodiversity around them.

Therefore, we must recognize our responsibility towards this legacy of nature. And keep them as scenic and pure as we found them.